Even for the Battle of Alberta, this was a first.

With 24 seconds left in the second period on Saturday night, Edmonton’s Mike Smith discarded his gloves and shed his mask, and invited Calgary’s Cam Talbot to join him at centre ice.

Never in the decades of discord between the Oilers and the Flames had their goalies fought.

It was over quickly, with Smith burying his counterpart beneath a barrage of punches.

For the fans inside Calgary’s Scotiabank Saddledome, it was the high point of a rueful evening.

Edmonton pummelled Calgary in a confrontation that hearkened back to the bloody brawls of the 1980s, when both ranked among the NHL’s elite.

They are not quite back to that level yet, but are growing ever closer and their rivalry has been revived.

The Oilers won in a knockout – 8-3 – in an encounter in which the teams combined for 100 minutes in penalties and players fought three times. Smith and Talbot were both ejected, leaving one emergency goalie to dress quickly in case he was needed to fill in for either side.

Hair was pulled, expletives were exchanged, Calgary’s David Rittich was yanked from the net and then forced to return.

After flipping his stick in the air Jose Bautista-like after making a game-winning save in a shootout against Edmonton earlier in the week, Rittich stopped six of 28 shots and got chirped at by the Oilers bench when he was yanked trailing 4-1 in the second period. “Sometimes, what goes around comes around,” Smith said.

Nary a single pie was tossed nor were brass knuckles brandished. Maybe next time, when these two meet on the Stampede Grounds on April 4. It is the last game of the season and highly likely to have playoff implications.

“We hate each other,” said Kailer Yamamoto, Edmonton’s 21-year-old wisp of a rookie. “The hatred is real.”

Yamamoto and Zack Kassian each had goals within the first 65 seconds and the rout was on. It is noteworthy that the latter was never among the combatants on a night in which his arch-nemesis, Matthew Tkachuk, was embroiled often.

The first fisticuffs occurred in the first period between the Oilers’ Jujhar Khaira and the Flames’ Buddy Robinson. It ended with Khaira wrestling his adversary to the floor.

Tkachuk and the much smaller Ethan Bear tussled next, with Calgary’s all-star forward losing style points for tugging on his opponents long locks.

That happened only seconds before Smith and Talbot met in the featured bout.

It was the first bit of pugilism between NHL goalies since 2013, when the late Ray Emery of Philadelphia lit into Braden Holtby of Washington.

Edmonton was ahead 6-3 when things took a turn from nasty to outrageous right before the second intermission. Talbot became enraged and began punching Sam Gagner after the Oilers forward dug at a puck in his mitt.

At that point, bedlam ensued all around. All 11 players other than Smith, who was at the opposite end of the rink, were locked in someone’s grip. Then Smith proceeded to mid-ice and leaned on his stick and waited for Talbot.

“He obliged,” Smith said, with a wry smile.

Neither had been in a fight before. Between them, they have played in more than 900 games.

“I let my emotions get the best of me,” Talbot said.

When they were finished, sticks and gloves were scattered all over the ice. It was such a mess to clean up that the referees ordered them to their dressing rooms for a time-out. The final seconds of the second period were played immediately before the start of the third.

“This is incredible theatre,” Hockey insider Elliotte Friedman said during a break in the Hockey Night in Canada telecast. The officials called the game with one second remaining on the clock. No telling what could have happened. At that point, the Flames’ Noah Hanifan and the Oilers’ Patrick Russell were beginning to scuffle.

Between them, the teams were cited for 22 penalties. Edmonton won behind two goals from Connor McDavid and four assists by NHL scoring leader Leon Draisaitl. Calgary was outshot and embarrassed before a national television audience.

“If you are not angry about what happened tonight and it is not bothering you, then we probably have an issue,” said Geoff Ward, the Flames coach.

Edmonton is 8-1-2 over its past 11 games and leapfrogged into second in the Pacific Division behind Vancouver. Calgary dropped to fourth from second.

“It was good old-fashioned hockey,” Smith said late Saturday. “It got the juices flowing.” 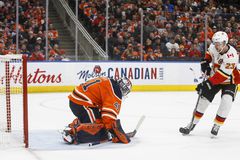 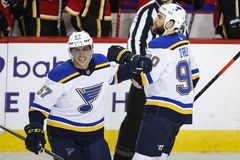 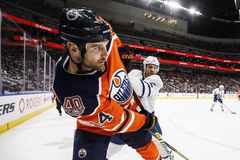