It wasn’t a smooth path to victory Wednesday night but the Edmonton Oilers still found a way to grind out a 3-2 decision over the Winnipeg Jets.

“It was a choppy, mixed up game,” said Oilers coach Dave Tippett. “We’ll just take the two points and move on.”

The referee’s whistle echoed through the empty stands of Rogers Place repeatedly on Wednesday.

The plethora of calls interrupted the flow on the ice, said Oilers forward Leon Draisaitl, who scored twice.

“It was a little bit of a weird game,” he said. “I think it was a hard game for a lot of guys to get into on both sides. I thought we handled it OK. Obviously two points are two points so that’s the most important thing.”

Draisaitl had a power-play tally after Nathan Beaulieu was called for tripping midway through the second frame that eventually stood up as the winner.

Winnipeg goalie Connor Hellebuyck dived to stop a shot by Ryan Nugent-Hopkins, but couldn’t control the rebound. The puck popped out to Draisaitl, who rifled it in under the crossbar for his second of the game and 10th of the season.

The Oilers were 1-for-6 with the man advantage.

Jesse Puljujarvi also scored for the Oilers (10-8-0) and captain Connor McDavid notched a pair of assists, including his 500th NHL point.

The Oilers captain sliced a pass to Puljujarvi at the top of the slot and winger took a couple of strides before ripping a wrist shot past Hellebuyck to open the scoring 3:45 into the game.

“Any time you can play with the lead, it’s always easier. It’s tough to chase the game,” McDavid said. “But I thought they did a good job of sticking with it and getting themselves back into it. And I thought we did a good job of kind of holding them at arm’s length.”

Mike Smith returned to the goal crease for Edmonton on Wednesday. The veteran netminder was yanked after giving up four goals on 11 shots as the Oilers dropped a 6-5 decision to the Jets on Monday.

Smith had 33 saves in his fourth game of the season Wednesday.

“(The Jets are) a good team. I mean, hats off to them,” the goalie said. “There’s some real good players over there and they’re going to create chances. Obviously you’re just trying to make saves at important times in the game when it’s close and we were able to get on the board early tonight and get them chasing. That always helps.”

Hellebuyck stopped 27-of-30 shots and the Jets were 1-for-5 on the power play.

Despite the final result, Jets coach Paul Maurice liked the way his team played on Wednesday.

“You walk off the bench in a bad mood every time you lose a game but it wasn’t a missed opportunity,” he said.

“They played hard, we played hard. Their goalie was good, our goalie was good. The flow of the game was tough to get a handle on but I thought we were trying to grind through it. So we won’t spend too much emotional energy on that one.”

Both teams will be back in action on Friday. The Oilers will be in Calgary to battle the Flames while the Jets head to Vancouver for a tilt with the Canucks.

Edmonton’s Ryan Nugent-Hopkins registered two assists Tippett earned his 600th win as an NHL coach. Scheifele extended his point streak to eight games. He has five goals and seven assists across the stretch. 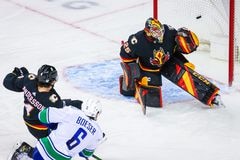 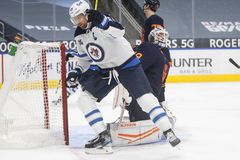 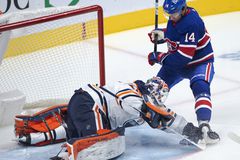