It was a place for hockey memories, but Wayne Gretzky’s restaurant in Toronto became much more than that. A generation of sports fans have met there for pre- and post-game meals. It has hosted celebrity-laden parties where Michael Jordan rubbed elbows with Cindy Crawford and Kid Rock did an impromptu set with the house band.

It was the Great One’s first major business venture outside of hockey – Forbes estimates he is worth about US$200-million now – and soon it will be no more.

The sports bar and accompanying rooftop patio at 99 Blue Jays Way will likely close early next year. The Bitove family, which has operated the business in a partnership with Gretzky for 26 years, has sold the property to a developer who plans to build a condominium. The neighbouring Second City comedy club will be ousted as well, although it will relocate elsewhere in Toronto.

The Bitoves are open to finding another location but have no plans for that at present.

“I am feeling emotional about this,” Tom Bitove, the managing partner of Gretzky’s Toronto, said on Friday. His brother, John, was one of the original owners of the Raptors. "I watched my kids grow up here and they are in their 30s now and I watched Wayne’s kids grow up here, too.

“Memories are flooding back to me.”

The restaurant opened on Aug. 17, 1993 – six years before Gretzky ended his playing career. The Blue Jays were in the midst of making a run toward winning their second successive World Series.

“I remember it like yesterday," Tom Bitove says. "Wayne was here and the place was just insane."

“It was just a magical night," Bitove says.

He grew up a Maple Leafs fan but couldn’t help but admire Gretzky’s Edmonton Oilers. The Great One led them to four Stanley Cups in five years at the height of his career.

He jumped at the opportunity to join Gretzky in the business.

“Wayne didn’t want to drive the process, but he wanted to be part of it," Bitove says.

It was Gretzky’s suggestion to place Grandma Gretzky’s meatloaf on the menu, as well as pierogis, reflecting his Eastern European heritage. The restaurant also serves a Great One burger with the No. 99 charred in the bun, and birthday cakes in the shape of a puck. The handles of the front door look like the underside of skates.

Gretzky’s Toronto is mostly famous for the treasure trove of memorabilia on display. The place is full of jerseys and photos and pucks and skates and sticks – and even game-by-game tally from the season when he scored 378 goals and had 139 assists when he played for the Brantford Nadrofsky Steelers as a 10-year-old.

The skinny kid who honed his skills on a backyard rink on Varadi Avenue in Brantford holds 61 NHL records, among them being the top scorer in history.

Most of the collection belongs to Gretzky and his father, Walter, and will be returned to them. The Bitove family owns some items and has not decided yet if they will be kept.

Gretzky also has a large collection at his Studio 99 restaurant at Rogers Place and operates a restaurant and wine and whisky bar at the Edmonton International Airport.

He has amassed great wealth by investing in many businesses since the conclusion of his playing career. He is currently a partner and vice-chairman of the Oilers.

Gretzky’s Toronto announced the impending closure on Thursday and is inviting customers to share favourite memories via social media.

Bitove says he has far too many to mention, but immediately conjures up a few.

There was the day in 2002 when Team Canada won the gold medal in hockey at the Olympics for the first time in a half-century and the place went wild. There was the boisterous celebration in 2010 when Sidney Crosby scored to win another gold-medal game. There was the amazing party Chris Chelios hosted after being inducted into the Hockey Hall of Fame. Jordan, Crawford, Kid Rock and John McEnroe were among the guests.

And there was the day in June, 1994, when Gretzky’s opened its rooftop bar.

Gretzky and his wife, Janet, sat beside Brian Burke and watched on TV as police pursued a famous celebrity and murder suspect on a Los Angeles Freeway.

The Great One at the Great Wall: Gretzky attempts to bring his brand to China, and the game with it
September 18, 2018 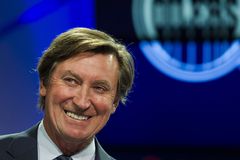 Northlands Coliseum, the house that Gretzky built, is closing its doors
September 13, 2017 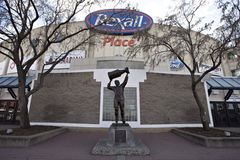