The Maple Leafs know learning how to win when you’re far from your best is part of what makes good teams great.

Auston Matthews extended his career-high goal streak to eight games with the winner midway through the third period before Alexander Kerfoot added some insurance just 11 seconds later as Toronto awoke from a 40-minute slumber to defeat the Vancouver Canucks 3-1.

After throttling the same club 7-3 on Thursday and 5-1 two nights later, the Leafs were down 27-7 on the shot clock – but tied 1-1 – through two periods thanks to Frederik Andersen’s standout performance in net.

“That was an ugly one,” said Matthews, who also extended his point streak to 10 contests. “Freddie really took control of the game. He was our best player by far tonight, and just kept us in it. Those first two periods, we didn’t really have an answer.

“They came with a good push to start, and we just didn’t have our best.”

Morgan Rielly provided the rest of the offence for Toronto (10-2-1), while Andersen made 31 saves as the Leafs swept the spiralling Canucks three straight at Scotiabank Arena. Mitch Marner added an assist to extend his point streak to eight.

“We got away from what’s made us successful,” Kerfoot said. “They took it to us a little bit. That’s credit to them, but we certainly played into their hands.”

Elias Pettersson replied for Vancouver (6-10-0), which lost a fifth straight in regulation to close out a miserable 1-5-0 road trip. Braden Holtby stopped 16 shots for the Canucks, who put in by far their best performance of the last week, but still came up snake eyes.

Vancouver head coach Travis Green said Monday looked a lot more like the team that made the second round of last season’s playoffs.

“We played with a lot more urgency,” he said. “I don’t know if we could have played any better in the first two periods ... probably deserved to be up.

“Sometimes when it’s not going your way, that happens. You can play a really good game and not get the result.”

Coming off that combined 12-4 scoreline over the first two meetings, the Leafs looked like a shadow of their high-flying selves until Matthews scored his 11th goal of the campaign at 9:22 of the third. After winning an offensive zone faceoff, Toronto’s star centre took a feed from Marner in the slot and ripped a shot five-hole on Holtby through a screen for his 300th career point.

Ilya Mikheyev then stripped Quinn Hughes of the puck behind the Canucks’ net before finding Kerfoot in front for his second moments later to stun Vancouver.

Toronto his now 7-0-1 over its last eight to sit atop both the NHL and North Division standings, but head coach Sheldon Keefe was disappointed in his team’s performance through 40 minutes.

“You can’t even compare tonight’s game to the first two,” he said. “Our failure was just to adapt to the game. I thought we really controlled the first two games with the puck.

“The way they worked and competed and got on top of us made it a lot harder.”

The Leafs were minus gritty winger Wayne Simmonds, who suffered a broken wrist Saturday and will miss six weeks of action. Keefe dressed 11 forwards and seven defencemen, which meant sophomore blueliner Rasmus Sandin saw his first game action in nearly 11 months because of the COVID-19 pandemic.

But even though Sandin picked up an assist on the winner, his coach was second-guessing the move of not dressing 12 forwards once he saw how different the visitors looked.

“I was certainly regretting my decision once the game got going,” Keefe said. “I liked the fact our guys found their way through it.”

Holtby, who played consecutive games for the first time since signing with Vancouver, had to be sharp early in the third, flailing his glove at a Rielly shot from the slot as Toronto started to show life. The Canucks then killed off a penalty against the NHL’s best power play, but Matthews and Kerfoot eventually provided the winning margin.

“They came out a little bit harder than they did the first two,” Andersen said. “I’m really proud of the way they stuck with it in those two periods and didn’t start cheating for offence.”

After a timid opening for both teams, the Leafs grabbed a 1-0 lead at 6:38 of the first when Canucks defenceman Nate Schmidt, who was in a battle in front, blindly kicked the puck right into an onrushing Rielly’s path for him to fire his second short side.

Vancouver came close to tying it up later in the period, but Andersen stretched to rob Justin Bailey.

Playing a league-leading 16th contest in 27 days since the start of the pandemic-shortened 2020-21 season, Vancouver eventually got the equalizer on a power play at 9:59 of the second when Kerfoot couldn’t get the puck out of his zone. Hughes then found Pettersson, who had time and space to whip his fifth past Andersen.

Pettersson now has four goals and five assists in his last eight games after registering just two points in his first eight contests.

The Canucks continued to outplay the comatose Leafs, with Nils Hoglander, who returned after taking a puck to the face in the first, coming close on a rebound as Vancouver carried the deciding edge in shots into the third.

“We didn’t really have any business being in that game,” Matthews said. “But we were able to stay with it and get the two points.

“That’s all that matters.”

The Canucks announced Tyler Motte has been placed on injured reserve, while defenceman Olli Juolevi was recalled from the taxi squad and inserted into the lineup along with winger Jake Virtanen. ... The teams play six more times in the NHL’s abbreviated season, with the next meetings set for March 4 and 6 in Vancouver. ... The Leafs visit the Montreal Canadiens on Wednesday for the first of two meetings this week. ... The Canucks open a four-game set against the Calgary Flames – including three at Rogers Arena – beginning Thursday. 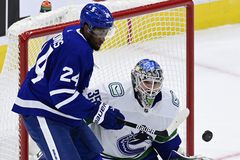 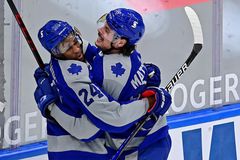 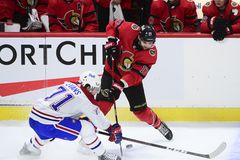