Frédérik Gauthier was frustrated recently when the Maple Leafs chose to scratch him from the lineup for four games.

On Saturday, he was inserted back onto the team’s fourth line and contributed a goal in a 4-1 victory at Edmonton over the Oilers. On Tuesday night, he scored the game’s first goal and added an assist in a 5-3 defeat of Buffalo at Scotiabank Arena.

“I knew [sooner or later] I would be put back in,” Gauthier said. “When you get the chance, you want to make the best of it.”

Auston Matthews scored twice, his team-leading 20th and 21st goals of the season, and Dmytro Timashov and Ilya Mikheyev also scored for the Maple Leafs. It was their fourth win in five games and moved them within one point of the second-place Sabres in the National Hockey League’s tight Atlantic Division.

Buffalo star Jack Eichel had a goal and an assist as he extended his points streak to 17 games. He was shut down in the first and second periods, but rose to the occasion in the third to cause some suspense, setting up Rasmus Dahlin to cut the lead to 3-1, before scoring himself to make it 4-2.

The 23-year-old centre’s 16 goals and 31 points since Nov. 14 are the most in the league. He is now second in the NHL in goals with 24, four behind David Pastrnak of Boston. He also became the fifth player to reach the 50-point mark this season.

“He is a tremendous player, and he is playing as good as he has ever played,” Toronto defenceman Tyson Barrie said. “The goal he scored came on a world-class shot. That’s pretty hard to stop.”

In two previous meetings with the Maple Leafs this season, Eichel had two goals and one assist. In four-plus years, he has more goals (14) against Toronto than any other team. In 16 career games against the Maple Leafs, he has 22 points.

“I think he has always been ultra-talented, but he has seemed to take a real step up in his play,” John Tavares, the Toronto captain, said. “He is one of the best players in the league.”

The game was the Maple Leafs’ first at home in two weeks and the first of four they’ll play over six days. They face the Rangers in New York on Friday before returning to Scotiabank Arena against Detroit on Saturday and the Carolina Hurricanes on Dec. 23.

Toronto now sits in third place in the division. The Leafs won three of four games last week on a road trip that began with a victory over the Stanley Cup-champion St. Louis Blues and included wins over the Canucks and Oilers.

The triumph over the cross-border rival was critical at this point, with there being little chance of catching Boston to win the division. But Toronto gained on Buffalo, and picked up a point over the fifth-place Florida Panthers, who were idle. Montreal, with whom the Maple Leafs were tied with at 36 points entering the night, played a late game at Vancouver.

Toronto is 17-14-4 overall and 8-4 since Sheldon Keefe replaced Mike Babcock as head coach.

“I think [this] speaks to the potential of the team because we’re still nowhere near what I think we can look like and what we’re capable of, but we’re doing a lot of good things,” Keefe said afterward. “I still think there’s a long way for the team to go and continue to grow.”

The Maple Leafs grabbed 1-0, 3-0 and 4-1 leads and then had to fend off the charging Sabres, who scored all three goals in the third period.

The Maple Leafs scored on their first shot of the game. Gauthier snapped a puck past Linus Ullmark from 27 feet away only two and a half minutes after the puck drop. They are 10-3-1 now when scoring first and 8-2-1 when leading after the first period.

They repeatedly gave up the first goal of the game at the start of the year but seem to have corrected it.

“I really liked our start in the game,” Keefe said. “Once again, we found a way to play with a lead. Obviously, that's an area we want to be good at. We want to set ourselves up to win games.”

Matthews scored twice in the second period. The first of the two came off a crisp pass from Morgan Rielly. William Nylander and Tyson Barrie, back in the first defensive pairing after missing a game with a foot injury, were awarded assists on the second. Barrie had a second assist on a third-period goal by fourth-line winger Dmytro Timashov, who has been a healthy scratch in half of Toronto’s last 16 games.

Their final goal came on an empty-netter on a power play by third-liner Ilya Mikheyev. Third- and fourth-line players have now scored six goals over the last two games.

Frederik Andersen had 36 saves in the victory over Edmonton on Saturday and was back in the net for the eighth straight game. He entered the night tied for most wins in the league (16) with Washington’s Braden Holtby, Jordan Binnington of St. Louis and Winnipeg’s Connor Hellebuyck.

Andersen was not very busy early on but he did make two important saves in the first period, stopping a hard shot by Marcus Johansson 26 seconds before Gauthier scored, and stymieing Kyle Okposo’s attempt to tie the game at 1 on a hard shot off a rebound. Okposo beat him later to cut Toronto’s lead to 4-3 with 5:19 on the clock.

Andersen was shaky in the third period, and finished with 27 saves.

The Maple Leafs had to kill off a late penalty while holding a 4-3 lead. They not only accomplished that, but scored shorthanded when Mikheyev found the open net with 2:34 left. That sealed the victory.

Gauthier had two goals over the first 28 games and now has doubled his total in the last two. He is feeling better about his role on the team.

“I just got to keep it going,” he said. “I want to be the guy they go to when they make a choice.” 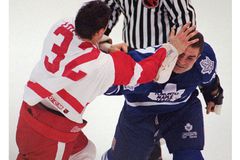 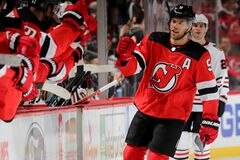 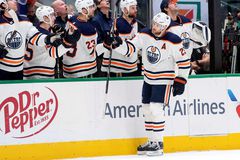