The Maple Leafs were less than two minutes from celebrating a critical victory on Tuesday night when one of their key players crumpled to the ice with a possible neck injury.

After banging his head against an opposing player’s knee, Jake Muzzin attempted to get up but was unable. The game, which Toronto won 3-0 to even its best-of-five playoff qualifying series against the Columbus Blue Jackets, was delayed for 15 minutes as he was tended to by trainers and medical workers.

“It is difficult to see a guy everyone loves so much lay down and not be able to get up,” Toronto goalie Frederik Andersen said.

With 1 minute 52 seconds remaining, Muzzin was knocked down behind his own net by Pierre-Luc Dubois of the Blue Jackets. As he tried to stand, Muzzin’s head struck the leg of another Columbus player, Oliver Bjorkstrand.

His worried teammates kneeled and watched in silence as a trainer supported Muzzin’s neck as he lay on his back. Team president and alternate governor Brendan Shanahan stared down, concerned, from a suite in Scotiabank Arena. As he looked on, Nick Foligno, a veteran Columbus player, shook his head.

Muzzin was conscious and could be seen talking and moving his extremities. Eventually, a backboard was slipped beneath him and he was wheeled off on a stretcher with his head tightly restrained. Players on both teams tapped sticks against the ice as he was taken away.

“It’s a little worrisome when you see the stretcher come out,” Leafs forward Mitch Marner said. “We are praying for him. There are a lot bigger things than hockey.”

Head coach Sheldon Keefe said that Muzzin was alert as he was taken to hospital for an assessment. Even if he could return to play, it is unclear how long he would have to quarantine after leaving the bubble that has been established to protect the NHL’s Eastern Conference teams from the spread of COVID-19.

The decision rests with the hub site’s medical and event directors and depends on the type and degree of exposure he is subject to outside the secure zone.

The apparent injury to Muzzin, one of only two players on the Toronto roster to have won a Stanley Cup, cast a pall over an otherwise encouraging performance by the Leafs. They outshot Columbus 39-20 and dominated the contest from start to finish.

Toronto’s goals came on a deflection by Auston Matthews with four minutes remaining in the second period, on a breakaway by John Tavares nearly five minutes into the third and on an empty-netter by Morgan Rielly with 43 seconds left.

Andersen turned away all 20 Columbus shots and has now stopped 53 of 54 in the two games. On Tuesday he became the first Leafs goaltender to record a shutout in the playoffs since Ed Belfour had one against the Ottawa Senators in April, 2004. Game 3 of the series will be played on Thursday night.

The victory kept Toronto from falling into an 0-2 hole in the Return to Play series, whose winner will advance to the first round of the Stanley Cup playoffs. In 56 previous best-of-five-game postseason series before this year, only one team has ever won after losing the first two.

The Blue Jackets took the lead with a 2-0 victory on Sunday in which goalie Joonas Korpisalo was impeccable and their defence severely limited the Leafs’ chances. The sequel was much different, with most of the the action occurring at the Columbus end of the ice. Its offence was so lifeless that John Tortorella, the visiting team’s head coach, was seen shouting at Dubois as he sat on the bench during the third period.

“Every game is going to be slightly different and have its own personality,” Keefe said. “Today I thought we fore-checked really hard right from the start and some loose pucks became available and gave us an extra opportunity to attack the net.

“Our guys brought it to another level today from a competitive standpoint and that really helped us in all regards.”

Korpisalo stood out again, stopping numerous dangerous shots that appeared destined for the back of his net. It took the Leafs 96 minutes and 55 shots to finally get one by him. At one point, Tavares was so frustrated that he skated off the ice with eyes cast skyward as if he could not believe what he had just seen.

“I thought there was a couple [of shots] that were deflected and were a little bit more fortunate on his side, but he’s obviously playing really well,” Tavares said. “He is a really good goalie and made some great saves. I just tried to focus on the next shift and the next opportunity.”

It took him eight shots before he finally beat Korpisalo with a shot below his right arm on the breakaway.

“On the goal, I was our last forward coming back and I kind of anticipated that the puck might be coming the other way,” Tavares said. “I was able to get a good bead on it and lucky enough to get that opportunity. It was nice to finish it off, especially after some of the chances I had.”

Toronto outshot Columbus 15-6 in the first period, but failed to score despite having two power plays. The Blue Jackets were so overrun that it looked as if they were simply trying to survive the first 20 minutes and get back to their dressing room to regroup.

Korpisalo made a handful of tough saves, including snatching a hard puck out of the air off of a wrist shot by Matthews.

Andersen, who was beaten by Cam Atkinson on a low shot to his right side on Sunday, was immediately tested in the same spot by Boone Jenner. This time the Toronto backstop deflected it away.

Kyle Clifford seemed to energize Toronto early on with a crushing hit on Dean Kukan behind the Leafs net. Clifford, acquired from Los Angeles because of his grit and playoff experience, barely played three minutes in the series opener. He previously won two Stanley Cups with the Kings.

Nearly all of the second period was played in Columbus’s end, as the Leafs controlled possession. Korpisalo continued to thwart them, rejecting shots by Matthews, Kasperi Kapanen and Tavares multiple times. They finally scored on a nice exchange of passes between Matthews and Zach Hyman as they charged down the ice.

After taking a feed from Matthews on the right wing, Hyman skittered the puck in front of the net, where Matthews deflected it over the goalkeeper.

“I was excited,” said Matthews, who failed to score on six shots on Monday. “It’s the postseason, everything is tight out there and goals are hard to come by. It was nice to get that one and kind of jump-start a nice push.”

The Leafs emerged from the game in a much better position than when they entered it, but their biggest concern is the health of Muzzin.

“It’s very tough seeing one of your teammates go down, especially him,” Tavares said. ”You know the type of warrior he is. What he brings to our team is unmeasurable.”

Opinion
Leafs can do the league a solid by eliminating boring Blue Jackets
August 4, 2020 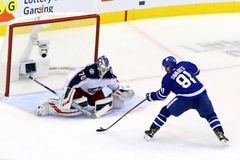 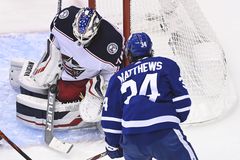 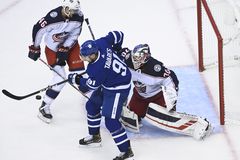