In February, the NHL entered an equity partnership with PointsBet, an Australia-based sportsbook that operates in the United States.

On Tuesday night, NHL referee Tim Peel got caught on a hot mic during a Detroit-Nashville game. It was midway through the second. The Predators were leading 1-0, when he called a tripping penalty.

During a stoppage, a voice – apparently Peel’s – breaks into the broadcast and can be heard saying that “it wasn’t much,” but he wanted to give a penalty against Nashville. Then the voice cuts out.

On Wednesday morning, 12 hours after the incident, the NHL fired Peel.

It is difficult not to see a line connecting that chain of events.

Everyone who watches hockey understands that officials are conductors as much as they are enforcers. They maintain the rhythm of the game. As best they can, they keep it fair. Sometimes, in the search for that unobtainable standard of fairness, two wrongs make a right.

Presumably, that sort of make-up call is what Peel was talking about before someone hit the panic button.

But everyone who watches hockey isn’t wagering on it. If you’ve bet the under, you do not want to hear that the Tim Peels of the world are out there righting wrongs with a penalty that “wasn’t much.”

Maybe this is why the NHL didn’t just let Peel slip out the back door holding a box of framed photos. That wouldn’t put enough shiver through the rest of the herd. So it buried him instead.

“Nothing is more important than ensuring the integrity of the game,” NHL senior vice-president Colin Campbell said in a statement. “Tim Peel’s conduct is in direct contradiction to the adherence to that cornerstone principle …”

Peel is a 22-year veteran of the NHL. He’s officiated more than a thousand games. He’s done an Olympics. For someone lacking in integrity, he sure managed to carve out a pretty decent career for himself.

Elsewhere, the league said that Peel “no longer will be working NHL games now or in the future.”

“In the future”? Was that part necessary? It sounds more like a curse than a press release.

Peel’s mistake wasn’t doing anything wrong. He did what every official in every sport does in every game ever played – rather than strictly adhere to the rules as written, he used his best judgment born of a long, intimate experience in the game.

If the umpire misses a strike, he makes it up later with another that’s four feet outside. If the football official gets that holding call wrong, he tags the other team with one as soon as possible.

And your average NBA referee? Don’t even get us started. Every game is a three-hour series of borderline calls, bad calls, makeup calls and non-calls. The basketball is incidental.

There are the official rules and there is the Code and the two things only occasionally overlap. Everyone knows this. It’s not “fair” – in quotation marks. It just is.

This dissonance was supportable as long as everyone involved in the coverup was a hockey person. Fans scream about the refs and their stupidity, but they are part of the conspiracy, too.

When their team gets jobbed by the ref, they pray for the ref to job the other team right after that. That’s half the fun of watching hockey. No hockey person wants that to change.

If you’ve read this far, you understand how this works as well as anyone. But I bet you’d have trouble explaining it to someone who’s never watched hockey – “Sure, there is a rule for that. But the rule doesn’t apply when we’re up by three, or with less than two minutes to go. No, there isn’t a rule for that part of it. Everyone just knows. Knows how? I don’t know. They just know.”

Now, suddenly, a wrinkle in our (mostly Canadian) conspiracy of the silence – the arrival of the NHL’s “official sports betting partners.” It’s not just PointsBet. It’s MGM Resorts, FanDuel and William Hill.

The betting organizations don’t care about your ancient codes and secret handshakes. What they want is the promise of an unbending line between their customers’ money and the game’s outcome, and officials pledged to see it stays straight.

Peel pointed out the lie in that promise. So in the time it takes to get everyone who matters in on the e-mail chain, the NHL turned him from a person into an example.

How will this new policy of “integrity” affect hockey? It won’t. On the ice, everything will stay exactly the same.

What will change is the nature of the written rules vs. real rules conspiracy. That will go further underground. Maybe they’ll change the password at the door more often.

Woe betides the coach who goes in too hard on the refs in the next little while. You can be angry, but you better take the word “fixed” out of your vocabulary. Remember what happened to Tim Peel.

Players may find their colleagues in stripes a little jumpier for the next little while. Maybe don’t goad them quite as much. They’ll think you’re trying to get them fired. Remember Tim Peel.

And refs? They should avoid hot mics. Any sort of mic, really. If they try to put one on you, tell them you have a skin condition. If they hold one in front of you, start coughing. Remember Tim Peel. 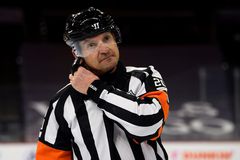