The Chicago Blackhawks blueline usage has become a major story this postseason, one that continued on Tuesday, in a game that stretched late into the night.

It's a good thing they won, 3-2, deep in the third overtime because it's hard to imagine their top defencemen were going to have enough in the tank to rally from two games down, needing to win four of the series final five games against a deep Anaheim Ducks team.

Chicago is in tough here, and what's happened with their defence is a big reason why.

The Blackhawks aren't the first playoff team to go deep relying heavily on four D. Heading into Game 2, they were giving 80 per cent of their minutes to their top quartet (Duncan Keith, Brent Seabrook, Niklas Hjalmarsson and Johnny Oduya), which is right in line with what they did in 2010, when they won basically with five blueliners.

(That year, Jordan Hendry was the sixth man and played only eight minutes a game.)

The average Cup winning team in the salary cap era has given 41 per cent of its minutes to its top two on the blueline and 75 per cent to its top four.

The most extreme usage in that time frame was the 2007 Ducks, who under Randy Carlyle leaned hugely on Chris Pronger, Scott Niedermayer and Francois Beauchemin. In all, Anaheim's top four logged almost 84 per cent of the minutes on the back end, easily the highest figure.

Joe DiPenta? His Cup ring came after a lot of minutes on the bench.

So the problem for Chicago isn't that what they've done to date is out of line with teams that have won in the past. The problem is that, minus Michal Rozsival – who broke his ankle in horrendous fashion late in Round 2 – they're pushing things into territory beyond even that.

Tuesday's Game 2 was an extreme example. The Blackhawks and Ducks played nearly two full games before Chicago's Marcus Kruger ended it with the winner with four minutes left in the third overtime just after 2 a.m. ET.

With Rozsival out, Quenneville had dressed veteran minor leaguer Kyle Cumiskey as his sixth defenceman, a player that hadn't played in nearly six weeks in an AHL regular season game. The Blackhawks have also been reluctant to play 40-year-old Kimmo Timonen.

The result? In those 116 minutes, 12 seconds, the vast majority went to Chicago's top four. Keith played 50 minutes. Seabrook and Hjalmarsson were just short of 48 minutes, and Oduya had 46.

Cumiskey and Timonen were under 20 – including Timonen getting only 6.5 of the 56 overtime minutes – and a good stretch of that time wasn't pretty.

The Blackhawks four top defenceman played roughly 85 per cent of the game, which is well past the extreme example set by the 2007 Ducks team that had those two Hall of Famers eating minutes.

The concern isn't only wearing down Chicago's best four blueliners, three of whom are over 30. It's also that what looks like is going to be a long, grinding series with the Ducks could easily take one of them out of the lineup, even for a game, and there's not really a suitable option to step in.

Chicago isn't down to only its seventh defencemen. In addition to Rozsival, two promising young defenders, Trevor van Riemsdyk and Stephen Johns, are out for the rest of the postseason.

And the Blackhawks traded AHLers T.J. Brennan (to Toronto) and Adam Clendening (to Vancouver) prior to the trade deadline.

Any of those four could have been an option over Cumiskey, who spent the previous two seasons playing in the Swedish league.

Part of the story is certainly the salary cap. The Blackhawks moved Nick Leddy to the Islanders last fall largely due to their cap crunch and that's cost them some considerable depth at the NHL level. If you look back at their two Cup runs (2010 and 2013), Keith, Seabrook and Hjalmarsson were playing a combined 73.5 minutes a game.

That difference isn't all overtime games because they had some of those in their other runs to championships. And continuing to win like this likely isn't sustainable, not with the margins so thin between the remaining teams.

Quenneville is going to have to trust his depth D a little bit more than this to take the pressure off his big guys. Or they won't have anything left even if they do advance past the Ducks. 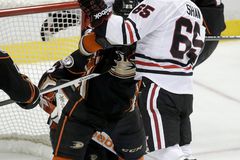 Blackhawks even series with Ducks after Kruger scores in third overtime
May 20, 2015 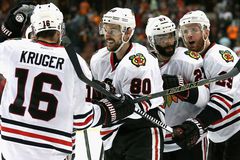 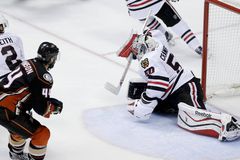 Duhatschek: Kesler offers resilient Ducks a major edge up the middle
May 14, 2015 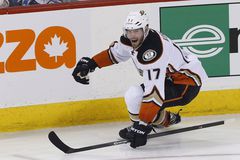 Blackhawks get time to recharge with long layoff before facing Ducks
May 13, 2015 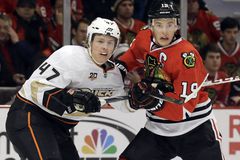