The Canadian captain was on the ice for four goals against the Czech Republic, finishing with one goal and two assists in a 6-0 win on Saturday evening.

It was the same kind of dominant performance Crosby offered at the end of the last NHL season, in which the now-29-year-old won the Conn Smythe Trophy in helping the Pittsburgh Penguins to a second Stanley Cup.

Michal Neuvirth made 44 saves in defeat, with Canada outshooting the Czechs 50-27.

Heavy favourites heading into the tournament, Canada took care of its first preliminary-round opponent as required. Division rivals from the United States couldn't say the same earlier in the day, dropping a 3-0 afternoon affair to Team Europe.

The Canadians next game comes against the Americans on Tuesday night.

If concluding as a resounding win, the first few minutes of Saturday's game were a little messy.

Czech winger Ondrej Palat came up with a quality chance just 41 seconds into the game and after Crosby was denied on a breakaway Canada took a pair of minor penalties. Canada was being outshot 6-1 after the first six-plus minutes.

Whatever early tension there was quickly evaporated. Canada gained steam in a hurry and after a few flurries at the offensive end broke through on the first goal of the game from Crosby. Grabbing hold of a rebound as he swung behind the Czech goal, Crosby flung a shot off the back of Neuvirth and into the goal.

Looking quick, while relentlessly pursuing the puck, Canada upped the lead to 2-0 with less than three minutes left in the first. After Bergeron won an offensive-zone faceoff, Crosby sent a backhand pass to Burns at the point. The NHL's leading goal-scorer from the back-end last season firing a blast that Marchand tipped past Neuvirth.

It was the second of three points for Marchand.

The Canadians kept coming even in the waning moments of the first. Crosby forced a Czech turnover in the offensive zone with just seconds to go, the puck scooped up by Marchand, who dished cross-ice to Bergeron. The 31-year-old found the back of the net for the 3-0 lead with less than a second remaining in the frame.

Bergeron and Marchand have been a seamless fit alongside Crosby since the opening day of training camp. Head coach Mike Babcock said Crosby was best when paired with speedy, intelligent players who pursue the puck. Crosby and Bergeron have been an effective tandem numerous times for Canada.

Screening the goaltender on the play was Crosby.

Crosby kept it coming in the second. Veering to his right across the slot, Crosby whipped a wicked backhand pass to his left, with Thornton there to tap it in on the doorstep. It was the first goal the 37-year-old had scored for Canada since the 2010 Olympics in Vancouver.

Toews and Pietrangelo both found the mark on separate power plays, becoming the fifth and sixth Canadian goal scorers.

Price was tested only occasionally by the Czechs, appearing much like the highly-reputed goaltender he was before injury last season. The 29-year-old was square to pucks and limited rebounds, his shutout preserved late in the second period when Roman Cervenka rang a shot off the crossbar.

If there was one primary fault for Team Canada, even in victory, it was discipline. The Canadians took six minor penalties after seven infractions in their final exhibition tilt against Russia earlier in the week. 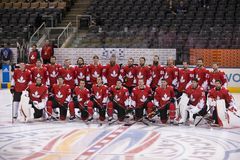 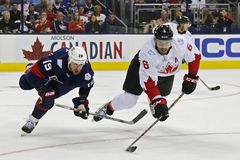 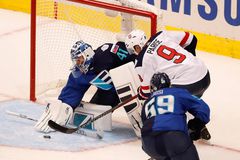