Mike Santorelli was settling in for a pre-game nap three years ago, on the road in a hotel room he shared with teammate David Booth, when he heard an odd burst of sound.

"I hear these noises," remembers Santorelli. "I'm trying to sleep."

The noises were, precisely, imitations of a wild turkey – gobbles, purrs and clucks. His roommate, an avid hunter, was practising his turkey calls.

"I couldn't even be mad," says Santorelli, a Vancouver Canucks centre. "I was just laughing, it was great."

Booth, a Canucks winger who turned 29 on Sunday and was a healthy scratch for three games before finally getting a start Monday night against the Los Angeles Kings, is one of the more unusual characters in the National Hockey League. He is proud of his hunting achievements, tweeting pictures of trophy kills. And he is an evangelical Christian – religion is another of his favourite topics on Twitter.

As his playing time in Vancouver has declined, he has taken to wearing a Canucks green camouflage ball cap. Head coach John Tortorella has called Booth "a weird dude" – mostly meant in a good way. Teammate Chris Higgins, who, like Santorelli, previously played with Booth in Florida, calls him "unique" and "happy-go-lucky."

On the ice, Booth is supposed to be a top-six winger and producing at least 20 goals for his $4.5-million salary this season. He currently has only one goal, and that matches his total of last season. Injuries have badly slowed Booth, and that deprives the Canucks' anemic offence of a once-prolific scorer. It also leaves Booth without much of a future in Vancouver – he's a buyout candidate unless he somehow regains his old form.

It's not been a good month. Booth was demoted to the minors for a week earlier in November, and then last week, when he was benched, team boss Mike Gillis called him out on a Team 1040 radio show, saying: "We need him to play harder and play with more tenacity on the puck." Late Sunday, on his birthday, Booth leaned on God in a tweet: "You keep me going when times are tough – my foundation since my childhood. Ive hung on u from the day of my birth, Ill never run out of praise."

Faith is a constant. In a recent interview, Booth cited giving a full effort as a "biblical principle," adding, "I still have plenty of good hockey in me."

Booth scored 22 goals in his second NHL season and 31 in his third, but was then waylaid by injuries. His downhill playing spiral began with a concussion caused by a blindside head shot from Philadelphia's Mike Richards in 2009. He recovered to score 23 times in 2010-11, the season he roomed with Santorelli in Florida and just before he landed in Vancouver. His first year with the Canucks, even as a knee injury kept him out of a chunk of games, Booth produced 16 goals in 56 games with strong two-way play. Last year, in the 12 games he played, the Canucks were better with him on the ice than not – but he scored just one goal, an empty-netter. His season was over by mid-March after he suffered a severe ankle break that required surgery to repair.

It wasn't until mid-August that he could skate with any vigour. The six-foot, 212-pound winger said he got up to 237 pounds over the summer with all the upper-body work he did. Given that his game is based on skating, speed to underpin his physical power, it has been hard to make up ground lost to everyone else in the league – and he may not catch up this year at all.

A week into this season, Tortorella produced the most telling and evocative, if vague, take on Booth. Calling him a "weird dude" and a "different personality," the coach went on to further explain: "I like his personality. I think he's inquisitive, is a good way to put it." But Tortorella – who owns four dogs and volunteers time and money in support of animal welfare – definitely doesn't like Booth's hunting hobby. "I'm not crazy about him …" said Tortorella, before hemming his words, "uh, well, I'll just leave it at that."

Tortorella was prodded at the end of his press conference that day and mentioned, before exiting, "He shoots animals."

Booth's most controversial kill came after the 2012 playoffs.

For a show on a niche network, Wild TV, Booth killed a black bear with a bow in Alberta after luring it with a pile of bait, a mix of molasses, beaver, and oatmeal. Bear baiting is illegal in British Columbia and numerous U.S. states. Booth broadcast his exploits on Twitter.

His religion has also stirred debate on Twitter, and when there were questions and critiques for which he had no answer, he sought to learn more about his faith. Last summer he attended a week-long seminar in England with Ravi Zacharias, an Atlanta-based preacher. "I went over there to have conversations, not to say, 'You're wrong, I'm right, and this is what I believe,'" says Booth.

Booth knows the on-ice questions can only be answered if he and several other supposed Canucks snipers start putting pucks behind opposing goalies. His coach hasn't given up on him. "We feel," says Tortorella, "there's value there." 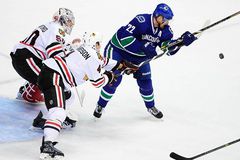 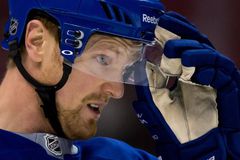 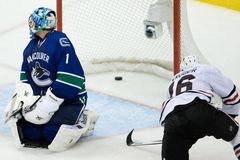 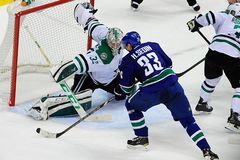 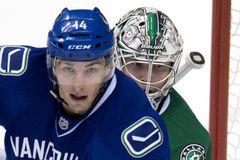