His first point in the NHL, notched in his second game, was an assist – which is no surprise from the Swede who's flicked so many fantastic wizard-like passes in his career.

The only unusual thing was Henrik Sedin's first assist wasn't on a goal by his brother, Daniel. Instead, it came as Sedin fed defenceman Ed Jovanovski in overtime against the Florida Panthers for a game-winner.

On Tuesday in Vancouver – as the Canucks won their NHL-best sixth consecutive game, 2-1 over the Minnesota Wild – Sedin was kept off the score sheet, which is not as unusual this years as in years past. He remains one point behind former Canucks star and Swedish countryman Markus Naslund as Vancouver's all-time scorer.

Naslund registered 756 points over a dozen seasons, and Sedin, in his 12th season, stands at 755, which puts him at No. 169 on the all-time NHL ledger.

It was a feisty night in Vancouver, as the Wild scrapped at the Canucks and particularly picked on the Sedins. Henrik Sedin, who hasn't scored a goal this year, was driving with an added push in response, but his passes didn't quite connect and he couldn't find the back of the net, facing rookie Darcy Kuemper in his NHL debut.

The Sedins, so far this year, are not nearly the players they were during their 2009-11 heyday. In their first 10 games of 2013, the twins' collective output was 14 points – their slowest start in nearly a decade. Even so, the Canucks are winning, now 8-2-2, as Vancouver rides great goaltending and scoring from most of its roster. But what role the Sedins play, as the season unfolds, will be a central factor if Vancouver is to make a serious bid for the Stanley Cup.

General manager Mike Gillis has said several times the precise finesse game the Sedins orchestrate takes time to find its rhythm, and this truncated season, with its blink-and-you-missed-it preseason, means the twins haven't yet honed their typical Sedinery.

But, perhaps, the gravity of age, as it does for all hockey players, begins to weigh. The Sedins may be fitness fanatics but they turned 32 in September. Their best seasons, measured on the scoreboard, are behind them.

The Sedins took years to develop into top-tier NHLers – Henrik didn't hit a point-per-game until 2008-09. The next year, when they were 29, in the season where Henrik didn't have his brother for 19 games, he established himself as one of the very best, winning the scoring title and Hart Memorial Trophy. Daniel won the scoring title the next year, and was an MVP award finalist – as the Canucks came within a single win of the Stanley Cup.

The decline in the Sedins' output has been marked.

Last season, Henrik slipped below the point-per-game mark, which puts him back to where he was when head coach Alain Vigneault arrived in 2006-07.

The Sedins are still, no question, cornerstones of the Canucks. Henrik has played in 593 consecutive games, going back nine years, the seventh-longest such streak in league history. This from a guy that uncouth, and sexist, detractors used to call one of the "Sedin sisters."

Last Monday, asked of what he was particularly proud, with the club record at hand, was overcoming the early days and naysayers.

"We wanted to go back to Sweden every morning we woke up," said Henrik, and instead he and his brother became "bigger players than a lot of people thought."

The Sedins miss Ryan Kesler, without doubt. Their effectiveness this year is surely hampered somewhat by the absence of the injured second-line centre who often takes tremendous defensive heat from opposing teams' first lines, allowing the Sedins an easier ride – and a better chance to score – against weaker players.

The time will come, in the not-extremely distant future, to ask what's next?

Henrik this week said the twins are "absolutely" interested to stay Vancouver after their current five-year, $30.5-million (U.S.) deals expire after the 2013-14 season.

Vigneault has, in his first years in Vancouver, seen the exit of Canucks icons. Naslund, whose production was spiralling lower, played his last of 12 seasons in Vancouver in Vigneault's second year. Trevor Linden retired after the same season.

"Sometimes, I've had to make some tough calls on that since I've been here," Vigneault said after practice Monday, taking a deep breath before answering. "There's a point where players still think they're the players they were five, six years prior, and, you know, they're not."

As for the twins: "Every player is different. If you look at Hank and Danny, I mean, they take care of themselves so well, I wouldn't put a time limit on it."

Vigneault knows, at the end, it's not points the twins are counting. One trophy remains out of grasp. 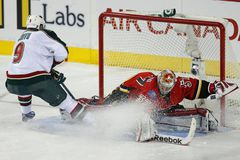 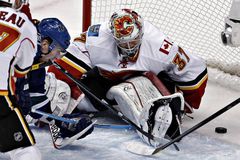 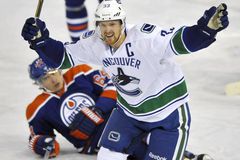