Just in case anyone was wondering if the Vancouver Canucks had forgotten how last season ended, the answer came Wednesday night – and it was a resounding no.

The Canucks returned to the scene of their first-round playoff exit – the Scotiabank Saddledome, where Micheal Ferland practically ran them out of the rink last spring – and sent a strong early message; that there'll be more of a push back this year when the divisional rivals meet.

Canucks' coach Willie Desjardins started the game with a line that isn't a regular line – Bo Horvat between tough guys Derek Dorsett and Brandon Prust – and his Flames' counter-part Bob Hartley took the bait, sending out Ferland to line up opposite Dorsett.  The two were jawing at each other before puck drop, Dorsett delivering a couple of love taps with his stick to Ferland's shin pads.

Predictably, the gloves were off before two seconds had elapsed. Ferland won the fight, but the Canucks ultimately won the war, overcoming a few shaky minutes early to dominate possession and defeat the Flames 5-1 in the NHL season opener for both teams.

There was more than the usual amount of hoopla associated with the opener. The NHL's deputy commissioner Bill Daly was in town to attend a league sponsored fan rally at Fort Calgary, intended to heighten the fever and fervour building around the young, up-and-coming Flames team.

Fitz & The Tantrums were the musical guests, but four hours later, it was Canucks' goaltender Ryan Miller who'd given the Flames fits and just about everybody on the Calgary side was trying hard not to throw a tantrum, after such a lackluster performance.

"Just way too many mistakes and chances for them offensively - we have no chance to be successful if we play like that," assessed Flames' captain Mark Giordano. "That's not our team out there. That was a tough game for us, a really bad start to the season, but it's one game and we've got to move on."

The Flames had won just 12 of 43 home openers in franchise history; this was their sixth consecutive opening-night loss; including two in a row now to the Canucks.

Nine of the players who were in the Canucks' line-up a year ago weren't there Wednesday night, Vancouver immersing itself in a massive on-the-fly rebuild. Rookies Ben Hutton and Jared McCann made their NHL debuts, while Prust, Brandon Sutter, Adam Cracknell and Matt Bartkowski were playing their first regular-season games in Canucks' uniforms.

Prust managed to get into a fight – with Brandon Bollig – in the first 10 minutes; Hutton set up the opening goal by Jannik Hansen with a nifty stretch pass and Sutter showed good eye-to-hand co-ordination to bat a puck out of mid-air to give Vancouver a 2-0 first-period lead.

Sutter, acquired in the off-season from the Pittsburgh Penguins, is a natural centre currently playing the wing with the Sedin twins, Henrik and Daniel, but he's occasionally taking the face-offs when that trio is on the ice, and it looks as if the trio has some possibilities. The line combined for six points and each of the three scored once.

There have been lots of players who've ridden shotgun with the Sedins over the years and it usually enhances their offensive games. Sutter looks like the latest who'll get a chance to shine with the ageless twins.

"Hank and Danny are pretty talented players," said Sutter. "If you give them the puck in the offensive zone, they make things happen. I thought we did a good job of hanging on to it; and having that possession down there. We didn't score some of the prettiest goals, but we went to the net and got a few. Overall, I thought we played well."

Daniel Sedin's goal, with five seconds to go in the second period, proved decisive, with Calgary unable to complete the sort of 11th-hour comeback that was a regular feature during last year's unexpected playoff berth. Alex Burrows received credit for the fourth Vancouver goal, which was deflected by Calgary defenceman Dennis Wideman passed his own goaltender, Karri Ramo, who received the start and had just a so-so outing.

Sutter, son of former Flames coach Brent Sutter, spent part of his youth growing up in Calgary and thus is aware of the rivalry that exists between the Flames and Canucks, one that was fuelled by last season's playoff battle.

"The rivalry's always fun to play in," said Sutter. "It's always a battle. They're always tough games. Obviously, these two teams played each other in the playoffs last year. Anytime you do that, playoffs have a way of changing the mindset on the ice when you're playing a team – and we definitely felt that tonight."

Theoretically, Calgary's youth movement is a little further along than Vancouver's, and features last year's Calder Trophy finalist Johnny Gaudreau plus Calder Trophy candidate Sam Bennett. Along with defenceman Brett Kulak, Bennett was playing just his second NHL regular-season game, after both made their debuts in Game 82 a year ago.

Calgary's only goal came from its top line, when Jiri Hudler converted a feed from Gaudreau 3:39 into the second period to draw the Flames to within a goal. Hudler led the NHL in even-strength scoring last season; and he remains their most dangerous offensive weapon.

Most Las Vegas odds makers like the Flames' chances of making the playoffs a lot more than they like Vancouver's, but opening night has a way of dispensing with exhibition-season narratives – and last night was no exception.

"The Canucks were much better than us," said Hartley. "I thought we had a great start, the first 10 minutes we were skating well, but after that, the game just got away from us. We got what we deserved. They kicked out butts."

Winning one regular-season game after losing a playoff series last spring hardly squares the scales, but it was a step in the right direction, the Canucks sending a physical message that was both evident and decisive.

The Vancouver Canucks are clearly Linden’s team now
May 15, 2018 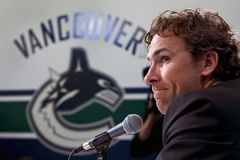 Canucks confident despite immense improvements from division rivals
May 15, 2018 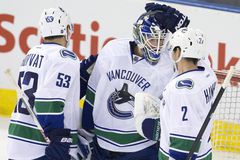 Leafs claim Frank Corrado off waivers from Canucks
May 15, 2018 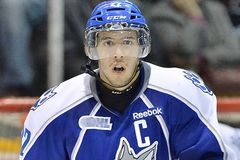