This is more than a blip.

For more than five weeks now, and more than 20 per cent of a full season, the Toronto Maple Leafs have been winning a surprising number of games. And when they're losing, they're in the game.

After beating New Jersey in a shootout on Tuesday, the Leafs record since the start of November is an competent 9-6-3 – a 96-point pace over a full season.

Blowouts have been extremely rare, with only last week's disaster in Winnipeg standing out as a lopsided loss.

Sure, the Leafs have been getting breaks that didn't go their way in October – like P.A. Parenteau's bizarre bouncing puck that led to the first goal against the Devils.

But they've also earned many of their breaks. Over the past seven games, for example, Toronto has been a 51.6-per-cent possession team, which is among the NHL's top 10 and typically the sort of number worthy of a playoff team.

Coach Mike Babcock says he can see his players' confidence growing as they realize they can play with some of the league's better teams, such as Dallas, Nashville, Washington and St. Louis.

"Confidence and swagger," he said when asked where he believes the biggest improvements have come over the first 28 games.

"Just feeling good about themselves … [It's] a belief system. We've got a lot of guys feeling better about who they are than they were at the start. That might be the biggest change."

"We see the results we've been getting when we play the way the coaches want us to," the team's leading scorer, James van Riemsdyk, explained.

When a lower-ranked team goes on a little run like this in the NHL, people wonder if it's sustainable.

In past years, the Leafs have had terrific starts, but then – in the parlance of former general manager Brian Burke – the 18-wheeler would go off a cliff, taking the team's record into the league basement with a huge string of losses.

That doesn't appear to be what's coming for Babcock's Leafs.

They haven't been getting points in two-thirds of their games because of outlandish percentages – in fact, their shooting percentage has been bottom five in the league.

But according to analytics site war-on-ice.com, Toronto's overall share of quality scoring chances is second-highest in the NHL over this 18-game stretch, at nearly 59 per cent (242 to 169).

Forwards such as Peter Holland (whom Babcock has shifted to the wing on a scoring line), Leo Komarov, van Riemsdyk and Nazem Kadri have been driving those numbers at even strength, posting some of the better ratios in the league.

Still, the margins for the Leafs are thin. If they don't get good goaltending – or a fortunate bounce like Parenteau's – shootout wins can turn into regulation losses pretty quickly.

Because the Leafs have been such a low-scoring team and yet so capable defensively, the majority of their games have been decided by one goal (with an empty-netter sometimes mixed in). The difference of late is they've been winning those tight matchups instead of losing them.

"Now we're starting to find a way to get points in those games," van Riemsdyk said.

What will likely be the single biggest factor in whether or not the Leafs continue to pick up wins will be goaltending. James Reimer and rookie Garret Sparks have combined for a 10-5-4 record and .933 save percentage in the games they've appeared in, numbers that rank with the league's elite netminders.

That certainly helps mitigate a lack of scoring. But when the team's week-long layoff ends next Tuesday, Sparks is expected to be back in the AHL, and Jonathan Bernier – currently on a conditioning stint with the Toronto Marlies – will rejoin the Leafs.

If Bernier regains his form after some strong outings in the minors, the Leafs can probably keep grinding out points and staying within reach of a wild-card playoff spot. If not – and if Reimer comes back to earth a bit – those 2-1 and 3-2 wins could start going the other way again.

It's become such a cliché that there's a fine line between winning and losing in the NHL, but that line has likely never been finer than this season. Aside from a few teams running away from the group at the top, most of the league is mired in murky mediocrity.

The difference between dead last and a playoff spot, in some divisions, is as little as four points, and a lot of that difference is simply standings noise.

Realistically, the Leafs probably nuked their playoff chances by getting only one win in October. But can they keep pushing like this – going 3-2-2 or thereabouts every seven games – for another couple months?

It sure looks like they can. And they certainly think so.

"All in all, we're a better team than we were," Babcock said. "But the one thing about the league is, the league gets better. So you have to keep getting better just to keep even." 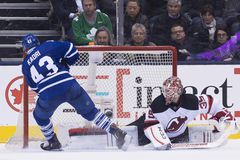 Lou Lamoriello’s Leafs looking more like his former Devils as they face off
December 8, 2015 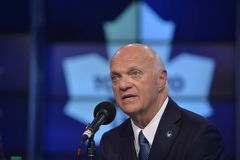 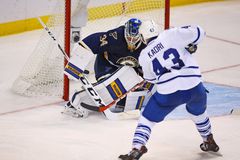 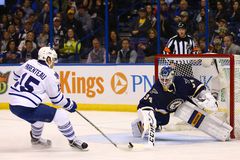 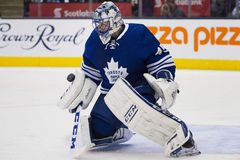