Imagine a newspaper world in which the three Los Angeles dailies all morph into tabloids for a fortnight, so instead of a sedate riff on the "Kings win" stories that appear in the Times, screaming New York Post headlines would abound. Then imagine the impact Kings defenceman Drew Doughty might have in the market that values talent, skill and great sound bites.

Not only is Doughty the early favourite to win the playoff MVP award, he is also the hands-down winner of the lesser known MVT award – most valuable talker. Doughty has been filling up notebooks since the Kings went on this roller coaster 2014 playoff run, in which they've survived three seven-game series and are now up 1-0 on the visiting New York Rangers in the best-of-seven Stanley Cup final.

Earlier on, as Doughty's impact began being felt, someone asked him one of those longer-look interviews that you get on a playoff off day – how has his game evolved since 2010, when he was an unexpected but valuable 20-year-old contributor to Canada's gold-medal Olympic victory. "I'm WAY better than I was in Vancouver," Doughty blurted out. Asked about Patrick Kane's four-point night in the last round, Doughty suggested the scoresheet flattered the Chicago Blackhawks star. Doughty will tell anyone who asks that he needs to be the best player on the ice every night out to give his team a chance to win.

Some players might say that and it would come out sounding like braggadocio. With Doughty, it just seems natural and matter of fact.

Among his teammates, he is known for Dewey-isms, garbled words and observations that get their meaning across, even if they sound as if they came out of Yogi Berra's mouth. Doughty, talking about his early meetings with Darryl Sutter, invented the perfect word to explain why he always aimed to please his coach – he didn't want to get on the wrong side of his "sarcasticness." Doughty can still be a Drew-fus; and captain Dustin Brown has been teasing his roommate Doughty for a long time now, and two years ago told the story of how Doughty asked him once, as the Kings' charter flight left the tarmac, which island they'd just flown over. Brown deadpanned: "Hawaii" and then checked to see if Doughty – still geographically challenged in his early days with the Kings – was buying it. Yes, he was. Eventually, Brown had to explain it was actually Catalina.

"The thing that makes Drew really hard to play against is his ability to get himself out of trouble," said Brown, who played against him in consecutive Olympics as a member of Team USA. "You think you have him in the corner or you have him where you want him and he escapes. His escapability with the puck is something you can't really teach. It's something he just has naturally."

Sometimes, Doughty just gets too wound up, and becomes too much of a risk taker. In the opener, he tried a high-risk toe-drag move in the Ranger zone that backfired and ended up in the Kings' net. Next period, unfazed, he was at it again – and this time, the move paid off in the tying goal, beautifully executed against King Henrik Lundqvist, which forced overtime and gave the Kings a chance to win.

"I think everyone is well aware of how capable a player [Doughty] is, and how he can control a game," Brown said. "It's just a matter of sometimes reeling that emotion in, so he can get focused again. Maybe the best example in this postseason is a penalty-shot call in Game 7 of the Anaheim series. Whether it was a good call or a bad call, he was upset about it. We just needed to calm him down. That's why we have Quickie [Jonathan Quick] to make a save now. Now, we've got to continue to play – and get him dialled back in.

"Just knowing him and rooming with him, there's a certain way of handling him. With me and Drew, it's give and take."

For years, the Kings' GM Dean Lombardi has compared Doughty's development to that of the Hall of Famer Ray Bourque. They are two players who, in their draft years, were identified as both supremely talented and clueless about conditioning. Doughty's nickname was Dough Boy, and Bourque was associated with too much doughnut consumption. Bourque eventually became a chiselled NHL specimen, and one of the great players of his era. But he didn't win the first of his five Norris trophies until he was 26.

Doughty is fitter than he was, but he can still get better in that area of the game, according to Kings coach Sutter.

"I think when you do all the analytics on athletes, he's a long ways from being as good as he's going to be just because of his age," Sutter said.

"You learn to manage your ice time better; you become a better shot selection guy; you become a better penalty killer. You learn the league better, you learn players on the other teams better, the nuances of star players. You learn how to handle your practice habits, nutrition, what you do on game days. All that stuff. As I say, there's a big difference between being 25 and 35."

Doughty actually just celebrated his 24th birthday back in December, just before the Kings went on a road trip through Montreal, Toronto and Ottawa, where Doughty completely lit it up. He has already won a Stanley Cup and two Olympic gold medals – and if the Kings polish off the Rangers, he is favoured to win the Conn Smythe Trophy, something defencemen rarely do. Only eight have ever received the trophy since it was first awarded in 1965 – Bobby Orr twice, along with Serge Savard, Larry Robinson, Al MacInnis, Brian Leetch, Scott Stevens, Nicklas Lidstrom and Scott Niedermayer. Only five times in the past 34 years did it go to a defenceman. If it happens, I know the perfect New York Post headline too. 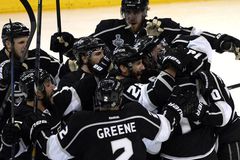 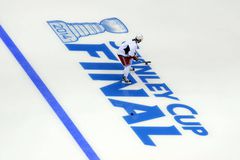 Kings advance to Stanley Cup final with Game 7 win over Blackhawks
June 1, 2014
Follow Eric Duhatschek on Twitter @eduhatschek
Report an error Editorial code of conduct
Due to technical reasons, we have temporarily removed commenting from our articles. We hope to have this fixed soon. Thank you for your patience. If you are looking to give feedback on our new site, please send it along to feedback@globeandmail.com. If you want to write a letter to the editor, please forward to letters@globeandmail.com.
Comments