Nearby Disneyland is advertised as the "Happiest Place on Earth." But for more than a decade, the Honda Center in Anaheim, Calif., has been a house of horrors for generations of Calgary Flames players, fans, managers, trainers, public-relations representatives, team services guys and anybody who happened to tag along for the trip to Southern California.

The Flames have lost 20 regular-season games in a row – 20! – against the Ducks in Anaheim, dating back to January of 2004. Even when the Ducks were a bad expansion team, or a middling postexpansion team, they always seemed to find a way to defeat visiting Calgary.

And even if the current edition of the Flames bears little responsibility for that lengthy stretch of futility, it is a focal point now that the two teams are meeting in the second round of the Stanley Cup playoffs. Even if they hadn't had Calgary's number for a long time, Anaheim would still be the favourite for a lot of reasons: The Ducks are deeper, stronger and more physical than the energetic young Flames; they have more playoff experience and more rest; and they generally look stronger on paper – though, thankfully for Calgary, the game is rarely won or lost there.

"To be honest with you, I don't even know why we're going there. We'll do our best."

The last two sentences brought gales of laughter from the assembled press corps because Hartley played the same underdog card in the previous series, against the Vancouver Canucks – fooling no one then either.

Other than confirming that former Ducks goalie Jonas Hiller will start in the playoff opener for Calgary and that defenceman Mark Giordano will not return any time soon from his biceps tendon surgery, Hartley spent most of his press conference heaping praise on the Ducks and playing up his own team's courage.

"All our players deserve tons of credit," he said. "The city is crazy red. Wherever you go, I have sunglasses and a fake mustache just to get in my car. The priest in my neighbourhood was wearing a Calgary Flames jersey before mass. My wife goes and spends all of our budget on candles in the church right now."

Internally, the Flames believe they have more than a hope and a prayer in this series, but a large part of winning will be containing Anaheim's size advantage up front. Despite – or perhaps because of – all the razzing he took from Winnipeg fans, the Ducks' Corey Perry had an exceptional first round, scoring seven points in four games; teammate Ryan Getzlaf was an effective contributor, too. According to Flames defenceman Dennis Wideman, Perry and Getzlaf pose a slightly different challenge than Vancouver's Sedin twins.

"The Sedins try to two-on-one you and beat you that way," Wideman said. "Perry and Getzlaf will play any way you want. If you want to play a skill game, they can play a skill game. If you want to try to go at them and be physical with them, they're not going to shy away from that, either. They're obviously going to be tough. They obviously had a great series last series. Hopefully, we can do a job and shut them down."

Anaheim won the Western Conference with 109 regular-season points – 12 more than Calgary – and then swept the Winnipeg Jets out of the playoffs in the opening round.

Anaheim ranked No. 1 with 12 regular-season comebacks and did it three more times in the playoffs, becoming the first team in playoff history to win three games in a row when trailing after two periods. Calgary was No. 3 with 10 third-period comebacks and overcame a three-goal deficit versus Vancouver on Saturday in the series-clinching game.

The Flames did manage one victory on Anaheim's ice during the 2006 playoffs, but lost a series in which they were favoured.

Overall, Anaheim had the sixth-best home record in the NHL this year (26-12-3), but Calgary was decent on the road (16th overall at 22-17-3). The Flames proved at times that they can win away from the Scotiabank Saddledome – just not against the Ducks, where Anaheim won this year's meetings 3-2 and 6-3.

Do patterns emerge? Can one team have another's number? Or is Calgary's decade of futility in Anaheim irrelevant now that the playoffs are in the second round?

"Hopefully," Flames defenceman Deryk Engelland said. "Obviously, it's playoffs. It's a different time of year, a different game, and we're starting with a clean slate. It's zero-zero right now – and we've got to go in with that mindset." 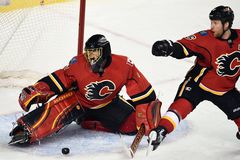 Flames recover from three-goal deficit to beat Canucks, advance to second round
April 25, 2015 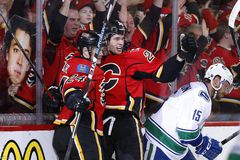 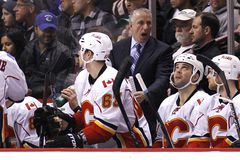