A judge's partial ruling in the Goldwater Institute's attempt to block the Phoenix Coyotes' arena lease raised more questions than answers, which is par for the course in this long-running saga.

The biggest question is whether or not the sale of the Coyotes from the NHL to former San Jose Sharks president Greg Jamison will be held up or even scuttled now that it's possible taxpayers in suburban Glendale will be asked to approve the arena lease through a referendum in November. When NHL deputy commissioner Bill Daly, the league's point man on this file, could not be reached for comment we turned to Glendale city councillor Phil Lieberman.

"Nobody knows," Lieberman said Wednesday. "There are no answers yet."

The problem is that Jamison needs the arena lease, which will pay him and his partners $324-million (all currency U.S.) over 20 years to operate Jobing.com Arena, to complete his financing. Jamison, who freely admits he does not have the personal wealth to pay the NHL $170-million for the Coyotes by himself, has not revealed the identity of his partners.

Indeed, there is no shortage of people in the NHL and banking communities who believe Jamison needs the lease to put together the lion's share of this purchase. Convincing an investor to put money in an NHL team that routinely loses $30-million a year is much easier when you can wave a lease that gives you $94-million in "management fees" over the first five years. Ditto with asking a bank to cough up a big loan.

Lieberman had a private meeting with Jamison, Daly and NHL commissioner Gary Bettman two weeks ago. He came away convinced Jamison needs to use the lease to put the sale together rather than it is the final piece in the Coyotes' puzzle.

But Goldwater complicated things, as expected, by going to court to seek an injunction to overturn the lease. The public watchdog group argued that Glendale council could not put the arena lease into effect immediately by saying it was an emergency measure because only four of the seven councillors voted to approve it and five votes are needed in those circumstances. Goldwater also argued the contract to manage the arena has to be put up for bids.

Maricopa County Superior Court Judge Dean Fink reserved a decision on invalidating the lease but he did throw a spanner into the plans of Glendale and the NHL. He ordered Glendale to rewrite the lease to show it is not an emergency measure, which means opponents can try to get a referendum for it.

The two Glendale taxpayers who fronted Goldwater's lawsuit now have until July 8, which is 30 days after council approved the lease, to get 1,862 signatures on a petition. If they do not, the lease with Jamison goes into effect. If they do, the question of approving the lease can be added to the ballots for November's municipal election.

Now Jamison and the NHL have to deal with the possibility the foundation of the Coyotes purchase could crack.

"I'm sure a bank looking at [Jamison] and Goldwater would say, 'Why do I want to get involved in this?' " Lieberman said.

During his meeting with Jamison, Bettman and Daly, Lieberman asked Jamison to identify his partners. He didn't get an answer, which is why he thinks the financing for the Coyotes deal has a long way to go. Lieberman also said Bettman admitted at one point the league is in a tough spot.

Bettman can afford to wait until July 8 to see if the lease will go to a referendum even though the 2012-13 schedule will be released Thursday. But if Jamison has to put his bid on hold until a lease vote in November, the NHL will have to make a hard decision.

The governors may not be willing to pour more money down the Coyotes sinkhole on the chance Jamison can pay them back if Glendale taxpayers approve the lease. Not with the possibility of carrying yet another team – the New Jersey Devils – hanging over them.

Moving a team in early July is a huge, unappetizing task. But it can be done. 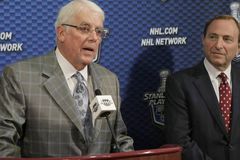 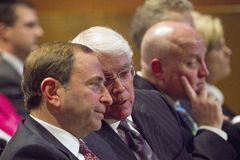