Once Leaf Nation got over the shock of Wednesday's stunning front-office shuffle, there was really one question left on everybody's mind. Did Brian Burke's dismissal make it more or less likely that the Toronto Maple Leafs would move forward on a possible deal with the Vancouver Canucks for goaltender Roberto Luongo?

Now, Luongo ultimately has the last word on a final destination because he has a no-trade clause in his contract and the Florida Panthers appear to be his team of choice, for personal and professional reasons.

But Canucks' general manager Mike Gillis also has a responsibility to make the best possible deal that he can for his organization – and you'd have to think that right now, the Maple Leafs could offer the sweetest combination of players, especially to remedy the issue that Vancouver has at centre, with the injured Ryan Kesler still on the shelf.

On Tuesday, Gillis was asked if Burke's firing would affect Luongo trade talks one way or the othe and said, " Not in my mind."

Gillis also said the window on a Luongo trade will not open until the weekend after the players ratify the new deal. "Then it begins," he said.

You always had the sense that Burke resisted a trade for Luongo for the same reasons that he didn't move to improve his goaltending last year at the NHL trading deadline, when it was eminently clear that netminding was the weakest link on a team whose promising start evaporated during a second-half collapse. There were veteran goaltending options available last March, too, that Burke didn't act upon, moves that might have got the Leafs into the playoffs had he gone in that direction soon enough.

Burke can be stubborn that way. He held onto coach Ron Wilson out of loyalty, long after it became clear that Wilson's shelf life with the Leafs had expired.

That was Burke's way. Even if everybody around him was saying one thing, he clung to his beliefs. He is a man of courage and conviction, even if logic sometimes suggested a different path was in order.

In his mind, the Leafs' goaltending would eventually come around – although you'd have to think that François Allaire's departure as the goalie coach indicated that Burke did recognize that something needed to be done there.

So now, here is Dave Nonis, the new general manager, who has that well-documented history with Luongo. As Burke's successor in Vancouver, Nonis's best move was acquiring Luongo from the Panthers for a package of players – Todd Bertuzzi, Bryan Allen and Alex Auld – that didn't do a thing to help Florida. But in Vancouver, Luongo's steadiness in goal helped the Canucks evolve into a bonafide Stanley Cup contender – and got them all the way to the seventh game of the Stanley Cup final two years ago. They have had five 100-point seasons in the past six years; and won five division crowns along the way, making them by far the most successful Canadian franchise in that time span – and Luongo had a lot to do with their success.

In the end, Burke lost his job primarily because the new ownership at Maple Leafs Sports and Entertainment wanted a new calmer, more corporate, face for the franchise.

Tom Anselmi, the chief operating officer, said as much, noting the decision to remove Burke was "more about tone and the voice of leadership than changing gears and going in a different direction."

Nonis made that point, too – that the Leafs were not prepared to go back to the starting line, even with the change in the manager's chair.

"To turn around and gut the franchise now would set it back a long way," Nonis said, "and it is not something anybody has any interest in doing."

No, but they are interested in wheeling and dealing as soon the new labour pact is ratified and teams get the green light from the NHL to start making trades.

Nonis made one other interesting observation about the state of the team – how the Leafs had some "good building blocks, but some of those building blocks are aren't ready to play right away. We have to buy ourselves some time until the younger players come along."

Nothing buys a team time like the presence of a quality, experienced No. 1 goaltender. Nothing makes a team more competitive in the short term than solidifying its goaltending. You'd have to think that whatever qualms Burke may have had about moving forward on a Luongo trade, Nonis wouldn't share the same concerns. And if the Leafs land Luongo before the start of the season, that alone would change the on-ice dynamic more than any front-office shuffle possibly could. 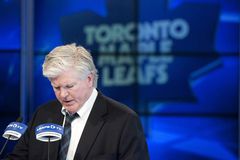 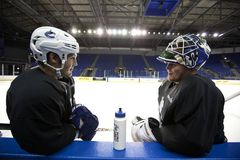