On one level, the news that Teemu Selanne was unhappy with how he was deployed by Anaheim Ducks coach Bruce Boudreau last season is hardly an earth-shattering development. For almost two years now, Selanne and Boudreau have spoken openly about their conflicting views of how the Ducks could best maximize Selanne's contributions to their Stanley Cup aspirations at his advancing age.

Boudreau firmly believed that he had to limit Selanne's ice time to a little over 14 minutes per night – and sit him out whenever the Ducks played back-to-back games – so that there would be something left in those 43-year-old legs come playoff time. Back in the lockout-shortened 2012-13 season, Selanne suggested in a Globe and Mail interview that he couldn't play to his full potential if his role were limited to the minutes of a fringe player.

But both Boudreau and Selanne repeatedly talked about the ice-time issue in such calm, measured tones that it never became the firestorm it could have been. They just agreed to disagree, as gentlemen can.

All that changed Thursday, however, when Selanne upped the temperature considerably with the release of his biography in Finland.

Ghosted by Finnish journalist Ari Mennader, and not scheduled to be published in North America until 2015, Selanne said that he might have considered returning to the Ducks this year for what would have been his 22nd NHL season, if someone other than Boudreau had been behind the bench.

He also asserted how devastating it was to him personally to be a healthy scratch for the fourth game of the Ducks' opening-round series against the Dallas Stars; and how Boudreau had promised him a more consistent role on the Ducks' power play going into the season, but rarely played him on the first unit with Ryan Getzlaf, Corey Perry, Cam Fowler and the rest.

Selanne also saved a few harsh words for former Ducks' coach Randy Carlyle, a former teammate of his with the Winnipeg Jets back at the start of his career. Selanne argued that the Ducks' teams in the Carlyle era collectively ran out of steam as the season progressed because of his overly challenging training camps, and too many bag skates along the way. Intriguingly, he also revealed that he briefly considered signing with both the Los Angeles Kings and the Jets last fall rather than play his final season under Boudreau.

It sounds as if it's an interesting memoir, the highlights of which were splashed across Twitter Thursday morning by a number of Finnish journalists, including Juha Hiitela. Selanne sounded particularly upset with how Boudreau managed his ice time after returning from the Olympics, where he played a starring role on Finland's bronze-medal team.

It was hard to argue with Selanne's desire to play in a record sixth Olympics, especially since it was the first time he would be the team's captain. That job generally fell to Saku Koivu, his Ducks' teammate at the end, who – given the same opportunity to have one last Olympic swan song – elected not to play, so he could rest up for the stretch drive.

Had Selanne done something similar, would the Ducks have been more inclined to increase his role? Hard to say. There were a few games, right after Sochi, where Boudreau put Selanne up on the top line with Getzlaf and Perry and there seemed to be some chemistry there. But ultimately, that spot became a mix-and-match option for any number of Ducks' forwards, from Patrick Maroon and Matt Beleskey, to Devante Smith-Pelly and even Nick Bonino. All had their moments too, which is what you might expect for anyone playing up with two such talented linemates.

Most tellingly, perhaps, is what Selanne acknowledged doing after the first period of Game 7 in the Ducks' quarter-final series against the Los Angeles, where they fell behind 3-0 in the game. According to the book, Selanne texted his wife and some friends from the dressing room, saying: "(expletive) joke."

Post-game, after the Ducks were eliminated, Selanne gave a wonderful reflection on his career, and spoke until the last question had been asked. But the subject of that text – or his bitterness over how it ended – never came up.

Last year, right around this time, Selanne became a bit of YouTube sensation after posting a funny video, in which he announced his decision to return for another year. In the video, Selanne was struggling on a golf course, shanking shot after shot, and finally – in frustration – heaved his clubs into a nearby pond. At that point, he waded in, retrieved his clubs, pulled out his cellphone and called GM Bob Murray to say: "I'm coming back – but this is it."

After last year's second-round loss, the Ducks were clearly in the market for changes – and among other moves, made a deal to acquire Ryan Kesler from the Vancouver Canucks to bolster their centre-ice corps. But the Ducks also have a strong farm system and you always had the sense that they wanted to make room in their lineup for some of their young forwards – Smith-Pelly, Emerson Etem – and, if Selanne had opted to play another year, the offer might have been politely declined. As much as they valued his contributions over a career in which Selanne became the single most identifiable player in franchise history, they were ready to move on - and thought he should too.

You're left to wonder, how strained might the Selanne jersey retirement ceremony be next January, when the Jets visit Anaheim and Boudreau is still coaching the Ducks? Presumably, there will be time to smooth over the waters; and if necessary, explain that some things might have been lost in translation. These controversies do tend to blow over in time, but the timing couldn't have been ideal from an Anaheim point of view – needing to address the issue of an unhappy franchise icon on the day training camp for their 2014-15 season opened.

That's when you want the focus to be on the promise of tomorrow, not on the failings of yesterday. 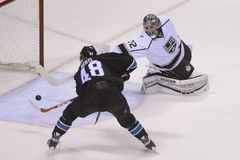 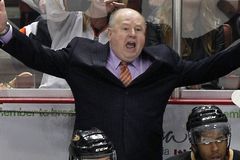 Teemu Selanne to become first Ducks player to have his number retired
August 1, 2014 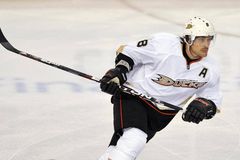