Throughout this wild Game 4 of the Stanley Cup final, overtime seemed a given.

No matter what the Chicago Blackhawks did, the Boston Bruins – "Unstoppable," according to the TD Bank Garden scoreboard – came clawing back.

But, in the end, not far enough, as the Blackhawks took the game 6-5 when defenceman Brent Seabrook scored on a long slapshot 9:51 into the first extra period.

"I was just trying to get it by the first guy," said Seabrook as the Bruins set up a wall of defenders in front of Tuukka Rask.

The first two games of the best-of-seven final had reached overtime, and before the puck dropped the NHL released statistics showing that 26 playoff games, now 27, have gone into extra time – one short of the record set back in 1993 when Patrick Roy was winking at fate and his Montreal Canadiens were winning their last Cup.

Given the very late date, there was even some concern Game 4 might not be decided until the Summer Solstice – due here at 1:04 a.m. Friday – at which time the players might as well be trying to balance eggs upright as try and score on Rask (three shutouts, 1.64 goals-against average and a save percentage of .946) or Chicago Blackhawks' Corey Crawford (1.74, .936).

But that was then. A goaltending duel this most assuredly was not. What it was was a wild, unpredictable, entertaining and at times bizarre game in which the Blackhawks eventually emerged victorious.

"They were better than we were," Boston head coach Claude Julien candidly admitted.

"There was a lot of our game that was just average – and average isn't good enough at this time of year."

The series now returns to Chicago for Game 5 on Saturday, with the best-of-seven final now tied at two games apiece.

"We have to steal a game here," Chicago defenceman Johnny Oduya had said before the match.

If Oduya had a plan, it was a strange one. With his team's power play a disaster these playoffs but their penalty kill usually excellent, Oduya took an interference penalty early in the opening period to give the Bruins, who have had their own difficulties, a power play.

When Boston forward Tyler Seguin, who has had a dismal playoffs, mishandled the puck in the Chicago end, Brandan Saad and Michal Handzus broke up the ice shorthanded on a two-and-one, Saad slipped the puck to Handzus and the Swedish centre threw it high behind Rask for a 1-0 Chicago lead.

Perhaps the bad ice caused Seguin to slip, because it appeared to be a factor later when the Bruins were handed a gift when, on another power play late in the opening period, Saad lost his footing trying to carry the puck out of his own end and Rich Peverley grabbed the loose puck and fired a hard wrist shot past Crawford.

The Bruins had gone into the game fearing over-confidence.

"There's no gimmees," said Milan Lucic. This, of course, was before Saad staggered to the ice and handed Peverley a gimmee.

The Blackhawks could ill afford to be so generous. Going down three games to one would almost certainly prove disastrous.

Marian Hossa, the superb Chicago forward who had missed the last game with a mysterious "upper" body injury, returned to the lineup. Quenneville also reunited the line of Jonathan Toews, Patrick Kane and Bryan Bickell that had been so dominant earlier in the playoffs.

Early in the second period, Toews scored on a tip in for only the Chicago captain's second goal of the playoffs.

"They're ugly goals. We con't care. We'll find a way and just keep going," Toews said after the game.

"We went the well," Quenneville said after the win. The result, he joked, made it seem like the coach "knows what he's doing."

The Hawks went ahead 3-1 when Kane was able to slip a backhand shot behind Rask on a goalmouth scramble. It was Kane's seventh goal of the playoffs, while Bickell, the third member of the reconstituted trio, picked up an assist.

Yet every time it appeared the Blackhawks had taken control, the Bruins came back to threaten overtime.

The Bruins drew back within one goal when Lucic tipped a Zdeno Chara shot into Crawford and then was able to backhand the rebound past the kneeling Chicago goaltender.

"We opened up," said Julien. "And we scored goals – but we also gave them goals."

Chicago again took a two goal lead only 49 seconds later when, on a two-on-one, Michael Frolik dished the puck off to Marcus Kruger, Kruger shot, Rask saved, and then Kruger, flat on his stomach to the side of the net, was able to reach back, grab the loose puck and curl it into the Boston net.

But again the Bruins fought back when they got another power play late in the second. Patrice Bergeron scored off a bizarre play where a Chara point drive bounced off the glass back of Crawford's net, off the top of the net and fell at Bergeron's feet as he stood at the mouth of the crease.

The sellout crowd of 17,765 lustily cheered their heroes off the ice, convinced the full comeback was only a matter of time.

And in a way it was. The third period was barely underway when Jaromir Jagr magically worked the corner boards before feeding Bergeron for his ninth of the playoffs, a wrist shot that Crawford should have had.

And then things got very strange. Chicago took a penalty, giving Boston another power play, but Boston took two quick penalties themselves, briefly handing Chicago a five-on-three. The Bruins survived the first man advantage but could not survive the second, as Patrick Sharp scored on his own rebound.

But, of course, once again Boston came roaring back, Johnny Boychuk hammering a hard slap shot past a rather rattled Crawford.

Close to "Unstoppable," but not quite.

This might well be a series played in summer – but it is also turning into one for the ages. 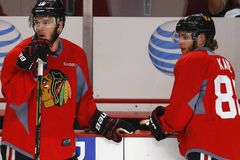 By the numbers: The Bruins unbelievable defensive dominance
June 18, 2013 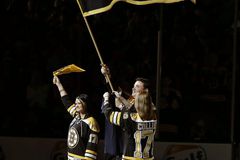 Blackhawks coach not saying where or when Hossa was hurt
June 19, 2013 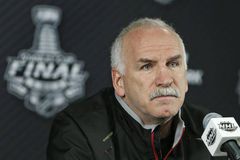 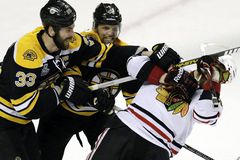