The Vegas Golden Knights are the best expansion team to hit the NHL in 50 years.

The reasons are numerous, but of course it all comes down to money.

First, the NHL made more and better players available in the expansion draft than in the past and, there was only one team drafting. General manager George McPhee, assistant GM Kelly McCrimmon and their team of scouts did a masterful job of spending the entire season before last June's expansion draft getting to know every player in the NHL.

The second reason is head coach Gerard Gallant. He will easily win this season's coach-of-the-year award (he was the runaway winner of the unofficial half-season voting by the Professional Hockey Writers Association and the fans) by getting his players to buy into his fast, aggressive forechecking game and put the team above all else.

But the biggest reason the Golden Knights went into this weekend's annual all-star break with the second-best record in the NHL (32-12-4) and in first place in the Western Conference is the salary cap. The $75-million (U.S.) payroll limit meant a lot of NHL teams had to make difficult choices about which players to protect and created far more options for McPhee and company, options they were only too happy to exploit. They also had a team owner in Bill Foley who was happy to spend the money necessary to take full advantage of the cap.

It was the biggest advantage for an NHL expansion team since 1967 when six teams were added at once, doubling the size of the league, and placed in the same division. That guaranteed one of them would be in the Stanley Cup final (the St. Louis Blues made it three years in a row, losing each time) but all six were able to harvest a player market that was overflowing simply because the NHL was limited to six teams for decades.

"Yes, that's a fair comment," McPhee said of the salary cap. "The rules were better for us than any team in the past.

"The salary cap made it clear there were teams that had cap stress and teams that had exposure stress [to the expansion draft] and some teams had both. If we were willing to take on certain contracts [from other teams], which management was willing to do, we could get better players or better draft picks or both [in trades]."

Roll those reasons together and it is why the Golden Knights came out of the expansion draft and the trades associated with it with all-star-calibre players such as goaltender Marc-André Fleury, fresh off winning a second consecutive Stanley Cup with the Pittsburgh Penguins, forwards James Neal (Nashville Predators), Jonathan Marchessault (Florida Panthers) and centre William Karlsson (Columbus Blue Jackets).

These were not 35-year-old washed-up stars, the staple of many previous expansion drafts, but players in the prime or early stages of their careers. Then again, considering what the NHL charged Foley as an expansion fee, there should have been some top players available."It was different and it should have been," said Sportsnet broadcaster Doug MacLean, who took part in the previous expansion draft in 2000 as the president and GM of the Blue Jackets. "In Columbus, we paid $80-million for our franchise. [The Golden Knights] paid $500-million.

"Teams were dramatically uptight in this expansion draft because they were in trouble [with the salary cap]. It was a tremendous advantage to [McPhee] in negotiations. Let's not kid ourselves, Columbus did not want to lose Karlsson. It was Josh Anderson or him. All of a sudden it was a big, big decision for Columbus."

The trade that brought Karlsson, who is the Knights' No. 1 centre and tied for second in the NHL scoring race with 27 goals, is the best illustration of how McPhee leveraged the cap to get a good player.

In the expansion draft, the 30 existing teams were allowed to protect one goaltender, three defencemen and seven forwards or two goaltenders and eight skaters, regardless of position. First- and second-year professional players were exempt from the draft, which protected teams' best prospects. But any player with a no-move clause in his contract had to be protected, which cramped some teams.

As the draft approached, the choice of who to expose, for Columbus president John Davidson and GM Jarmo Kekalainen, came down to Karlsson, fellow forward Anderson or backup goaltender Joonas Korpisalo. Karlsson, 25, was playing on the Jackets' third line. Anderson, 23, had 17 goals for Columbus in 2016-17 to Karlsson's six and was considered a potential first-line power forward. Korpisalo, 23, was projected to be a No. 1 goaltender.

Kekalainen knew Karlsson had some up-side as an offensive player but did not see him as a No. 1 centre. Besides, teenager Pierre-Luc Dubois, the third overall entry-draft pick in 2016, was set to make the Blue Jackets this season and was considered the better bet as a top-line centre.

So in February, 2017, McPhee made what is thought to be his first trade. In exchange for taking Karlsson in the expansion draft instead of Anderson or Korpisalo, the Golden Knights received a first-round pick in the 2017 entry draft (24th over all), a third-round pick in 2019 and injured forward David Clarkson.

Clarkson was the key to the trade, as he carries a $5.25-million cap hit through 2019-20, thanks to a contract he signed while he was with the Toronto Maple Leafs. But the chronically injured winger is unlikely to play again and his contract was a millstone around the Blue Jackets' neck when it came to the salary cap.

McPhee had no problem taking Clarkson because a first-year expansion team also had the advantage of not having any of those expensive mistakes in player contracts. He would also have fewer star players, so bumping against the $75-million cap was not a problem. All McPhee had to do was hit the $55.4-million cap minimum, which was easy enough with the help of Clarkson.

And so it went. The Penguins decided their future in goal lay with 23-year-old Matt Murray, so Fleury was made available in the expansion draft. Other deals similar to the Columbus one reaped defenceman Shea Theodore, a first-round draft pick, from the Anaheim Ducks, and forward Reilly Smith, who had an expensive contract, from the Florida Panthers.

No other NHL team contributed more to the Knights than the Panthers. McPhee also took Marchessault from Florida in the expansion draft because the Panthers elected to protect their crop of young defencemen and left the 30-goal scorer exposed. Also coming over was Gallant, who was fired by the Panthers late in the 2015-16 season.

By the end of the expansion draft, thanks to his dealing, McPhee not only had a promising roster of players, he had three first-round picks in the 2017 entry draft and a bucketful of picks in the next two drafts as well.

Now he has the best team in the Western Conference and one that is a hit with the local fans. After 24 home games, the Knights are averaging 17,920 fans a game, which is 103.2-per-cent capacity at T-Mobile Arena.

McPhee has no problem admitting there was a little luck involved. While he, like Kekalainen, thought there was some offensive up-side to Karlsson, who just needed more ice time to show it, he never thought he landed the anchor to his top line.

But the selection was rooted in preparation. Once he was hired in the summer of 2016, McPhee picked the brains of previous expansion GMs such as Doug Risebrough, who was the GM of the Minnesota Wild and went against MacLean in the 2000 draft, and Bob Clarke, the first GM of the Panthers.

When Karlsson became available, McPhee remembered something Risebrough told him.

"Dougie Risebrough emphasized to be on the lookout for unknown surprises," McPhee said. "Don't just claim players with the big name that people would recognize. Focus on guys you think might have an up-side.

"Nobody knows who they are right now, but they might be real good players in a year or two. We took a lot of younger guys we believed might have some up-side and a number of them played very well."

Risebrough and Clarke also told McPhee to make sure his players were fast enough to play in today's NHL and make sure they are willing to work hard. So a big part of the research by McPhee and McCrimmon into all those players was exploring their personalities as well.

"We were looking for the most talented people we could get but they had to be hard-working because you can accomplish things with a team of workers," McPhee said. "We wanted low-ego people who were ready to work."

That is what he was looking for in a head coach as well. McPhee also wanted someone with experience as an NHL player and a coach, so he would not be intimidated by the league, a good communicator, a tactician and someone who inspired great loyalty in his players.

"[Gallant] embodies all those things," McPhee said. "We wanted someone with the sense of calm a first-year team needs. He's a very low-ego guy. We don't have a face for our franchise. It's all about the logo, the team. So far, it's working."

MacLean says the Knights are simply "better than a lot of teams. They're a fast, fast team." While the debate rages about whether the Knights can sustain their initial success through the playoffs, MacLean thinks the challenge for the team will come "next year, when guys have new deals. Is there an excitement dropoff? What are the expectations next year? That will be interesting."

To which McPhee says, whoa, wait a minute, we really haven't done anything yet. But he admits the team is well beyond the goal he set before the season.

"We wanted a competitive team our fans would enjoy watching," he said. "We wanted to give our market a chance."

How the Vegas Golden Knights’ bunch of bad ideas became a miracle in the desert
January 1, 2018 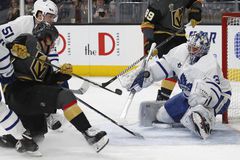 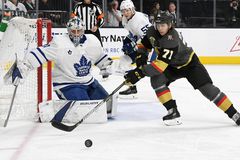 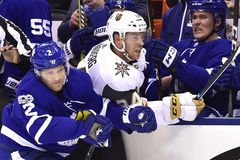