When he was still the head coach of the Detroit Red Wings, Mike Babcock often watched Wings prospect Dylan Larkin play at the University of Michigan. He'd always come away impressed by Larkin and another player: then-Florida Panthers prospect Zach Hyman.

"I just saw him get the puck to Larkin all the time," Babcock said. "That's all I saw. He just got the puck, got it to Larkin and they scored."

Hyman has found a similar role in his first full season with the Toronto Maple Leafs, the Robin to Auston Matthews's Batman. The 24-year-old now gets the puck for Matthews, whose 15 goals lead the Leafs and trail only Winnipeg's Patrik Laine among NHL rookies.

Babcock prefers muckers such as Hyman around talents such as Matthews. While in Detroit, he learned from Red Wings legends Henrik Zetterberg and Pavel Datsyuk that the skilled types preferred those who got the puck back for them to those who kept it.

"They don't want three guys on a line that want the puck," Babcock said. "They want guys that get 'em the puck and then get open."

Hyman believes his most translatable NHL asset is his strength on the puck, how he's able to track it down on the fore-check and get it back for his side. The next move is dishing it as quickly as possible to playmakers such as Larkin and Matthews.

In a 3-2 loss to Anaheim on Monday night, it was Hyman picking the puck free from Ryan Getzlaf in the offensive zone that led to Matthews's ninth goal in the past 12 games.

"Some guys are pure passers and so they need more shooters with them, but Auston likes to shoot the puck, as you can see, and he likes people that can get it to him," Babcock said.

Hyman picked up his 11th point of the year on the goal, all coming at even strength. He's been Matthews's one constant linemate all season, totalling more than 362 minutes alongside the Arizona native in five-on-five situations.

A Toronto-area native himself, Hyman has quickly earned a big fan in Babcock for his tenaciousness and willingness to do the grunt work around Matthews.

Babcock describes Hyman as a "dominant fore-checker" and "a dominant cycle player." The head coach has also employed him more than any other Leafs forward on the penalty kill. Hyman ranks third among NHL forwards in average shorthanded ice time (2 minutes 48 seconds), including almost four minutes against the Ducks.

He wasn't on the ice for Anaheim's game-winning power-play goal because he was stuck in the box for a needless roughing penalty that set the stage for Toronto's 13th one-goal loss of the season.

Hyman was a nuisance when he was on the ice killing penalties against the Ducks, particularly in a first period that saw the Leafs shorthanded three times. Picking the puck away from Sami Vatanen at one point, Hyman raced in alone on John Gibson, but his deke attempt was stopped by the goalie's right toe.

Babcock said Hyman has recently begun making the kind of plays he made more regularly in college. The NHL game hasn't slowed down yet to the point where he converts on chances consistently. The Leafs coach envisions Hyman eventually scoring more regularly.

Hyman has five goals in his first 31 games (a 13-goal pace) and is second among Toronto forwards with a 52.9-per-cent puck possession mark.

Competitiveness has helped drive Hyman, a 2010 fifth-round pick of the Panthers, to the NHL and now a regular spot on the up-and-coming Leafs. In a game against San Jose last week, Hyman blocked a hard first period from Norris trophy candidate Brent Burns. While it stung, Hyman was back on the ice a few moments later.

He sat out practice the next day, though according to Babcock he wanted to be out there.

"We spend a lot of time talking about skill, but one of the most important skills in hockey is competitiveness," Babcock said.

An author of children's books in his spare time, Hyman said he's always been the type to check off his goals.

He wanted to get to college, for example, and once there it was earning All-American status (which he did) and winning a national championship (which he didn't). He'll even break the season down into five-game segments, a tool Babcock also employs for the team more generally.

"When you look at the small picture, it makes the big picture a lot easier to look at," Hyman said. 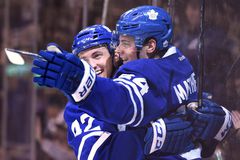 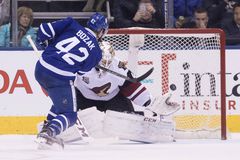