On the second-last Saturday of June, 1992, Larry Bertuzzi was on a canoe-shopping expedition with his son in the Haliburton Highlands. It was a typical weekend at the start of the Ontario cottage season, and Bertuzzi, a prominent Toronto labour lawyer, was blissfully disconnected – and completely unaware of the drama unfolding in Montreal at the NHL's annual entry draft.

A year after the Quebec Nordiques had drafted Eric Lindros, a generational player – the Connor McDavid of his era – with the first overall pick, his rights were being shopped around the NHL. Lindros didn't want to play in Quebec, and after a year of trying unsuccessfully to get him to change him mind, the Nordiques finally gave up and notified the rest of the NHL that they would listen to offers.

The managing partner in the Nordiques ownership group was Marcel Aubut, a loud and flamboyant entrepreneur who muscled his way into the trade talks that started out in the hands of the three general managers: Pierre Page in Quebec, Neil Smith in New York and Russ Farwell in Philadelphia. And Aubut managed a feat that would be impossible today.

After Page composed lists of players he'd want from each team in return for Lindros, Aubut agreed to trade Lindros to both the Flyers and the Rangers, and then left it in the hands of the NHL to sort out the confusion.

Which brings us back to Bertuzzi, who was asked by then-NHL president John Ziegler Jr. to settle the dispute. NHL owners were familiar with Bertuzzi because of his work on contract negotiations with the NHL officials' association, which is why they turned to him to sort out the Lindros-trade mess.

What followed were 10 days that shook the NHL to its core, ending with Lindros's rights being awarded to Philadelphia. In exchange, the Flyers surrendered a king's ransom: six players, including future Hall Of Famer Peter Forsberg, Mike Ricci, Ron Hextall, Steve Duchesne, Chris Simon and Kerry Huffman, along with two first-round draft picks and $15-million (U.S.) in cash. Farwell would later suggest the Flyers' operating principle in putting together their package was simple: What price would someone have paid to land Wayne Gretzky when he was still just 19?

Along with the late Pat Quinn and fellow players Sergei Makarov and Rogatien Vachon, Lindros will be inducted into the Hockey Hall of Fame this coming Monday. His legacy was forged on the ice, but his impact off the ice was significant, too.

The 1992 Lindros trade was one of the most influential transactions in NHL history, perhaps second only to the trade that sent Gretzky from Edmonton to the Los Angeles Kings. Not only did the Lindros deal affect the fortunes of three NHL teams, it accelerated the wild salary escalation that would follow, and ultimately obliged the NHL to modify and codify its trade protocols so that a team couldn't trade a player twice.

Bertuzzi didn't know any of that on that Father's Day weekend long ago when NHL vice-president Jim Gregory called him at his cottage, told him what had happened, and asked him to go to Montreal to help resolve the dispute.

"They told me, 'Here's the deal: We have these clubs and they have a dispute and we'd like you to resolve it,'" recalled Bertuzzi. "I said, 'Fine, give me all the written material on the arbitration process and the trade rules.' They said, 'Well, it's pretty simple.' There were two lines under the bylaws that said, 'If there's a dispute involving a trade, the matter shall be resolved by the president, or, if not the president, by an arbitrator.' And when I asked them to tell me the rules on a trade, they said, 'Well, we don't have any.'"

Nowadays, the NHL has firm protocols to determine when a deal is completed. Teams involved in a transaction get on a "trade" call and vet the deal and all the player contracts through Central Registry before a trade is officially processed.

With so little to guide him, Bertuzzi had to make it up as he went along. He began by asking the three teams to frame the question they wanted him to answer. When they were unable to do so, and with Ziegler's blessing, he took matter in his own hands. Bertuzzi thought there might be some resistance from one or all of the teams to his approach, but found just the opposite occurred.

"It was like the sheep saying, 'Thank God the border collie arrived.' Unbelievable," said Bertuzzi. "There was no push back. It was like a breath of fresh air – they finally had someone there to run the show."

In the next six days, under a press blackout, Bertuzzi said all the affected parties developed into "almost a Stockholm syndrome-like group. We were just locked in Montreal from Sunday until we finished the hearing at four in the morning the following Saturday."

Bertuzzi marked the end of the hearing with a nap and a short return flight to Toronto. He took the next day off to attend a family member's 50th wedding anniversary celebration. On Sunday, he started to digest all he'd heard. By mid-afternoon, he said, "the penny dropped and then I just wrote."

"I had testimony from other general managers, about how they'd made trades, but it was all so loosey-goosey," said Bertuzzi. "That literally was the way things were done – all handshakes. So when you try to make a legal case out of that, it's pretty difficult. The real thing for me was, not just to determine what happened but to try and get from the evidence what the accepted criteria was for saying 'that's a deal.' "Thankfully, it revealed itself. When Quebec and New York explained why they thought they had a deal at 12:30 [a.m.], I thought, 'but that exact same thing had happened with Quebec and Philadelphia an hour earlier.' And that was how it went."

In his prime, Lindros was a high-scoring wrecking ball, the dominant player of his era, according to Flyers teammate Joel Otto. Lindros averaged more than a point a game in each of his eight years with Philadelphia, and won the Hart Trophy as the league's most valuable player in 1995.

On the nights Lindros was on his game, no one played with the same combination of skill and physical intimidation. His line with John LeClair and Mikael Renberg earned the last good nickname in the game – the Legion of Doom.

Lindros's hard-hitting style eventually caught up with him; a series of concussions derailed his career, dropping his level of play to the ranks of mere mortals for his final five seasons. He retired in 2006-07 after stops in New York, Toronto and Dallas.

Soon after the Flyers were awarded his rights, Lindros signed his first contract, one that paid him an annual average salary of $3.5-million, or about $1-million more than the reigning MVP Mario Lemieux was then earning. The Lindros camp had the Flyers over a negotiating barrel, and could have asked for more. But his agent during those early years was Rick Curran, who had a number in mind throughout the standoff with Quebec – and he stuck to it, even though all the leverage in the negotiations was on his side.

"That's when salaries all started jumping up – it all took off from there – but Eric was the precedent-setter, because he immediately was making more than the MVP from the previous year," said Curran.

"Really, for the Flyers, it was an investment. Up to that point, clubs paid players' salaries based on their performances, whereas that contract was effectively an investment in the future of the Flyers, because they were building a new rink."

According to Page, the template for the Lindros deal was a trade made in the National Football League in October, 1989, between the Dallas Cowboys and the Minnesota Vikings.

The Vikings acquired star running back Herschel Walker, but gave up five players and seven draft choices in order to land his rights. The Walker deal eventually became known as "the Great Trade Robbery."

"The Cowboys won two Super Bowls with Jimmy Johnson [as head coach] and one with Barry Switzer," said Page, "so that trade really brought them three Super Bowls. This trade – Lindros – brought two Stanley Cups to Quebec, which became Colorado. "Lindros's motivation was, he didn't want to go to a small market. He wanted to make a lot of money – and win. I think he probably made less money than if he'd come with us because we offered him 10 years and $50-million, which was a lot of money for 1991."

Page turned over to his successor, Pierre Lacroix, a Nordiques team that included three future Hall of Fame centres (Forsberg, Joe Sakic and Mats Sundin). After all these years, he is content with the outcome.

"Lindros didn't break any rules," said Page. "He followed every rule, but it turned out to be greatly positive for Quebec that [the Nordiques] had to trade him. Lindros turned out to be a hell of a player who didn't win [a Stanley Cup]. But there's no guarantee he would have won in Quebec, because we wouldn't have had the five other players we got in the deal. For me, the impact is in the result." 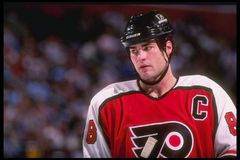 P.K. Subban to be featured in HBO Canada documentary
November 9, 2016
Don Cherry tells ‘left wing kook’ Americans to stay home
November 9, 2016
Follow Eric Duhatschek on Twitter @eduhatschek
Report an error Editorial code of conduct
Due to technical reasons, we have temporarily removed commenting from our articles. We hope to have this fixed soon. Thank you for your patience. If you are looking to give feedback on our new site, please send it along to feedback@globeandmail.com. If you want to write a letter to the editor, please forward to letters@globeandmail.com.
Comments