Everyone around the Winnipeg Jets had the same concern on Sunday. Would the players come out listless against the Carolina Hurricanes after an emotional 3-2 win Friday against the Washington Capitals?

The answer? Not listless, careless.

The Jets lost 4-3 to Carolina thanks to a rash of penalties and a lax third period in which Winnipeg gave up a 3-2 lead and allowed Carolina's Chad LaRose to score the winning goal with just 1:22 left in the game.

The loss left Winnipeg stuck at 76 points, two back of Washington which holds the final playoff spot in the Eastern Conference. The Jets got some help Sunday from the Chicago Blackhawks, which beat the Capitals 5-3. But that was no consolation for a bitter and frustrated Jets' coach Claude Noel.

Noel blamed just about everyone associated with the team for the loss, from the players and coaches to the trainers, saying nobody was properly focused. "It's all of us, that includes trainers and everybody. It's all of us in the room," he said. "Maybe we're happy and too busy being happy that we won on Friday and that we can just show up on Sunday. You can say the right things. It's not what you say, it's what you do. It's your actions."

Forward Tanner Glass echoed the sentiment saying the team clearly lacked the same intensity as Friday, even though everyone said before the game that wouldn't happen.

"We didn't have the same effort as we had against Washington, that's for sure," he said. "I think we played a little casual throughout the whole game and you give them enough chances and they are going to burn you."

The win gave Carolina 73 points, just three back of Winnipeg. Carolina was all but written off a few weeks ago but the team has quietly climbed back into the playoff picture. The Hurricanes have been picking up points since Christmas, including 13 in its last 16 road games.

"There is a lot of fight in our group," said coach Kirk Muller, who took over last November, replacing Paul Maurice. "We don't know what is going to happen at the end, but we're creeping up."

The Hurricanes were led Sunday by Eric Staal, whose game has been transformed since last fall. Staal scored twice and got an assist on the winning goal. He also endured taunts of "Jordan's better" from the MTS Centre crowd, in reference to his brother who plays for the Pittsburgh Penguins.

"He has taken this team and has been an unbelievable leader," said Muller. "Everybody talks about his start, but I think that people should talk about how he has played his last 40 games."

Staal shrugged off the chants and cautioned those who have counted out the Canes.

"We'll take it and keep working, because stranger things have happened and we're going to keep playing hard," he said. As for the chant: "I mean, Jordan's good, but I don't know if he is better."

The Jets couldn't have asked for a better start as Carolina took three quick penalties to begin the game, including handing the Jets a five on three. And yet it was Carolina that got the first goal, a short handed one at 11:11 of the first by Jussi Jokinen.

The Jets tied it up four minutes later on a shot from Nik Antropov, who has re-discovered his game since being put on the fourth line recently. Antropov has now scored five goals in the last eight games. He'd only scored seven in total before that. However, he left the game part way through the second period with a lower body injury.

Then Winnipeg started taking penalties. The Jets got hit with four straight to end the first and begin the second period, including handing the Hurricanes a five on three advantage. After the Jets fourth penalty, Staal got a power play goal to give Carolina the lead at 5:26 of the second period.

Winnipeg tied it five minutes later when forward Antti Miettinen scored his first goal of the season. But Winnipeg was immediately put back on its heels after defenceman Zach Bogosian received a five-minute major and game misconduct for flattening Hurricanes' forward Andrea Nodl. The Jets didn't have to kill the entire penalty since Carolina took one more penalty to cut short the power play. In the end, both teams had five power plays.

The Jets took the lead with less than two minutes left in the second period when Miettinen scored once again. But Winnipeg couldn't hang on and let the lead and the game slip away in the third on goals by Staal and LaRose.

"We were up 3-2. You have to decide, do you want to win the game or do you want to score goals?" said Jets' goalie Ondrej Pavelec. "We need every point and we made a couple of turnovers in the third and it cost us the game. We didn't deserve it."

The Jets now head off on a three-game road trip starting in Pittsburgh Tuesday and finishing with a back to back in Washington Friday and Nashville Saturday. Winnipeg is 1-10 in the second game of back to backs this season.

"These next games are going to identify what we are," said Noel. "And who we are." 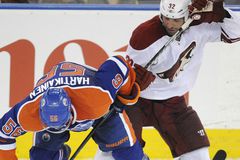