Jhonas Enroth bent forward in his net and slowly slid back into it, letting the back of his helmet press against the cross bar as he awaited the next shot.

At the other end of the Toronto Maple Leafs practice rink, his counterpart, Frederik Andersen, filled the goal, his enormous 6-foot-4, 230-pound frame doing much of the work for him.

If Enroth is jealous, he doesn't let on.

No position in hockey has become more size-obsessed than goal. While the increased speed and emphasis on puck-handling has opened doors for small defencemen such as Boston's Torey Krug and forwards such as Calgary's Johnny Gaudreau, the butterfly position and blocking style has had the opposite impact on netminders.

Over the past 20 years, being able to take up as much square footage as possible – like Ben Bishop, Tampa's 6-foot-7 behemoth – has become one of the most important traits for a hockey goalie. It's hurt the little guys such as Enroth, most of whom are now relegated to the minors and European leagues.

Last season, for example, the average height for a starter in the NHL was 74.5 inches – the tallest in league history and almost three inches taller than what it was in 1995-96.

No goaltender under 6-foot-1, meanwhile, started more than 38 games.

Off the ice, in street clothes, Enroth isn't tiny. At 5-foot-10 and 170 pounds, he looks athletic and agile, much like promising Leafs rookie Mitch Marner. They're the two smallest players on the team, but not out of place.

In the goal, however, Enroth is an endangered species: almost extinct.

But he is also an inspiration – even to bigger goalies, established NHL stars and goalie coaches who have witnessed the small Swede in action up close. They know he has something special.

"He's the most composed goalie I've ever seen," Leafs prospect Garret Sparks said after sharing the ice with Enroth in training camp. "Obviously he's not leaning on his size to make saves. He has to be in perfect position and reading the shots perfectly off the stick every time. It's something I see him do that I'd like to implement more into my game – his level of control and understanding of where pucks are going and the save selection."

"Jhonas is a great goalie," said Vancouver Canucks netminder Ryan Miller, who played several seasons with Enroth in Buffalo. "His anticipation, his compete levels, are strong. He'll steal some points for the Leafs."

Enroth grew up in Stockholm, the middle of three hockey-crazy brothers who all went on to play pro. He was the only goalie, and he began training when he was 12 with Thomas Magnusson, Sweden's head goalie coach and someone who is widely regarded as the top coach at the position in Europe.

But it wasn't until Enroth was drafted into the NHL – as the Sabres' second-round pick in 2006 – that he learned he was undersized. It's a label he has been fighting since.

"I've always had a chip on my shoulder [since then] because I'm a smaller guy," Enroth said. "I want to prove to people that I can play."

What Enroth learned from a young age from Magnusson has helped make that happen. He learned the technical side of the position – that good positioning, spatial awareness and understanding of puck physics could trump anything.

Those who understand the nuances of goaltending explain that the only reason Enroth has been able to beat the NHL trend of relying on huge goalies such as Andersen is by using his mind, including long video sessions during which he analyzes how he can better fill the net.

Enroth now intuitively knows, more than most, where he is at all times and how much net he is covering.

"Jhonas's biggest asset is his ability to read the game," Magnusson said. "He is a master of 'box control' – he knows how much net he covers in any given situation, and he has a plan how to fill that space."

"He's always studying what he can do better," added Mike Valley, the Dallas Stars director of goalie development. "You can have big goaltenders that have lots of holes, but he's like this little square box that moves around and just fills space. I think he's an incredibly talented goalie. He also has a lot of mental strength. He has the ability to go in and win games for you."

Enroth seemed almost an afterthought when the Leafs signed him on a one-year, bargain-basement deal at the end of August. He played well but sparingly last season in Los Angeles, and Toronto is his fourth NHL team in three seasons. "Too small" is often the reason given by executives around the league.

Even though Andersen has the big contract and is expected to get the bulk of the starts, Enroth could be a big factor for the Leafs. Andersen is coming off an injury and is hardly a proven commodity himself. And, minus the one season he spent in Buffalo, when the Sabres were tanking to try to get Connor McDavid, Enroth's save percentage is close to the NHL average.

With Andersen struggling to open the season, Enroth made 24 saves in his first start as a Leaf on Thursday night in a 3-2 loss in Minnesota. The Leafs, 1-1-2, are in Chicago on Saturday night to face the 2-2 Blackhawks.

Enroth excels in close games, something Valley says is due in part to his incredible patience. Enroth is 11-5 all-time in shootouts and has the best save percentage (.757) of any active goalie who has faced at least 50 shots in the skills competition.

"Jhonas can stand up on shots that most people are going to drop and reach for," Valley said. "He has that ice in his veins to be able to outwait guys. I wish I could take a lot of his skill sets and incorporate them into a bigger goaltender."

At 28, Enroth knows his chances of becoming a No. 1 goalie in the NHL are fleeting. He called spending nearly two months without a contract in the summer "nerve-racking."

He is hoping that the NHL's proposed changes to goalie equipment – which will slim pants and upper-body equipment, potentially this season – will help smaller goalies, as they will take away more material from bigger bodies.

He also argues that teams need to give more goalies like him a chance and stop the trend of only drafting 18-year-olds that are 6-foot-2 and above.

There can be exceptions to the rule, Enroth says.

He is one of them.

"I like to look at myself as a fighter," Enroth said. "No one likes to lose. We're all trying to make a name for ourselves and trying to take that next step in our careers and trying to be successful with the team." 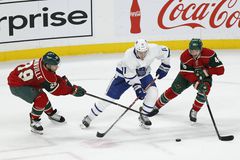 Laine scores hat trick as Jets beat Leafs in overtime
October 20, 2016
Teen titans more than ready to contribute to NHL
October 18, 2016
Follow James Mirtle on Twitter @mirtle
Report an error Editorial code of conduct
Due to technical reasons, we have temporarily removed commenting from our articles. We hope to have this fixed soon. Thank you for your patience. If you are looking to give feedback on our new site, please send it along to feedback@globeandmail.com. If you want to write a letter to the editor, please forward to letters@globeandmail.com.
Comments