When Hockey Canada needed a coach for its women's hockey team less than two months before the Sochi Olympics, Kevin Dineen stepped up. Not long after he won gold, the phone rang again for a job leading the under-18 men's team.

"One call to him at the under-18 level, he just said yes right away," Hockey Canada's Scott Salmond said.

On Monday, Dineen began the next chapter of his coaching career as he was named as an assistant on Joel Quenneville's staff with the Chicago Blackhawks.

"He doesn't care if he's coaching women or men or kids or what it is. He's a coach, and that's what he loves to do," Salmond said in a phone interview. "To me, great coaches like challenges and they want to coach, they want to be busy, they want to work and Kevin's a great example of that. It wasn't a surprise to me that someone in an organization like Chicago would recognize that and his value and what he'll bring there."

The Toronto native will return to the NHL less than a year after being fired as head coach of the Florida Panthers, armed with plenty of international experience. Salmond, Hockey Canada's senior director of hockey operations and national teams, enjoyed how much energy and passion Dineen put into his work with the national women's and under-18 men's teams, even though he had no previous connection to either.

"I think that the players realized right away that he cares," Salmond said. "He really cares about them. And one thing he talked about with the under-18s the whole time was just trying to make them better and trying to have them leave with something. And yeah we wanted to have team success, but if they could gain something from the experience, then that was great."

From those experiences, Salmond expects Dineen to be an even stronger coach as he returns to dealing with professionals with the Blackhawks.

"I know he spent a lot of time one-on-one both with the women and the men and communicating with them and sharing ideas and having them buy in and share their ideas as well," Salmond said. "The communication side, I think, is huge. Good coaches have that, and certainly it's a strength for him."

Dineen conceded in Sochi that he was learning on the fly how to communicate differently with women than he did men in previous jobs, joking that he wasn't using the F-word nearly as much.

He was not made available by the Blackhawks, who have a policy of not allowing assistant coaches to speak to reporters. Dineen wrote on Twitter that he was "excited about the opportunity to work with this group of people. World class players and organization."

The 50-year-old replaces Jamie Kompon, who became general manager and coach of the WHL's Portland Winterhawks, filling the void left by Mike Johnston when he took the head-coaching job in Pittsburgh.

"I am thrilled to join Joel Quenneville, a future hall of fame coach, and (assistant) Mike Kitchen, as we strive to reach the ultimate goal in professional hockey," Dineen said in a statement released by the Blackhawks. "The measure of success is very high in Chicago. I look forward to supporting the coaching staff and working with some of the best players in the National Hockey League."

During his playing days, Dineen spent time as a linemate of Quenneville's with the Hartford Whalers. In total he played 1,188 NHL games, finishing with 355 goals and 405 assists.

"Kevin brings proven leadership qualities, having served as an alternate captain and captain for several of his teams during his 19-year NHL career," Chicago general manager Stan Bowman said in a statement. "He will bring another well respected voice to our coaching staff and we look forward to his contributions to our team."

Dineen represented Canada in international competition six times as a player, including the 1984 Olympics and 1987 Canada Cup. He only added to his international resume with his most recent international coaching jobs, and Salmond called Dineen "a great friend to Hockey Canada."

Salmond credited Dineen for changing "a bit of the culture" with the women's team after taking over for Dan Church, who resigned in December, and capturing the nation's attention with the gold-medal run. With the under-18 men's team, which won a bronze medal, Salmond said Dineen did a fantastic job by helping Canada play to a level it hadn't reached in recent years.

"I think we are very grateful for what he was able to bring," Salmond said. "He's obviously a professional, a former professional player and I think he brings that kind of mentality to coaching. He was great for our program, kind of gave us another perspective and helped us with some things both on the women's side and on the men's side that he'll leave behind."

Dineen coached the AHL's Portland Pirates for six years before taking over the Panthers. Florida made the playoffs in one of his two full seasons behind the bench, and Dineen was fired 16 games into 2013-14. 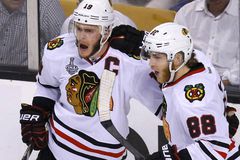