In the colourful, descriptive language of Los Angeles Kings defenceman Drew Doughty, last Monday night's game against the Vancouver Canucks was a "must win." When the Kings didn't, Tuesday's date with the Edmonton Oilers was upgraded to a "must, must win." That didn't happen either.

So now, with their playoff lives hanging in the balance, how does Doughty view Thursday's meeting with the Calgary Flames?

"This is basically a Game 7 for us," Doughty said, "so we're going to treat it that way. It's a must-win game. It's our only shot to still get in the playoffs."

No game is actually must-win until the mathematical possibility exists that if you lose, you're out – which is exactly where the Kings find themselves now. The defending Stanley Cup champions are in danger of becoming the first team since the 2006-07 Carolina Hurricanes to win the title one year and miss the postseason the next.

Vegas odds-makers had Calgary as a 200-to-1 long shot to win the Stanley Cup to open the season, while L.A. was at 8 to 1, but it is the Flames who can knock out the Kings with a win and secure a playoff spot before Saturday's regular-season finale in Winnipeg.

Even if they happen to lose in regulation to the Kings, a result that would leave the teams tied at 95 points each, the Flames would have a second chance to get into the playoffs with a victory over the Jets. The first tiebreaker, regulation and overtime wins, favours Calgary by three – 40-37.

Until they are eliminated, however, the Kings are still the champs, a fact not lost on Flames forward Brandon Bollig.

Bollig played for the Chicago Blackhawks last season, when the Kings took them out in the seventh game of a wonderfully played Western Conference final.

"It's tough to ever count a team out that won three Game 7s on the road last year en route to winning the Stanley Cup," said Bollig, who is likely to go into the Flames lineup in place of the injured Lance Bouma.

"I was, unfortunately, the loser of one of those games, so we know the type of team they are. They never quit. Our MO this entire year has also been a no-quit attitude, so I think that matches up well. We've had good games against these guys all year. Tomorrow's going to be an absolute war."

One of the "good" games Bollig alluded to was on Dec. 22, the final date before Christmas, when Calgary rallied late in regulation to tie the Kings and then won 4-3 in overtime, behind Johnny Gaudreau's hat trick. That result amounted to a three-point swing – and if that single game had gone the other way, it would be L.A. in control of its playoff destiny, and Calgary hanging on for dear life.

"To be honest, they got pretty lucky in that game," Doughty said. "One guy tried to pass it to the front of the net and the puck went in off my skate.

"You can look back on that game, and say it affected where we are in the standings, but there's been so many games like that, too. The past is out of our control. All we can do is learn from it. Right now, it's all about tomorrow. It's the biggest game of our season – by far."

Wednesday was a day when the clichés of modern-day pro athletes actually rang true. The Kings do have their backs to the wall – figuratively, anyway. But it is also familiar territory to them. In 2012, ahead of their first Stanley Cup championship, the Kings squeezed in as an eighth seed, earning a playoff berth on the final Thursday of the regular season.

Accordingly, going down to the wire is nothing new for them. Still, this is cutting it close – because the Kings could win and still not qualify for the playoffs. Calgary, for example, needs just two points from two games, which it could hypothetically earn even with a pair of overtime losses.

Doughty expressed his "complete confidence in this group," noting: "We've been through a lot together over the last three years. We've come through in so many big games – and this is another one." However you look at it, or do the complicated arithmetic, it's a dynamic finish to a regular season in which the difference between the first- and eighth-place team in the conference is a dozen points, or roughly one extra victory a month.

Flames, Jets just one win away from post-season play
April 8, 2015 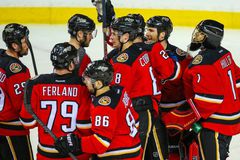 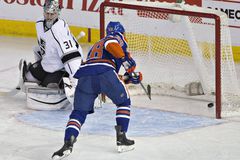