The Toronto Marlies crowd was in a full throaty roar, with the franchise record gathering as loud as they had been all night.

"Let's go Marlies," they chanted, over and over, adding some life to a scoreless draw that was nine minutes deep into overtime.

Then came perhaps the strangest goal to decide a pivotal hockey game in these parts.

As Norfolk Admirals defenceman Mike Kostka dumped the puck in off the glass, Marlies netminder Ben Scrivens went behind the net to play the puck, as he had dozens of times in the night.

Only this time the puck didn't ring around the glass. It hit a stanchion, bounced out sharply towards the open goal and in.

"That's a one in a million thing... I was just hoping it wasn't going in," Scrivens said.

The 8,000 in attendance then sat in stunned silence as the Admirals poured onto the ice to celebrate the 1-0 win that gives them a stranglehold of a 3-0 series lead.

Marlies head coach Dallas Eakins expressed his frustration at not only the loss, but how the winning goal was scored.

"I would rather somebody take a pair of steel toed boots and kick me in a delicate region than to lose a hockey game like that. That is a tough way to lose."

Games 4 will go on Saturday as the Marlies attempt to battle back into a series where one bad bounce may have decided so much.

The shame of it was, beyond the one understandable error, Scrivens had been the star of the night and, really, of these playoffs for the goal-starved Marlies.

In fact, with so little able to develop offensively, the two young goaltenders were the story throughout – and that's not exactly a surprise. They have essentially played like this all postseason long, with Admirals netminder Dustin Tokarski pulling into the lead statistically after Game 2 with his .942 save percentage a hair better than Ben Scrivens's .941.

Those are the sort of gaudy numbers Los Angeles Kings netminder Jonathan Quick has been posting during his team's run to within one win of a Stanley Cup, a run he's put together despite the fact he's just four years removed from a lengthy stint in the ECHL.

That's often been the way it goes these days in the crease, with who succeeds and who fails usually correlating with solid play in the minors over a season or two.

On that front, Scrivens has certainly exceeded expectations, posting a .926 save percentage during the season before rising to the occasion in these playoffs with his team down as many as four key forwards to injury some nights.

That strength in goal (and on the penalty kill, where the Marlies have an incredible 94.6 per cent kill rate after going 4-for-4 in Game 3) is basically a mirror image of their struggling parent club, where a solid backstop and improved defensive play are atop the list of needs seemingly every offseason.

Despite Scrivens's rise, however, the Leafs brass appear committed to bringing in a veteran backstop for next season, which likely leaves the personable 25-year-old attempting to unseat friend (and former Marlie) James Reimer at training camp in the fall.

While Reimer has an advantage given his NHL experience and two more years of a $1.8-million-a-season contract, Scrivens's track record in the AHL is both longer (72 games to 44 in the regular season alone) and better (.925 save percentage to .920).

Contract or not, the Cornell grad may ultimately prove to be the better netminder, even if his 12-game audition in the NHL this season was somewhat uneven.

How this one memorable bounce goes down on his resume remains to be seen. But beyond better karma, what Scrivens has left to learn at the AHL level is up for debate. 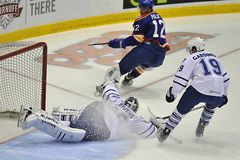 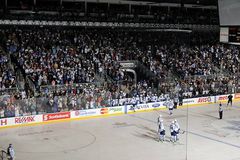 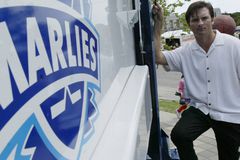