You could call it the zero line.

No goals. No assists. Only 10 combined shots on goal in 52 games and 358 minutes played all season.

And just enough of an impact to bite the Toronto Maple Leafs in the behind once in a while.

The Leafs lost to the San Jose Sharks for a lot of reasons on Tuesday night, with the primary one being that the Sharks are simply one of the best teams in the NHL and the Leafs are not.

For a team that has laboured mightily to score of late, it's a head-scratching decision to keep running out a no-fer line again and again.

It was made all the more glaring by three key happenings in the 4-2 loss:

a) McLaren took a dumb roughing penalty five minutes into the game while defending Smithson from a clean hit, putting pressure on a PK unit that has laboured of late

b) Tyler Bozak left the game at the midway point with an upper body injury, meaning everyone else down the lineup moved up a rung

"I thought they were the difference in the game, to tell you the truth," Sharks coach Todd McLellan said of his fourth line. "Maybe their minutes don't reflect it, but their energy and the passion which they played with rubbed off on others."

There's obviously a lot more wrong with the Leafs right now than simply their fourth line. They have lost five games in a row, six of seven and have just two regulation wins in their last 14 outings. They have just 18 even strength goals in those games.

Now the goalies and the special teams are faltering under the workload.

So everything that could go wrong is.

But on a team battling injuries (primarily to Joffrey Lupul and Dave Bolland right now) and absences (like Nazem Kadri's unexpected one for a family funeral), you need to dress as much scoring depth as possible.

One of the issues is the Leafs simply don't have many options to turn to. They can't make a trade to bring in salary as they're right against the cap, and their minor league affiliate, the Toronto Marlies, is tapped pretty dry and having just as hard a time scoring goals right now.

(The Leafs even lost a little of the meagre depth they had down the middle when they traded Joe Colborne in training camp, another casualty of management's insistence on having two one-dimensional fighters on such a cap-strapped roster.)

There's no question that injuries have hurt Toronto's scoring depth this season, but the reality is also that the Leafs are in the middle of the pack in man-games and salary lost to injury this season.

Your average NHL team suffers substantial losses every season – to the tune of two or three players being out per game – and the Leafs have been remarkably healthy on the blueline (which has significantly underperformed) and in goal.

This drop off in scoring was also predictable, as Toronto benefited from an inflated shooting percentage for a lot of last season in becoming one of the NHL's highest scoring teams.

But the Leafs most pressing issue – a lack of possession – is hurt by the fourth line. As has been beaten to death, they have been outshot heavily this season, to the tune of 575-782 at even strength. That means Toronto is generating only 42.4 per cent of the pucks on goal, 29th in the league.

Those ratios are not only the three worst marks on the team, they rank last (Smithson), fourth last (McLaren) and 11th last (Orr) in the entire NHL among players that have played 10 or more games.

And they're not exactly getting the tough minutes. (In fact, Carlyle has started his fighters in the offensive zone a higher percentage of the time than any other regular except Kadri.)

These are desperate times for the Leafs, especially given their schedule against a run of powerhouses in December. If there was ever a time for GM Dave Nonis and Co. to take a long, hard look at their roster and put players on waivers to open holes for talent that can score once in a blue moon, it's now.

That goes beyond the fourth line, too.

Because – unlike the Sharks, who got two goals with their bottom six forwards on the ice to continue to earn praise from their high profile teammates like Joe Thornton – the players currently on the low end of Toronto's roster just aren't going to be able to get the job done.

In the long run, that matters. It certainly did on Tuesday. 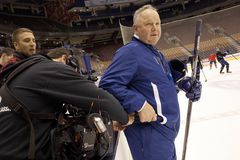 Struggling Leafs unable to overcome poor first period in loss to Sharks
May 11, 2018 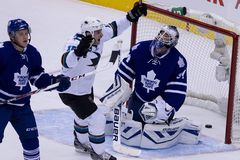