He came. He scored. He went to the Toronto Marlies.

After four games with minimal ice time on the fourth line, the Toronto Maple Leafs sent the 22-year-old centre down to the minors on Wednesday, ending a 22-game stretch in the NHL that had some pretty impressive high points.

With Tyler Bozak out with injury, Holland at one point had eight points in 10 games and was playing up the lineup, looking very much like a steal for GM Dave Nonis, who plucked him out of the Anaheim Ducks system for a depth prospect and two draft picks.

But with the Leafs forwards finally getting healthy, coach Randy Carlyle couldn't find a home for Holland of late, giving him an average of only 6.5 minutes a night since Bozak's return.

On a basic level, sending him down to get more playing time made sense. Holland is young, still developing and needs to work on his game away from the puck.

There's also the tricky aspect to the trade with the Ducks to think about, as if he plays 25 games with the Leafs, one of the draft picks involved improves from a third-rounder to a second-rounder.

(This for a team sliding in the standings and that has already moved one second-round pick – either in this year or next – in the deal for netminder Jonathan Bernier from last summer.)

The shame of Wednesday's move, however, is that for all Holland's inexperience he brought some much needed elements to the Leafs. This is a team that has struggled badly to score at even strength for more than two months, averaging only 1.60 goals per game 5-on-5 going back to the end of October.

In a limited sample and with the help of an inflated on-ice shooting percentage, Holland had a better point-per-minute scoring rate at even strength than any Leaf save Phil Kessel and Tyler Bozak.

At the very least, he could have been part of a more skilled fourth line, something Toronto hasn't had in recent memory.

In fact, if you look around the league, Carlyle is more reluctant to use his bottom 10 to 12 forwards than almost any other coach. Only the Vancouver Canucks' John Tortorella has had a shorter bench leaguewide, playing his fourth liners less than seven minutes a game – or about a minute less than the Leafs generally offer theirs.

That's had a ripple effect through the Toronto lineup, as every other unit is expected to play a lot. The top line of Kessel, Bozak and James van Riemsdyk, for example, averages nearly 21 minutes a game – the second highest in the NHL behind only Vancouver's top three forwards.

The Leafs second line, meanwhile, is the third-most used second unit in the NHL. And their third line – usually made up of Nikolai Kulemin, Jay McClement and David Clarkson, a trio that has combined for nine goals all year – is the most played third line in the league with an average of 16.5 minutes a night.

Injuries have contributed to the problem – with Nazem Kadri and others filling in for players like Bozak – but this is a trend that's been evident for a couple years now. Having enforcers Colton Orr and Frazer McLaren as two of the team's top 13 forwards is a significant part of the issue, especially when a minor injury like the one to Clarkson this week forces both onto the same bench-warming line.

"We were in a situation where we only have one extra body," Carlyle said of his lineup in Tuesday's 5-3 loss to the New York Islanders, a game where Orr's 5:27 in ice time was the most anyone on the fourth line played. "The body that we have has been Frazer McLaren, and he hasn't played a tremendous amount. With the injury to Clarkson, we had to put a body in and he was the guy."

But he wasn't the guy the Leafs needed, not down two goals to a struggling Isles team playing its second night of a back-to-back. This was an avoidable issue, as McLaren – who has averaged only 4 minutes, 29 seconds of ice time a game this season – could have slipped through waivers to allow a more skilled body to fill in for Clarkson.

Instead, Holland was sandwiched between the two fighters on the bench, getting only one shift in the third period and none when his team was trailing by two and needing a goal against a team that uses all 12 of its forwards more than almost any other in the league.

McClement, meanwhile, played two of the final 14 minutes despite owning only one goal in 43 games this season.

It wasn't the reason Toronto lost the game, but it was indicative of a trend where Carlyle has leaned hard on defensive veterans instead of more creative younger players, even when it's made little sense to do so.

Now Holland is gone in favour of Carter Ashton, and the Leafs are starting a stretch of five games in seven nights on Thursday night in Carolina. Their depth is about to be tested, from here until the Olympic break, and using one of shortest benches in the NHL could make that kind of a gruelling run even tougher.

How are minutes given out in the NHL?

The average NHL team plays its first line about 19 minutes a night and its fourth line closer to 10, but there's a lot of variation in between. Looking only at forwards with 20 games played this season, this is a graphical representation of how teams deploy their lines. Some, like Toronto and Vancouver, lean heavily on their top players and barely use their last three or four forwards. Others like Detroit take a more balanced approach. Injuries, midseason trades and shuffled lines have affected these numbers, so this is meant to be more of a rough snapshot of what teams are doing than a precise measurement. 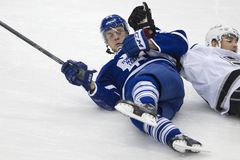 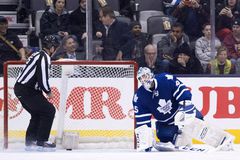 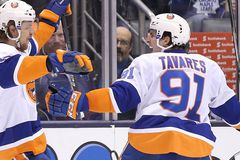 Mirtle: Youth should be served when Canada selects third goalie for Sochi
January 6, 2014 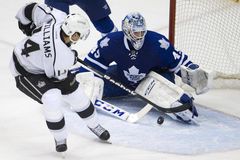 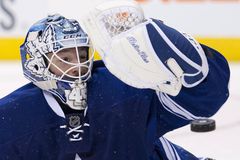 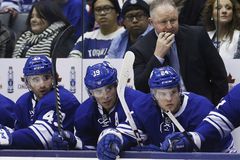 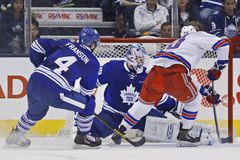