This weekend, Mike Babcock will settle for two points.

The prodigal coach will be back at Joe Louis Arena for the first time in a game that counts on Friday night, and his underdog Toronto Maple Leafs are hoping to pull off a surprising takedown of a team with a lot more experience – and expectations.

Babcock coached in Detroit for a decade before opting to take on the mountainous challenge that is leading the rebuilding Leafs, signing a record eight-year, $50-million deal in the summer.

But, despite being spurned for a division rival, the Wings apparently have a touching ceremony planned to honour the man who won more games behind that bench than anyone – even Scotty Bowman.

"It would be great for him to get his first win [with the Leafs] in Detroit," defenceman Matt Hunwick said.

"It means something to us," forward Peter Holland said. "We definitely want to get this one for him."

Babcock, ever the hard ass, was less sentimental.

"They've got a real good team," he said when asked about going back, before later allowing that it would be "fun" to be in Detroit for the game.

"But we need points."

Need is a bit strong, although a win would certainly help team morale. The Leafs lost their final five preseason games, and despite a strong effort, lost again in their home opener 3-1 to Montreal on Wednesday night.

Scoring has been their biggest issue – something that could well become a season-long theme given their personnel.

Even so, Babcock has done a great job of building up his players' confidence and getting a buy-in to what he's preaching.

His voice, however, has had better days, as a recent illness wiped out his usually sharp bark the past few days.

"Well on its way back," Babcock said. "They had a couple days off of me [yelling] already."

What will be interesting Friday is how the game will unfold stylistically, as Babcock has some obvious intel on the Wings and they know what he preaches so well.

The reality is that, in Detroit, after a decade of hearing it, some of the Wings had tired of Babcock's message.

In Toronto, after a month, there's little evidence of that.

It's the opposite, in fact. The Leafs players are hungry to hear what he has to say, anxious to rid themselves of the stain of last season's awful 68-point record.

Babcock's practices have been incredibly brisk and, for many players, difficult to follow, as the coach doesn't pause often for explanations. On Thursday, the team skated for fewer than 40 minutes, as Babcock hopes they learn to work not only hard but fast on off days as well.

"You just go to the back of the line and make sure someone that knows what they're doing goes first," Holland joked of the confusion during drills.

"I don't like to waste people's time," Babcock explained. "I think you come in here, you do everything fast, and you go home in a hurry. To me, the higher intensity you get them to go, the better off you are."

But the Leafs haven't found their new coach to be some sort of automaton taskmaster. There's been a soft touch there, too, something that has motivated them to try to win one for the skipper against the Wings.

"He's really positive with the guys," Holland said. "He does do a lot of teaching, but he's the first guy to pat you on the back when you do something right."

"Guys are really on board with everything he's saying," goaltender Jonathan Bernier said. 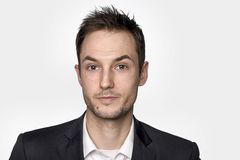 Mirtle: Why the Maple Leafs won’t be a disaster this season
October 6, 2015 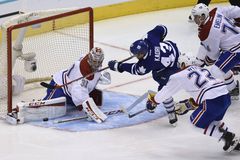