It's not a word you want to hear someone who leads your organization – any organization – repeat again and again when tasked with explaining what went wrong.

But at some point during the Toronto Maple Leafs three-wins-in-16 games tailspin that ended their season, "mind-boggling" became coach Randy Carlyle's go-to slogan, the descriptor for his mindset when it came to all the foibles his team couldn't overcome.

One day their lack of effort was mind-boggling.

The next it was their unpreparedness. Or execution.

Or any other number of other things one wouldn't expect a veteran NHL coach to be boggled by.

On Thursday, with Carlyle granted a curious two-year contract extension and general manager Dave Nonis on hand to explain why, it was there again.

"It was mind-boggling to us," Carlyle said at one point of the Leafs woeful penalty kill, one of three times he referenced a boggled mind during the conference call. "We had pretty much the same personnel and we couldn't find a way to stop the opposition's power play on a regular rate. Those were the things that were confusing and mind-boggling to a coaching staff."

These were not particularly reassuring words for a fan base already on edge, one that has watched a handful of teams – including two that finished ahead of the Leafs – throw coaches overboard while Nonis stood behind his man.

And they should have been just as disquieting for those in charge, especially considering the penalty kill was an issue that cropped up some six months ago and remains – apparently – unsolved.

Given all that has gone on, the odd part was that Carlyle was even given the opportunity to offer the same puzzled responses and non-answers after a season that was filled with so many, a year where the Leafs finished as high as they did (23rd in the league) thanks mainly to star individual turns from netminder Jonathan Bernier and top scorer Phil Kessel.

What it speaks to, though, is the fact that Randy Carlyle the myth continues to overshadow Randy Carlyle the reality for Toronto's decision makers, even with new president Brendan Shanahan on board with a fresh set of eyes.

What Nonis and his staff continue to see (and love) in Carlyle is someone who thinks the game like them, who carries the weight of a 1,000-plus game playing career, a Stanley Cup as a coach in 2007 and a reputation as a tough, no-nonsense bench boss with a wealth of experience.

The main reasons a change wasn't made is they couldn't think of anyone better to take over.

All along, this is a group that has refused to believe Carlyle was the issue, despite the lopsided shot differentials, often bizarre personnel decisions and spats with individuals on the team – not to mention the dramatic improvement the group in Anaheim that's still playing hockey has made since he left those parts.

There will continue to be all kinds of justifications coming out from behind the scenes, but ultimately what Thursday really was was a doubling down on the belief that what ails this franchise has little to do with its old school head coach and can be fixed in other ways.

"If you've seen it being done before, with a lot of the same players, with that coach leading that group, you know it can happen," Nonis said of Carlyle turning things around, referencing the Leafs charmed half season in 2012-13 that seems a distant memory. "I know it has happened before. I know he has reached them before.

So, for the second off-season in a row, Carlyle will be given a remodelled roster, likely with additions that are viewed as Carlyle-type players, just as the two Daves – Bolland and Clarkson – were a year ago.

And he'll have an all-new army of assistants at his disposal, too, with Nonis careful to explain Carlyle will have a say there as part of a three-person panel that includes Shanahan.

This is a coach being given a voice and who will be set up to succeed, in other words, with the extra years on his deal all part of it.

But this is also a vote of confidence that will only go so far. If the Leafs continue to fail in the fall, it will be all but impossible to ignore Carlyle's fingerprints are on the results.

What's mind-boggling is that it will take that much for management to finally see it.

Carlyle’s extension sends message: this is no lame duck
May 8, 2014 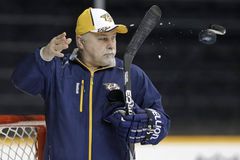 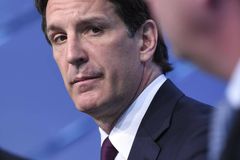