Update: The Class of 2015 has been announced. Story here.

Just being on the ice is what Nicklas Lidstrom cherished the most.

The seven Norris Trophies as the best defenceman of his era and four Stanley Cups as a cornerstone of the Detroit Red Wings make him a mortal lock to be elected to the Hockey Hall of Fame on Monday in his first year of eligibility.

But when Lidstrom looks back on his career, the 1,564 regular-season and 263 playoff games stand out.

"People are asking you how many games you played and how many you missed, and that's something I'm very proud of that I played in so many games," Lidstrom said in a phone interview from his home in Sweden. "I haven't missed many games."

Only five defencemen recorded more: Ray Bourque, Paul Coffey, Al MacInnis, Phil Housley and Larry Murphy. All but Housley are already enshrined in the Hall of Fame, and the American blue-line leader is another strong candidate.

Lidstrom never thought about the Hall of Fame when he was playing. He heard plenty of buzz last year when Peter Forsberg became the third Swedish player to be inducted and started considering it more then.

Lidstrom called the first Cup in 1997 very special, and the Red Wings won it again in 1998. When they won in 2002, Lidstrom became the first European player to capture the Conn Smythe Trophy as playoff MVP.

His final championship in 2008 brought more history, as Lidstrom became the first European captain to hoist the Stanley Cup.

The 2002 Red Wings hold a special place in Lidstrom's memory because of how stacked they were. Beyond Detroit's multiple-Cup core of Lidstrom, captain Steve Yzerman, Fedorov and Igor Larionov, that team had Hall of Famers Brendan Shanahan, Luc Robitaille, Brett Hull, Chris Chelios and Dominik Hasek.

Lidstrom will be the seventh player from that team to make the Hall, and Fedorov the eighth.

"It really shows what great of a team we had back in '02 and what Scotty (Bowman) could accomplish with a group like that," Lidstrom said. "And we played as a team when it mattered, too."

A lot of that was Lidstrom, the stable presence on the blue line who earned praise from former defenceman Sergei Zubov as "one of the greatest athletes" he played against.

As much as Lidstrom prided himself on his durability and consistency, Zubov appreciated when Lidstrom couldn't be noticed because he rarely did anything wrong.

Fedorov's induction, whether now in his first chance or down the road, feels inevitable. Pronger is a slam dunk even though he is still under an NHL contract because bylaws state that he's eligible since he played his final game three full seasons ago.

Canadian women's star Danielle Goyette could also get the call after being inducted into the International Ice Hockey Hall of Fame and Canada's Sports Hall of Fame. Goyette won Olympic gold twice in three appearances and world championship gold eight times in nine tries, putting up 113 goals and 105 assists in 171 international games.

The late Pat Quinn is a candidate in the builder category after coaching two teams to the Cup final and Canada to Olympic gold in 2002 and world junior gold in 2009. When Quinn was posthumously named to the 2015 class of the Order of Hockey Canada, president and CEO Tom Renney made a case for Quinn, who also served as the Hockey Hall of Fame chairman.

"He gets us a gold medal in the Olympic games, he wins a gold medal with the world junior team," Renney said in February. "He puts all kinds of people in a safe place in the NHL and made stars out of a number of others as a coach, never mind as an administrator." 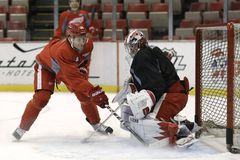 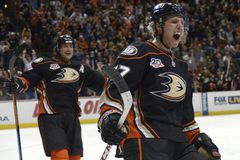