Two weeks ago, Gary Roberts was down for the count. The diagnosis: Pneumonia. It didn't look good for his participation in the Heritage Classic - alumni division, set for Saturday, a day before the main event, featuring the Calgary Flames and the Montreal Canadiens. But Roberts wanted to be here so badly because, well, because he'd won only one Stanley Cup in a distinguished a 20-year career; and it came against the Habs, the only time Montreal lost a Stanley Cup on home ice. The chance to dress again, in a reunion of that 1989 team, beside his friend Joe Nieuwendyk, just down from Al MacInnis and across from Jamie Macoun and Ric Nattress - that was too much to pass up. So there was Roberts, his voice hoarse, but planning to play - even in the cold, even at altitude, even though his asthma could act up.

"You think you're going to have so many chances to win a Stanley Cup over your career, then you realize, you better enjoy the one you won. You never know?"

For some reason, much of the chatter in the dressing room, pre-game, focused on Sergei Makarov, one of the pioneering Russian players, who joined the Flames after they won the 1989 Stanley Cup and mostly played on a line with Roberts and Nieuwendyk. Makarov was signed to replace Hakan Loob, who returned to Sweden, after the Stanley Cup victory, and general manager Cliff Fletcher remembered being in coach Terry Crisp's office, in Makarov's first year, as the two kept trying - and not having much success - asking him to buy in to what Crisp was selling defensively.

According to Fletcher, Crisp was furiously diagramming a play on the board, showing Makarov where he wanted him to be on the ice. Makarov took the chalk away from Crisp and crossed everything out and started diagramming his own plays, just as furiously. Finally, Makarov paused, turned to Crisp and said: "Tikhonov. Bad guy. Good coach. You? Good guy. Bad coach."

Crisp laughed as Fletcher told the story; confirmed that it happened; and then told one of his own - about a time when they were playing Edmonton and had them on the run. So John Muckler, the coach, called a time out and Makarov turned to Crisp, nodded and said: "Yes, good timeout. Good move." Then he pointed to Muckler and said: "He good coach. You? No."

Roberts was remembering how Makarov would just shake his head, whenever he didn't put a pass right on the tape of his stick.

Usually, it was. In fact, As Roberts approached 50 goals for the first time, largely because of Makarov's play-making, the Russian asked him - a la Rumpelstilskin - what would he do for him if he helped him get to that plateau? Roberts promised to name his next born child after Makarov. When Roberts got there, and was asked about it, the answer was: "Guess we're not going to have any more kids."

Centre Joel Otto was teasing goaltender Mike Vernon about his lack of conditioning. Vernon hadn't played in nine years before he went out for a practice last week. "Literally, I thought he was going to need medical attention," said Otto. "He was better the next day." Vernon was laughing about that: and if he struggled today and got booed? "Nothing new for me," he said, with a shrug. 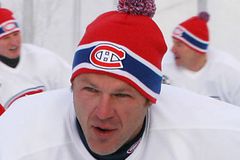 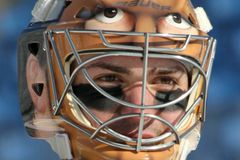 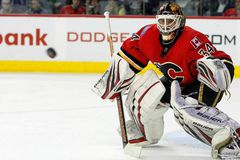 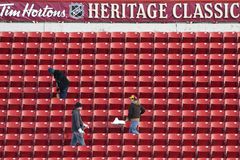 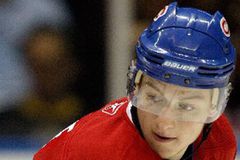