The Toronto Maple Leafs had one last cut to make, and at first glance at Monday's practice, it was easy to spot who it was.

Stéphane Robidas, the 38-year-old defenceman with a long recent injury history, wasn't on the ice. He didn't even have a stall in the dressing room.

With two years left on his contract at $3-million a season, he was a ghost with the regular-season opener two days away.

Officially, Robidas is injured – despite not missing any time in training camp or preseason.

Unofficially, the Leafs aren't certain what to do with him.

His situation isn't unique. The NHL's waiver wire has been filled with bloated, unwanted deals in recent days, with none uglier than the Philadelphia Flyers' six-year, $30-million contract (U.S.) on defenceman Andy MacDonald.

MacDonald will make $4.5-million to play in the AHL this season, joining Nikita Nikitin ($4.5-million), Colin Greening ($2.75-million), Ben Scrivens ($2.3-million) and Max Talbot ($1-million) in the group of veterans beat out in camp by younger players and demoted to the minors despite their high cap hits.

It's a reflection of how cutthroat the league is becoming that past mistakes, no matter how costly, are so readily sent to the minors – especially when you consider there are little cap savings.

Under the NHL's previous collective bargaining agreement, NHL general managers facing huge contractual blunders could effectively hide them in the minors. Wade Redden, Sheldon Souray and Jeff Finger all had their deals wiped from the cap in that fashion.

Under the new agreement adopted in 2012, the cap savings for demoting someone like MacDonald are a max of $950,000, meaning the Flyers will have almost 6 per cent of their cap dedicated to thin air.

"I think he was shocked," Flyers GM Ron Hextall said of MacDonald's reaction to the demotion.

Add in other mistakes such as Vinny Lecavalier ($4.5-million cap hit) and Luke Schenn ($3.6-million) and the Flyers are in very tough contractually before the season even starts.

What makes Robidas different is the Leafs are still reluctant to send him to the minors. Toronto has effectively converted the Marlies into a youth-only group, with hardly anyone on the roster over 25 years old, never mind 38. The organization wants the AHL team to be a development factory, with young players getting the bulk of the ice time and experience. Robidas would take away from that if he were given a regular spot on the blueline.

So this opportune injury will now allow the Leafs some time to sort through their options. Robidas can be placed on injured reserve long enough for rookie Scott Harrington to get a look in his first games since arriving via the Phil Kessel trade with Pittsburgh. The Leafs can also explore the possibility of moving Robidas, perhaps by retaining half of his salary. Even then, they're likely in tough to find a taker. The NHL as a whole is getting younger and faster, with players right out of junior on cheap entry-level deals offered more of a chance than ever. Combine that with a salary cap that has been stalled by the sinking Canadian dollar, and there's immense pressure on salaries for veterans. That's why there have been so many on camp tryouts and – when they're lucky – signing bargain basement contracts, such as the $700,000, two-way deal Scottie Upshall landed with the Blues on Monday.

Robidas has had a fine career, but the harsh reality is the only thing him keeping him on a roster right now is his contract.

Editor's note: An earlier version of this story referred to Scott Gomez instead of Shelson Souray. This version has been corrected. 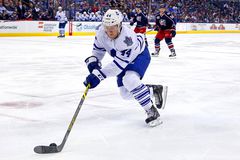 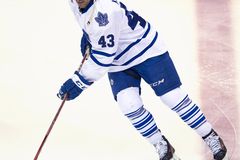