Twenty years from now, if and when the 2016 World Cup of Hockey is remembered, it will be for this game.

It will be remembered for the typically staid NHL going off message and inventing two teams, including one of 23-and-under players from Canada and the United States, to play against national teams – an idea considered ridiculous by most when it was announced a year ago.

Until they began to play.

Team North America might be done at the World Cup. Even though it thumped Finland and lost by a goal to Russia. Even though, on Wednesday night, it added an overtime thriller, piling up breakaways and end-to-end rushes and dekes on Sweden – a defensive powerhouse – in a 4-3 win.

The North Americans terrified the second-best hockey team in the world from the opening faceoff, with an Auston Matthews goal 30 seconds in, a Johnny Gaudreau penalty shot 26 seconds later and a 2-0 goal by Vincent Trocheck only 39 seconds after that.

It was a minute-and-a-half of hockey that terrified, among others, Erik Karlsson, winner of two of the past five Norris trophies.

"It was going to be a disaster," Karlsson said, after using an (English) expletive to explain the mood on the bench in those opening minutes. "It's hard [to adjust to that]. They gave us a slap in the face right away. We had two options – either we fold and let them win or we start over."

"It could have been more, definitely at the start," teammate Filip Forsberg said of the Swedes' deficit, which they held to two goals solely thanks to the nonpareil play of goaltender Henrik Lundqvist, who faced 49 shots, many of them point-blank.

It turned into a game the hockey world will be talking about for the rest of the event and, likely, for years.

In the end, the biggest shame of the format of this World Cup is it cut short Team North America too soon. Because it won in overtime, and Sweden picked up the loser point, the NHL's young guns will be eliminated if Russia beats Finland in its final round-robin game on Thursday.

The Finns are never pushovers, but they are winless and already out of the event, with little to play for. The chances we'll get to watch this version of the 23-and-under team play another game are slim.

Team North America's flash of brilliance – capped by Nathan MacKinnon's remarkable winner, with six different jukes with the puck alone in front of Lundqvist – may have been brief, but it also pushed to the forefront a discussion about what hockey is and what it can become.

Team USA started that conversation by bringing a team centred on grit and grinders, with a nonsensical coaching choice and bizarre roster selection. That team embodied an old way of doing things, of a different brand of hockey.

North America, however, is the face of what this game and this league might evolve into. It was Connor McDavid rocketing down the ice, passing the puck to himself beneath the giant wingspan of Victor Hedman, then nearly finding a hole in Lundqvist's armour. It was Gaudreau's incredible penchant for blasting past unsuspecting veteran defencemen and getting in alone with his marvellous hands.

It was the way Matthews can control the puck, even from his knees, as if it is attached by a string, wheeling in and out of legs and sticks until it's back on his blade, ready for a shot.

It was poetry, in as much as this sport rises to be.

There were no head shots or goonery. There were no punches thrown or cheap shots in the corners. There was no hockey-related revenue – although all those black-and-orange North America hats and jerseys in the rink likely generated quite a lot of it – or collective agreements.

"We don't have to worry about the cap with Team North America," coach Todd McLellan said.

In some ways, yes, this team was fantasyland, make-believe marketing from someone in a corner office who now deserves a raise. But it also embodied a lot of what many hockey fans have always wanted to see, which is the promotion of skill, above all else.

Historically, it hasn't happened enough – at the NHL level, or even in minor hockey – which is why smaller players such as Gaudreau haven't always been able to shine.

Perhaps now – with the NHL realizing what it has, and coaches seeing you can win and entertain with four lines that are all dangerous – that will become the pursuit for general managers around the league.

"As coaches, we took the reins off them," said McLellan, who admitted to standing on the bench and alternatively yelling "no" and "go" as the play seesawed back and forth in overtime. "You could say that. We've had a lot of work as a staff to try to hold them accountable for certain areas of the game, too … but we'll still play towards an identity, and that's speed coming back on loose pucks, as well. But they're fun to watch. They're fun to coach."

"I think we've definitely turned some heads and opened the eyes of everyone what the future of the NHL is like," McDavid said. "We're definitely excited about that."

We all should be.

Duhatschek: U.S. has some rethinking to do after Canada sends them packing
May 16, 2018 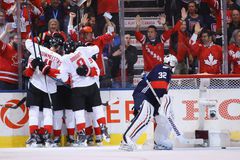 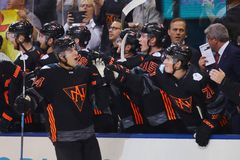 Team Europe ‘not done’ and ready to pull off more surprises at World Cup
May 16, 2018 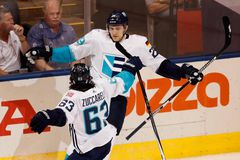