On the surface, it is an easy argument to make that the first World Cup of Hockey played in 12 years was not a business success.

There were lots of empty seats at the Air Canada Centre, not just for games between known tough sells such as Sweden and Finland but also for the two games of the final between Canada and Europe. Tickets for the final – as many as 2,741 at various prices less than four hours before the first game – could be had on the ticket reselling site StubHub for as little as $20. And there were dozens of tickets that were not previously sold available from Ticketmaster at the much higher face values (up to $513) for what was claimed as a sellout. Since Toronto is considered the largest and richest hockey market in the world, this had to be troubling to the organizers.

The kindest thing to say about the viewing party for Game 1 of the final on the big video screen at Maple Leaf Square, next to the ACC, was that attendance was sparse. So sparse that it was not a shock when the tournament organizers, the NHL and the NHL Players' Association, cancelled the party for Game 2 on Thursday because of "inclement weather."

While the estimated profit from the 15-day tournament – about $60-million in mixed Canadian and U.S. dollars in the best guess of those with knowledge of the finances – looks impressive at first glance, the number of ways it has to be split quickly waters it down. The profit is split 50-50 between the league and the players' union.

Even the organizers admitted that this World Cup was not a cash bonanza. NHL deputy commissioner Bill Daly said it was still a better financial deal for the league than the Olympic Games, but he added, "It's a relatively minor commercial opportunity."

The NHL's 50 per cent, $30-million, means that each of the 30 teams gets $1-million. But in accounting terms, since the plan is to hold the World Cup every four years, that $1-million should be annualized over that period, which reduces the profit to $250,000 a team. More than a few team owners would say that is not much incentive to risk a serious injury to superstars such as Sidney Crosby.

There was also bad news when it came to television. While the Canadian ratings were good, 3.1 million for the Canada-Russia semi-final game on CBC and Sportsnet, and 2.1 million for the first game of the final despite competition from the Toronto Blue Jays, it was a different story in the United States.

Because of the poor performance by Team USA, the best rating for ESPN was the 766,000 viewers who watched the Canada-U.S. round-robin game. European ratings were also low, although the time difference and tournament format, which saw Team Europe formed with players from several countries not in the event, were challenges.

That is a long list of disappointments, but only if you take the short view, in the opinion of the main organizers. Yes, the World Cup of Hockey has long been treated as a red-headed stepchild by both the NHL and the NHLPA (this was just the third one since 1996), but they both see this one as the jumping-off point for a new push to sell the game around the world.

"You look at the crowds. You look at the sponsor reaction. You look at the fact that [more than three million] people in Canada watched the game in either French or English [last] Saturday night," NHL commissioner Gary Bettman said. "You judge using that criteria and a little bit of intuitiveness about the buzz. You plan things and you see how they work.

"The plan was to re-establish the World Cup as a major event by doing it the way we're doing it in one place, since we hadn't been around for 12 years – and it accomplished all of our objectives.

"We're going to sit down with the players' association, when this is all over, take a deep breath, talk about what we think went really well and about what we could do differently and what we should do differently – and look at the opportunities and options. There's already been expressed to us, from lots of places, an interest in hosting this event. So we'll take it from there."

NHLPA executive director Don Fehr, an advocate of international competition as a marketing tool going back to his days as head of the Major League Baseball Players Association, was equally enthusiastic.

"I think you'd be pretty hard-pressed to find a tournament that was as competitive game by game as this one was or played at this kind of a high level with this kind of intensity," he said. "That bodes really well for the future. We have to harness that, we have to show it to people, explain it."

Both Bettman and Fehr said there will be at least one more World Cup in four years. The NHL and the players expect to work together to sell the game in markets outside of North America, especially in Asia. Fehr said the World Cup "will be an enormous part of it; it might be the centrepiece of it. It's going to grow."

As the accountants add up the numbers to discover the actual profit in the next few months, some of the things the league and the union plan to discuss are the format, scheduling and locations. At this point, the most likely change will be eliminating the two hybrid teams, Team North America and Team Europe, in favour of more national teams.

Ideally, there will be a long round of play-in games among more countries than the usual six hockey powers leading up to the next World Cup. And there are hopes of selling the tournament to the highest bidder among a large group of prospective host cities.

Where the Olympics fits in is not known. At present, negotiations between the NHL and the International Olympic Committee and the International Ice Hockey Federation for the league's participation in the 2018 Olympics in Pyeongchang, South Korea, are not going well. The sticking point is the IOC's reluctance to continue paying the insurance on the players' contracts as well as their travel and accommodation.

Daly was particularly pessimistic. He said he was doubtful that an agreement could be reached, although it must be remembered that Daly and Bettman are in negotiating mode with the IOC. Daly said a decision is needed in the next few months, but there is no set deadline.

The NHL may not be as hard-line with the IOC as it appears, since both the Pyeongchang Olympics and the 2022 Games in Beijing are in the league's target market of Asia. The league is particularly interested in gains in China, which is showing signs of interest in hockey.

In the meantime, the work of dividing the profits of this year's World Cup will continue. At this point, there is no definitive information on the finances, although the organizers expected around $100-million in revenue with a chance of that rising to $120-million. But the expenses were high, as the tournament had to pay the entire cost of the Europe and North America teams as well as the travel, accommodation and training-camp costs of all eight teams.

The single biggest contributor to the tournament was Rogers Communications Inc., which paid $30-million for the Canadian television rights. Sources in the advertising community say Rogers did not sell out the advertising inventory for the Sportsnet and CBC networks, but it sold enough to turn a modest profit. ESPN paid around $5-million (U.S.) for the American rights, while the European and other international rights went for considerably less, perhaps a total of $2-million.

Sponsor sales went well, with about nine corporations, including Samsung, Pepsi and Canadian Tire, paying an estimated average of $3-million each to be the major sponsors. Merchandise sales have yet to be tallied, but at least $2-million is expected.

Neither the league nor the union would say what the ticket sales were, but hockey fans did not snap up every ticket. The problem, aside from the unusual tournament format, was the outsized expectations of what people in the world's top hockey market would pay. At first, tickets were sold only in packages for hundreds of dollars per game and it was only when sales were slow that single games went on the market. However, it appears the tournament could hit about $30-million in sales.

For the players, a straight division of their $30-million share of the profit among the 720 members of the NHLPA represents $41,667 per man. Not bad for a month of work during the off-season, including training camp and the tournament, especially if you are one of the majority of NHL players who were not picked to play on one of the eight teams.

However, the players are in the midst of a debate over how to split their share. Many of those who played in the tournament say they should get most of the money. While this may have the potential for hard feelings, Fehr called it a "healthy discussion."

Since the actual profit will not be known for at least a couple of months, the players have time to make a collective decision. "If the question is, 'Am I concerned about it?' the answer is no," Fehr said.

What the much-maligned World Cup of Hockey got right and wrong
September 30, 2016 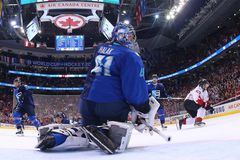 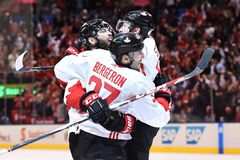 The World Cup of Hockey’s biggest flaw? Canada is too good
September 28, 2016 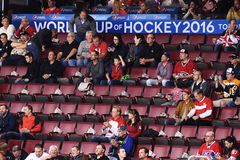