It is probably not a surprise that the Oilers would have a letdown. They had won four straight playoff games since that 7-0 stinker in Game 4 of the first round in San Jose.

They were underwhelming again on Sunday night at Rogers Place, falling into a 3-0 deficit to the Ducks in the first period before dropping a 6-3 decision that relieves pressure on Anaheim.

The Ducks were in danger of falling behind 3-0 in the second-round series but can even it by winning Game 4 in Edmonton on Wednesday night. Game 5 will be back at the Honda Center on Friday.

"It is better to be up 3-0 but ultimately (the Ducks) are a great team," Connor McDavid, the Oilers captain, said. "It is a long series and we are still in a decent spot."

Edmonton made it interesting by scoring three straight goals to tie the game in the second period. The last was a wicked wrist shot by McDavid. A second before, the 20-year-old had reversed direction suddenly to shed his defender and make room for himself to take the shot.

Chris Wagner answered less than a minute later, firing from a bad angle on one side of the net. It trickled past Cam Talbot, the first easy one the Oilers goalie has allowed in nine postseason games. The Ducks added two more in the third period to pull away – Jakob Silfverberg's second goal of the night and one by Ryan Kesler.

"We came out flat," Patrick Maroon said. "I don't think the opportunity for us is lost. We are still up 2-1.

"We have to learn from our first period, and take Game 4 on. I think we are in a good position."

The Oilers played marginally better than in a 2-1 victory in Anaheim on Friday night. They outshot the Ducks 28-27, and outhit them 47-39. But after tying it up, they let it get away.

"The hole at the start was too big to come back from," Mark Letestu, the Edmonton centre, said. "We have couple days between the next game and will be able to refocus.

"My expectation is that we will bounce back like we have all year."

Right from the beginning, it looked like the Ducks were finally solving Talbot, who had 39 saves in Friday night's 2-1 victory and had stopped 75 of 79 shots in the first two games. He ended up allowing all six goals.

"For all the good work Cam has done for us this year, we have to pick one up for him," Letestu said.

It took Anaheim only 25 seconds to take the lead on a breakaway by Rickard Rakell, the fastest postseason goal in franchise history. Silfverberg put them up 2-0 five minutes later on only their second shot. When Ryan Getzlaf added a third goal with 9:19 left before the first intermission, the game was threatening to get out of hand. Then Maroon deflected a deflection by Ryan Nugent-Hopkins with 39 seconds left to start the Oilers on the way to a comeback.

Anton Slepyshev was credited with a goal when a puck bounced off defenceman Shea Theodore in a scrum in front of the net to trim the margin to 3-2 1:28 into the second period. Then McDavid scored for the third time in the playoffs and it seemed that the Oilers were about to escape.

It wasn't to be for a lot of reasons – a leaky defence and subpar goaltending among them.

The game was out of character for the normally solid Talbot.

Two of the three candidates for the Vezina Trophy – Montreal's Carey Price and Sergei Bobrovsky of Columbus – are on teams already eliminated from postseason. The third – Braden Holtby of Washington – was pulled in the second period on Saturday.

Talbot led the NHL in games and saves during the regular season and tied for the most wins. He didn't have that sort of magic on Sunday night.

Talbot spent two seasons with the Rangers as the backup to Swedish star Henrik Lundqvist before being acquired by the Oilers in June of 2015 for three draft picks.

Earlier in the day, Talbot had said the Oilers would do everything possible to keep from giving Anaheim new life. The opposite happened. The door is now open for the Ducks, who will spend the next two days 900 kilometres away in Kelowna, B.C.

They were wary about staying in Edmonton and having to cope with the Oilers' ardent supporters.

About 1,000 Edmonton fans made the 2,800-kilometer trip to Anaheim to take in the first two games. They raised a ruckus in Honda Center, and chanted in bars and restaurants late into the night as they celebrated two somewhat unexpected victories.

The Oilers received a wild welcome back on Sunday. Nearly everyone dressed in orange, and at times the clamour raised was ear-splitting. The whole city is swept up in the excitement, including Don Iveson, the Edmonton mayor.

He was five years old when he accompanied his dad to the Oilers' first Stanley Cup parade in 1984. He was nine when he saw his first game live – the night of Oct. 25, 1988, when Wayne Gretzky returned to Edmonton for the first time following his trade to Los Angeles.

"I got to see the Oilers win, but I had really conflicted emotions," Iveson, 37, said. "Now Gretzky is back and everything is the way it should be. The battle lines are clear."

Iveson is in his 16th day of growing a playoff beard. He decided to grow one as a means of coping with the Oilers' loss to San Jose in the first game of their first playoff series since 2006.

The mayor had one when the team went on its last previous postseason run, but had to shave it off. He got married on June 17, 2006, the day the Oilers defeated Carolina to extend the Stanley Cup finals to seven games.

"I am hoping to look like a mountain man by sometime in June this year," Iveson said. "I have some added testosterone as a result of this whole playoff experience.

"The growth potential of this team reminds me of the last dynasty. The excitement is anticipatory for not only what might happen now, but in future years.

"It is a good time to be Edmonton mayor. Nobody even noticed when it snowed last week."

The Oilers gave one of the two games back that they won in Anaheim, but can take a commanding lead with a victory at home on Wednesday.

"Ours is a good team that never gives up," Maroon said. "We have proved it all year."

Oil King​: Joey Moss, Wayne Gretzky and the most remarkable relationship in all of sports
April 28, 2017 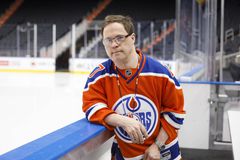 How top-line forward Patrick Maroon found his home with the Oilers
April 25, 2017
In Edmonton, winning changes everything
April 23, 2017
Follow us on Twitter @globeandmail Opens in a new window
Report an error Editorial code of conduct
Due to technical reasons, we have temporarily removed commenting from our articles. We hope to have this fixed soon. Thank you for your patience. If you are looking to give feedback on our new site, please send it along to feedback@globeandmail.com. If you want to write a letter to the editor, please forward to letters@globeandmail.com.
Comments