Pekka Rinne didn't want to take all the credit after stopping all 32 shots he faced on Saturday.

The veteran goaltender praised his teammates and the goal posts behind him following a 2-0 win for his Nashville Predators over the Calgary Flames at the Scotiabank Saddledome.

"I got a lot of help," said Rinne, who recorded his third shutout of the season and the 46th of his NHL career.

"(The Flames) have a lot of skill up front and they were able to get a couple good looks. Early on I gave a couple bad rebounds and guys were there to bail me out. I got some help from the crossbar too. That was like four times, I think."

It was also the second straight shutout for the Predators, who got a 46-save performance from Juuse Saros in a 4-0 win two nights earlier in Edmonton against the Oilers.

"We love both guys," said Nashville forward Filip Forsberg. "It's so much fun to play in front of them, too. You do everything you can to help them out because you know how much they do for you."

Ryan Johansen and Kevin Fiala scored for the Predators (21-7-4). They have recorded points in seven straight games (6-0-1).

"We're just finding ways," said Turris, who had an assist on Fiala's goal as both players extended their point-scoring streaks to seven games. "Pekka played well and we were able to find a couple to put us up and just kind of shut it down from there."

The Flames outshot the Predators 12-6 in the first period, while defencemen Mark Giordano and TJ Brodie both rang shots off the crossbar.

"We had a lot of looks tonight," Giordano said. "They're a good team. Obviously they are one of the best in the league coming in, but I thought we played well. For whatever reason the puck didn't go in tonight."

Just past the 10-minute mark of the second period, Calgary's Garnet Hathaway was levelled by a blindside hit by Nashville's Austin Watson, who subsequently dropped the gloves to fight Troy Brouwer. While Watson was assessed a game misconduct and a five-minute major for interference, Brouwer took an instigator penalty for starting the fight.

During the ensuing 4-on-4 situation, Johansen swatted his own rebound past Smith to give the Predators a 1-0 lead at 11:17.

The Flames then had an extended 5-on-3 man advantage for 1:48, but all they were able to generate was three shots from the outside by Giordano.

"It's going through a tough stretch," Flames coach Glen Gulutzan said about Calgary's power play that has gone 0 for 19 over the past five games. "It gets exacerbated by the 5-on-3 for a full two minutes. You don't get many of those in the league. We only had three or four last year in the entire season. You get a two-minute one, you've got to capitalize and we didn't. We had some looks."

Rinne made another great save with 2:15 to play in the second to deny a point-blank shot by Jaromir Jagr, who was set up nicely in front by Johnny Gaudreau.

Fiala extended Nashville's lead to 2-0 at 19:22 when he re-directed a pass from Kyle Turris through Smith's legs.

The Flames pressed hard to get on the board in the third period and came close a couple times. Micheal Ferland re-directed a shot by Sean Monahan off the crossbar during a Calgary power play before Jagr rang a shot off the post a short time later. 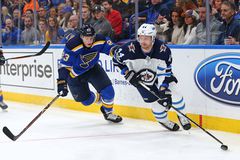 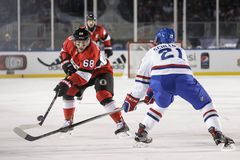 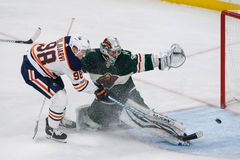