As much as the move was talked about, extensively rumoured, and considered a formality for about six months, Rick Nash didn't know much about New York City, in all of its oddball glory, until he was actually traded there and started living in the Big Apple.

Laymen view it as part Woody Allen movie and part Lou Reed song. The reality is something far different – less rather than more, and quieter than you think.

"You're not in the tourist areas – which I didn't know," Nash explained, during a visit at Rangers training camp in the Rocky Mountains. "Before I went there, I thought I was going to live in Times Square – and walk out the door and there are millions of people there. It's totally the opposite. It's a lot more chill. You're in the different areas that feel like neighbourhoods, but still you get the amazing restaurants, the shows, whatever it might be.

New York embraced Nash, too – although it was a complicated transition, given Nash arrived in town for NHL training camp and soon realized a lockout was on again. So he did what he did in 2005-06, and immediately decamped for Davos, Switzerland, where he again had a chance to play with Joe Thornton, an old friend.

Then, January rolled around, the lockout came to an end, and the 2013 NHL season started virtually on a dime – with no exhibitions, none of the usual preparations. All of which was fine for anyone who'd been a Rangers holdover, but Nash was trying to learn former head coach John Tortorella's system and the John Tortorella way of doing things on the fly.

It went okay for the most part. He scored 42 points in 44 games, just behind Derek Stepan for the team lead, but Nash is anxious to start the season right this time – with a proper training camp and chance to play a full 82-game schedule with his new team.

Hockey players are like everyone else, creatures of habit. And this preparation – a few days in the mountains followed a road trip through Western Canada and an exhibition game in Las Vegas – is just more … normal.

"Definitely," said Nash, a 29-year-old winger entering his 11th NHL season. "It was a weird situation last year – going in for a couple of weeks and then leaving for Switzerland and coming back and then jumping right back in to a mini-training camp, no exhibition games.

"This year, it just feels as if there's more time to jell and more time to get to know the players and the systems and just understand everything a little better."

Except for Ryan Clowe, who finished the year in New York but was limited to 12 games because of injuries, the Rangers return more or less the same team this September. That includes two of Nash's former Columbus Blue Jackets teammates, Derick Brassard and Derek Dorsett, who are pencilled in as regulars – Brassard starting with Benoît Pouliot and Mats Zuccarello; Dorsett with Taylor Pyatt and Dominic Moore.

"Chemistry's a big thing in this league and this I think really helps us," said Ryan Callahan, the Rangers captain. "We went to Europe a couple of years ago, and I thought that really brought the group together – and this [trip to the Rockies] is kind of like that."

But while the nucleus remains the same, the coaching staff is new – with Alain Vigneault taking over from Tortorella.

For Nash, adjusting to a new coach is second nature. In his nine seasons with Columbus, he went through eight of them (Dave King, Doug MacLean, Gerard Gallant, Gary Agnew, Ken Hitchcock, Claude Noel, Scott Arniel and Todd Richards). Arniel is on Vigneault's revamped Rangers staff, along with – among others – former NHL blueliner Ulf Samuelsson.

Even though Nash hadn't crossed paths off-ice with Vigneault before, he remembers from his Columbus days how Vigneault's Vancouver Canucks teams "were always well-prepared, good offensively and sound defensively. So I think it'll be fun to play for him.

"It seems like he's given every one a new opportunity, which I think is fair. He's not judging anyone on their past. I think that's important – for everyone to take full advantage of the opportunity." 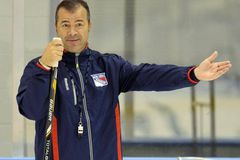