The start of the NHL playoffs next week will likely bring a significant change for television viewers. For the first time in 28 years, Ron MacLean is not scheduled to be in a host's chair for any of the first-round series. MacLean will only be seen in his role as Don Cherry's sidekick on Coach's Corner, although the plan is to have the popular duo on the air almost every night.

When Rogers Communications Inc. wrested the Canadian national broadcast rights away from the CBC and TSN before this season, MacLean was replaced as the main Hockey Night In Canada host by George Stroumboulopoulos. MacLean retained his role with Cherry, but his host duties were confined to Rogers Hometown Hockey broadcasts on Sunday nights on the Sportsnet and City networks. Hometown Hockey wrapped for the season last Sunday.

Rogers broadcast staff has not been told formally what the plans are for the playoffs, but MacLean said he does not expect to be doing anything other than Coach's Corner despite the fact Rogers will be showing all eight first-round series on CBC and on its own various networks. And that's fine with MacLean.

"Oh, I'm happy," he said Monday. "I think it will be good for Grapes [Cherry] to do Coach's Corner every night."

However, Canadian viewers may not be happy seeing MacLean in a reduced role as a host. Last November, an Angus Reid poll found that 74 per cent of 1,504 respondents felt MacLean's lesser role on HNIC hurt the show's brand.

Neither Scott Moore, president of Sportsnet and NHL properties at Rogers, who was away on vacation, nor Gord Cutler, Rogers' senior vice-president of hockey production, could be reached for comment. A Sportsnet spokeswoman wrote in an e-mail message that Rogers will announce its playoff coverage plans on April 12.

At this point, it looks like Stroumboulopoulos will be the host for most of the broadcasts, in particular the bigger series involving Canadian teams on HNIC. Also stepping in will be Daren Millard, who is the host of Wednesday night regular-season NHL games, and probably Jeff Marek.

MacLean said nothing is set in stone yet with Coach's Corner, since the NHL playoff matchups have yet to be determined, but he expects to be on the air with Cherry just about every night. They certainly will be on whenever a Canadian team is playing.

During the regular season, Coach's Corner is live during the first intermission of the first game on Saturday nights and then is shown on tape delay as the next games come up. But during the playoffs, both MacLean and Cherry (as well as the viewers) want to see that night's games discussed as much as possible, which occasionally means going live on two different games.

MacLean said Cherry will like working most nights, unlike the playoff practice when the CBC produced HNIC, when Cherry worked every second night. But MacLean jokingly suggested Cherry will not be keen about restrictions on his camera time, a constant issue in the first season under Rogers.

"The good part is Don will be involved, and the bad part is 'Hey, Don, keep it to two minutes, we have to get over to the Calgary series,' " MacLean said.

With Rogers broadcasting eight first-round series, Stroumboulopoulos will be carrying a heavy load. While the expected decision to not bring in MacLean to host some playoffs series seems curious, it may be designed to lessen the pressure on Stroumboulopoulos.

During his first season as the main host, Stroumboulopoulos showed himself to be a polished broadcaster. But it was evident he is not as well-versed in hockey minutiae as MacLean, who eats and sleeps the sport. And this, combined with MacLean's formidable skill and popularity as a host, might spark unkind comparisons in the minds of viewers if the pair were to appear on alternating broadcasts.

Mirtle: When it comes to the Kings, standings can lie
April 6, 2015
Habs win over Panthers may be costly as Pacioretty leaves with injury
April 5, 2015 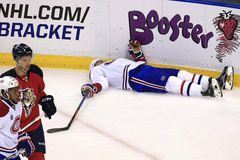 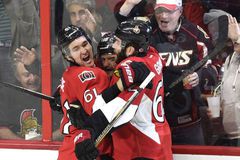