After penalties cost Canada a shootout to the rival United States – again – head coach Dominique Ducharme didn't mince words about discipline and if it would be a factor for his team going forward at the world junior hockey championship.

"It won't be. It won't be. I can guarantee you that, that's for sure," said Ducharme before striding off stage and ending his post-game news conference.

Kieffer Bellows and Brady Tkachuk scored in the shootout as the U.S. beat Canada 4-3 on Friday in the first outdoor game in tournament history.

Scott Perunovich and Tkachuk scored in the third as the Americans (2-1) rallied from a two-goal deficit, just as they did in last year's gold-medal game which the U.S. also won in a shootout. Bellows had a second-period goal with Casey Mittelstadt earning three assists.

Canada had built a seemingly unassailable 2-0 lead with five minutes remaining in the second period. As snow blanketed the 44,592 in attendance at New Era Field, it also slowed down the pace of the game as players struggled to see the puck, let alone control it as it skittered across the ice.

The tough playing conditions could have been beneficial with a solid lead, but Canadian forwards Brett Howden and Alex Formenton took penalties at the same time, giving the United States an important two-man advantage. For the first minute of the power play the Americans couldn't get anything going, with the puck slowing down in the snow, allowing Canadian defenders to get back into position.

But Bellows solved the problem of the snow breaking up passes by blasting a slapshot from the point that Canadian goalie Carter Hart, screened by his teammates, couldn't see.

"We had control of the game," said Ducharme. "We put them back into the game with bad penalties."

Although Boris Katchouk replied with a quick goal to give Canada a 3-1 lead 1:12 later, the momentum had shifted to the United States headed into the third period.

"I think with anyone overcoming two-goal deficits it's just never give up," said Bellows. "You've got to have resiliency in that locker-room. Everyone's got to believe in one another. It doesn't matter who you're playing, just keep battling and keep fighting."

Maxime Comtois took a boarding penalty nearly five minutes into the third and, again, put Canada down a man. When the Canadians did break up the American attack, they opted to counterattack instead of simply running out the clock. It was a costly mistake.

"We're killing that two-minute penalty early in the third period, there's about two inches of snow on the ice and it's a two-on-two and we're trying to go score," said Ducharme. "Turnover, comes back, and they score."

Perunovich worked a give-and-go play with Mittelstadt to cut Canada's lead to 3-2 on that power play. Hart's lateral movement seemed to be slowed by the snow and Canada's defence was out of position, allowing Mittelstadt to find Perunovich in the slot.

Mittelstadt set up another goal less than a minute later to tie it 3-3 and eventually force the extra period. He stripped defenceman Kale Clague of the puck near the endboards, then fed Tkachuk, who saluted the crowd before pounding both fists on the boards to celebrate.

Five minutes of three-on-three overtime settled nothing, with the game going to a shootout. Sam Steel, Taylor Raddysh and Drake Batherson couldn't score for Canada, while Bellows and Tkachuk put the puck past Hart.

A light snowfall began during the national anthems but became more intense during the second period and didn't relent until the shootout.

Shovels and wheelbarrows came out every TV timeout or other lengthy stoppage of play to try to clear the ice, but it was hard for maintenance crews to keep up. Leafblowers were used to clear the snow off of the signage of the host organizations – the Bills, the International Ice Hockey Federation, USA Hockey and New Era Field – on the turf outside of the rink area.

Hart, who made 32 saves, acknowledged that as snow piled up between timeouts it made it more difficult for him and his teammates to see the puck.

"When the snow gets pretty thick there and there isn't a shovel there for a while, then it starts to build up and you can't really see the puck very well," said Hart. "But it's always nice when we got the clears. It's quite a big difference when there's snow and there's not."

Canada faces Denmark on Saturday, with a win insuring that they will win Group A and earn an advantageous seeding in the quarterfinals that start Tuesday.

"It's a short-term competition," said Dube. "We have to be ready to go tomorrow that's the biggest thing is forget about stuff that happened. All we can do is build off it from now. It's a huge game for us tomorrow to lock up first place."

Friday's game set a new attendance record at a world junior hockey championship. The previous record was 20,380, when Canada faced Sweden in the gold-medal game in Ottawa on Jan. 5, 2009. 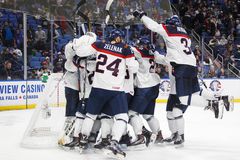 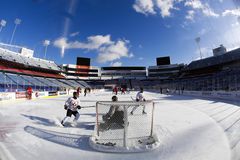