The world junior hockey tournament is aiming for new heights in 2015.

After starting out in smaller Canadian cities such as Saskatoon (1991) and Red Deer (1995) in the early days of holding it in this country, junior hockey's top tournament is expected to break attendance and revenue records in 2015 and 2017 with Toronto and Montreal set to be cohosts of the event.

Given the tournament's success in Canada in recent years, this was the obvious next step, with both NHL teams fully onboard and two massive venues available to take aim at yet another high-water mark.

The two cities will split the round-robin portion of the tournament in both years, but Toronto will play host to the medal round in 2015 and Montreal will then get it two years later.

"We're taking this to a whole new level," Hockey Canada president Bob Nicholson said on Thursday in the first of two news conferences in the two cities. "When we started discussions with the Canadiens and Maple Leafs, we knew this was the direction we wanted to go."

The buildup for Hockey Canada being able to strut confidently into Canada's two largest cities has been a relatively steady one.

Both cities had been bidding on the tournament for at least seven or eight years, with Montreal not having been host since the first "unofficial" event in 1978 and Toronto never having the honour.

The thinking even a decade ago was that the tournament could potentially get lost in a bigger centre not known for its love of junior hockey, especially during the NHL season.

Those fears, however, have been put to rest with increasingly success in other NHL cities.

"This is different," said former NHL player Jason Allison, a Toronto native who starred for Canada at the 1994 and 1995 tournaments. "The world juniors is huge. And it will be supported because it's the world juniors. It's special to people here and that's not going to change. I think it'll be the biggest stage ever for it."

The first big step to this point came in 2006, when Vancouver became the first large Canadian city to show it could be done, setting the early games between European teams in Kelowna and Kamloops and allowing Team Canada to fill GM Place throughout.

In the end, a record was shattered with more than 325,000 in attendance, surpassing the previous mark by more than 80,000 and setting a bar for the event.

Then came Ottawa in 2009 and another record with 453,000 fans, followed by Saskatoon/Regina in 2010 as dual-city bids became the norm as the tournament sought bigger venues for even the secondary games.

Calgary/Edmonton came just two years later and was another incredible success, filling two NHL buildings for the first time with ticket sales in excess of 570,000.

It was clearly ready for the next step, which involves an unheard-of partnership between rivals in the Toronto Maple Leafs and Montreal Canadiens.

"Anytime you see the Canadiens and Leafs come together in peace, it's a unique opportunity," said Tim Leiweke, the new president of Maple Leafs Sports and Entertainment Ltd., who attended Thursday's news conference with Montreal Canadiens president Geoff Molson.

"The two organizations were very aggressive. [MLSE executive] Tom Anselmi and his group were very good at chasing this hard and we got a lot of support from the city and the province. This was a unique moment."

Where the tournament is held beyond 2017 will be interesting to watch, too, as Hockey Canada has been awarded the world juniors for 2019 and 2021.

That means that the event will ultimately have been held in Canada seven times in a 13-year span, mainly thanks to the massive revenues pulled in for both Hockey Canada and the International Ice Hockey Federation each time.

In addition to the Montreal/Toronto partnership, Hockey Canada also announced on Thursday that TSN and RDS had extended their rights with a new 10-year agreement to broadcast the world juniors until 2024.

TSN has played a large role in helping the event grow, with TV ratings more than tripling since 1995. The 2011 tournament in Buffalo drew an average of more than two million viewers a game and more than six million for the gold-medal final. 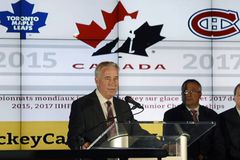