From your seat in the family room, or at work if you are among the increasing numbers of those sneaking a peek online, NHL trade-deadline day looks easy, even on the slowest day in years.

TSN host James Duthie smoothly opens the show at 8 a.m. Monday, introducing the analysts on the panel to his left – Martin Biron, Ray Ferraro and Jeff O'Neill. They are supplemented by other panels spread around the large studio at TSN's headquarters in the Toronto suburb of Scarborough. All of the regulars – Gino Reda, Darren Dreger, Pierre LeBrun and Bob McKenzie – are there.

Then there is the large group of TSN personalities: every recognizable face from the network seems to be standing in the wings, along with beat reporters from other outlets hired just for the day. Rotating them through the panel beside Duthie will keep the conversation fresh.

"I'm like the seat-fillers at the Oscars," says veteran Ottawa Sun hockey writer Bruce Garrioch with a laugh. "When someone has to go to the bathroom or get an award, they move me in."

What makes the ensuing 10 hours of live television look easy, even when hours pass before the first trade of the day, is the work of an even larger group of TSN staffers sitting at desks in the darkness at the edge of the studio. About two dozen people gather the background information on trade targets and traded players, think of potential questions for the host to ask and work the telephones to arrange interviews with players who have just been traded. Everything is funnelled to Duthie and the panels.

Information is shouted by the people at these desks at Duthie and the panelists during the commercial breaks.

There is quite a contrast between the muted frenzy around the desks and the forced calm of Duthie and the on-camera analysts.

While Duthie is at the wheel of the on-air ship, his equally important colleagues behind the scenes are senior managing editor for content Steve Dryden and floor director Ellen Pfeffer. Dryden is in charge of the information gathering, and Pfeffer directs traffic, which keeps her in motion constantly, talking on a headset, guiding incoming panelist to their places and discussing the next sequence of events with Duthie during commercial breaks.

Near the end of one break, Pfeffer starts her usual countdown: "One minute," she says loudly enough to be heard across the room, which is the size of a high-school gymnasium. Duthie then looks to her and says, "What are we doing Ellen? I don't know." They confer quickly and, as the break ends, Duthie introduces a segment on the World Cup of Hockey without missing a beat. During another break, Duthie looks toward the crew and says, "Turn down my [microphone]. I'm going to the bathroom."

"We assemble all sorts of stuff, but today is Duthie and his brain," Dryden says. "He is so quick on his feet, he processes information so quickly. It's why he wins all those awards."

The importance of the behind-the-scenes people is shown when, after a long, eventless morning, there is a trade involving an NHL regular at 1:10 p.m. The Arizona Coyotes send forward Mikkel Boedker to the Colorado Avalanche for forwards Alex Tanguay and Conner Bleackley and defenceman Kyle Wood.

Duthie shouts, "Finally!" As this is going on, there is much motion at a small table at the front of the room under the direction of Reda. Producers John Horn and Aaron Bronsteter and freelancer Josh Rimer are the ones working the phones to land traded players for interviews ahead of a competing show on Sportsnet.

Wins are counted in not only scoops on trades, but getting the traded players on the air first.

In what seems like seconds after Duthie shouted, "Finally!" Rimer tells Reda he has Boedker on the phone. Word is passed to Duthie and at 1:12 p.m., two minutes after the trade was announced, Boedker is talking to Duthie on the air. As this is happening, over on Sportsnet its panel is still chewing over the trade. Twenty-five minutes later, there is still no sign of Boedker on Sportsnet.

This is not an accident. Rimer works for a sports-memorabilia dealer lining up players for paid appearances at souvenir and autograph shows. NHL players know a call from Rimer means money in their pockets, so they always take his calls. No one has a longer list of their cell numbers than he does. In the previous three years, Rimer worked for Sportsnet on deadline day. But the network was slow to call this year, and he accepted an offer from TSN.

This pays off for the rest of the afternoon as the trades finally start coming. Sportsnet's Elliotte Friedman breaks the Kris Russell trade from the Calgary Flames to the Dallas Stars. But Rimer and company manage to get Russell first, and they then score Eric Gelinas and Brandon Pirri in succession.

But it is a long slog before those relatively minor deals happen. In what all agree is the slowest deadline day in memory (thanks to all the stars traded in advance), the TSN show leans heavily on comedy. There's a kiss-cam spot, a race around the studio of the mascot Canadian prime ministers, a regular feature at Ottawa Senators games, and a trivia contest with a cook from the TSN cafeteria.

The showstopper, though, turns out to be the T-shirts. Seconds before a commercial break ends at 12:45 p.m., Pfeffer silences the room with a loud whistle. "Listen everyone, this is the segment with the T-shirt cannon. I don't want anyone to get hurt," she says.

Then, as Jennifer Hedger did another update from the SportsCentre desk, Pfeffer led a group of people into the studio. As soon as the update finishes, the camera turns to Duthie, who is holding the T-shirt cannon. He fires a few T-shirts into the assembled crowd, then turns the gun over to Biron.

Just as Biron takes the air gun, Hedger unwittingly walks by between the crowd and Biron. He fires a T-shirt at Hedger from no more than five metres away. She falls onto the bare concrete floor, but makes a clean catch, cradling the tightly rolled shirt against her midsection, and gets up unscathed – no mean feat when you are in high heels and a dress. The catch becomes the highlight of the day.

But that's a low bar: As Duthie notes, "We have one trade so far, folks. We've been doing this for four hours." 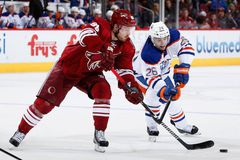 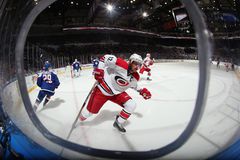 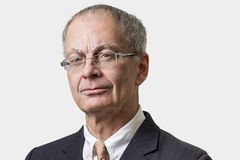