Some of the funniest emails that Olympic dance champions Tessa Virtue and Scott Moir get these days go something like this:

"Just give in and date."

"You're in love and we can see it and quit fooling yourself.''

This makes them laugh, heartily.

They are business partners, they say, and nothing more, but speculation has been running rampant as people watch their apparent intimate glances as they dance to Gustav Mahler's winsome Fifth Symphony. Was ever there a match made more in heaven? How can they work so closely on such material and not feel a little butterfly or two?

Well, it's easy to do, not so easy to explain. Their relationship is unique, hard to qualify.

"People always ask you are you like brother and sister? Are you like a married couple?'' Moir said. "It's really original and it can't really be explained.''

Their business relationship is their first priority, they say. And they've maintained it that way for the past three or four years. "But this one, we've really grown together personally,'' Moir said. "And that's really been a help when you get on the ice and you look at each other, you really do feel comfortable. It's a lot easier to skate.''

They are different people learning how to be one, and that's what makes their dancing so special. "It's been a little bit of a challenge (being as one), especially the last couple of years, but it feels really great right now and we can skate together if we're like this.''

Virtue says they are the only two people they know who has experienced what the other has. They've been through every up and down, every adventure sp they have a solid business working relationship. "And we're able to get on the ice every day and be productive and work together, no matter what is going on.''

But how can they separate business from something else, especially when they dance so closely, cheek to cheek? If they are just friends, do they ever get into giggling fits when they hit a romantic pose.

Not really. They're at work and they're serious about what they do. They love their work and have a passion for the art of it.

But once this year, something unusual happened. They came out of a lift, and they were quite close to each other. Then Virtue got really close. "We actually kissed and it was so funny,'' Moir said. "Because then we went to do the move the next time and she…"

"We couldn't look at each other,'' Virtue said, laughing.

"You couldn't look at me?" Moir said, jokingly. "It was an accident. We joke around a lot.''

"We kissed for the first time in 13 years,'' Virtue said.

So if there is a hint of a little something, Virtue and Moir set it to rest, sort of.

They haven't dated since Virtue was seven years old and Moir was nine.

"We got over that divorce pretty quickly,'' Moir said. "We actually started talking.''

Moir said that - at their tender ages - they went to a summer camp and were set up by Moir's cousin and Virtue's sister. "We barely talked,'' Moir said. "We could barely hold hands. We would probably giggle back then

"Never got that first kiss,'' Moir said. "Maybe that's why I had to break up with you.''

The breakup wasn't necessarily done with much courage. Scott's little friend dialed her up and Moir blurted: "Tess, I don't want to go out with you any more.''

"And he hung up the phone,'' Virtue said.

Just when you think that all was said and done years ago, Moir says he doesn't think the business relationship they share would necessarily scare them out of dating in the future.

But then he adds: "But I don't see that side of it. That connection was never really there after seven and nine.

Moir's aunt, Carol, seemed to think it was funny that little Virtue and Moir were in a relationship, so she figured she should try them out on the ice, Moir said.

Out of an early divorce grew an Olympic and world champion.

Perhaps their relationship is just more solid and long-lasting than romance. It will be really odd, Virtue says, when they finally part ways when their dancing career is finished. They experienced a mild measure of it last season when Virtue was injured and could not skate.

"That was two months that we didn't see each other,'' she said. "It was really odd. When we got back on the ice, we were out of the rhythm of working together. It will certainly be a transition period.''

They always joke that when they are really old, they'll be taking ballroom dancing together. "So we'll be hanging out for sure, and I can't imagine not being in each other's lives in some way.'' 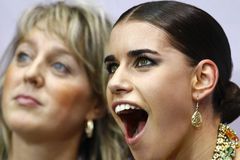 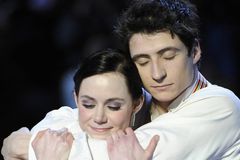