Vasek Pospisil is totally exhausted, and he couldn't be happier about that.

The 23-year-old rising Canadian tennis star just finished his whirlwind breakout season on the ATP Tour, where he now ranks No. 32, more than 90 spots higher than where he started it. He had kicked off the season battling mononucleosis and starting out with a new coach. Yet he rallied to his best-ever results. There was his inspired march to the Rogers Cup semi-finals where he met fellow Canadian Milos Raonic, his near upset of Roger Federer in the semis of last week's ATP 500 event in Switzerland, and his role in Team Canada's historic Davis Cup run.

"I do feel exhausted," Pospisil said on a season-ending conference call. "It's been an incredible year, so it's nice to be tired, because it means that I've played a lot of matches and it's been an emotional journey."

His ranking suggests the 6-foot-4, 185-pound youngster from Vernon, B.C., might find himself seeded at a Grand Slam event for the first time come January's Australian Open.

"After the Rogers Cup, my coach and I sat down and said 'we reached our Top 50 goal already so let's' set another one," said Pospisil, the second-ranked Canadian behind Raonic.

"The goal was to reach the top 32 and maybe be seeded at the Australian Open, so hopefully it will be enough to get a seed in Australia."

Pospisil had built a foundation while working with Frédéric Niemeyer, Canada's top-ranked singles player a decade ago, as well as a Davis Cup player; now a coach with Tennis Canada. This year, Pospisil took his game to a new level when he began working with a new coach, retired French tennis player Frédéric Fontang.

"The chemistry between Vasek and Frédéric was incredible," said Louis Borfiga, Tennis Canada's vice-president of high performance. "Frédéric told him to be more aggressive on the big point because he was playing a little defensive. Vasek is much more aggressive now and his experience this year has been very important."

Pospisil says over the past few years, he had become too comfortable rallying in the backcourt, waiting for opponents to make mistakes.

"I feel like Frederic nailed it, as to the things I needed to improve," Pospisil said. "I knew the way I was playing wasn't the right way to play to reach the Top 50. I needed a more aggressive approach. It has become more natural for me to be more aggressive, and that's a key to my success this year."

Pospisil admitted he's a little disappointed not to have been nominated for the ATP's most-improved-player award. He chuckled humbly when asked what he plans to do with the $600,000 in prize money he's accumulated in recent months, nearly double what he had earned in his entire career leading up to 2013. He would like to spend some money on his parents, perhaps replace an old laptop he's been using for years, but admitted he doesn't buy lavish items for himself.

He will train during the six-week off-season in Bradenton, Fla., at IMG Academies again this year. The training will include some technical work on his game that he and Fontang didn't have time to do last off-season because of his lengthy battle with mono.

He says Canada's Davis Cup victories early in 2013 lit a fire under him as a singles player and remain some of his fondest memories of the season. His ATP results early in the year weren't stellar – mostly qualifiers or first and second-round losses – but he trusted in his training with Fontang, and it began to pay off.

By the Rogers Cup, he was on such a roll that he was dashing past top opponents, such as No. 20 John Isner and No. 6 Tomas Berdych in Montreal. Pospisil's passionate, fist-pumping topped television highlight reels. His first ATP semi-final against fellow Canadian Raonic was watched coast to coast, and the Twitter hashtag #AnythingIsPospisil took off.

Last week, he fell just shy of beating sixth-ranked Federer in a three-set semi-final thriller in Basel before a pro-Swiss crowd to end his season. He will need more meetings with the world's finest players in order to grow his ranking further next season.

"The path to the top 15 is pretty clear – I know what I need to do – but getting there is a different thing," Pospisil said. "If it takes a year, two years, a month, so be it. I'm looking forward to going up in the rankings. I believe in myself and what I'm doing, and I have to make sure I don't get impatient." 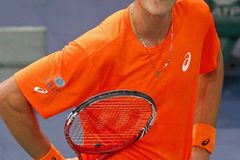 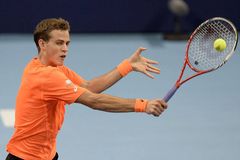