One recent breezy evening in Montreal, Juan Martin del Potro traded powerful serves and thunderous forehands with Milos Raonic for two otherwise uninspiring sets, won by Raonic. This tale of tall tennis players highlighted what many have contended – and in some cases feared – will be the future of men's professional tennis.

In another setting – a basketball arena, for instance – del Potro, at 6 feet 6 inches, and Raonic, at 6 feet 5 inches, would have stacked up as average-size competitors. On a tennis court measuring 78 feet long by 36 feet wide, they looked a little out of place, even against each other, like neighbouring apartment towers hovering over a quaint suburban village.

Raonic's new coach, Ivan Ljubicic, said that was only because longtime followers of men's tennis had been conditioned to watching smaller or more average-size men compete. But the trend toward taller players is indisputable, he said, while stopping short of proclaiming the sky as the limit.

"I don't think the tour will become a 6-foot-7, 6-foot-8 tour," Ljubicic said. "Yes, if you are that size, it could be an advantage, but tennis, I think, will be more about 6 foot 5, where you can make the most out of the height without giving up too much in the other areas. And if the tall guy can move really well, then you have something special."

Ljubicic, a 6-foot-4 Croat who retired in 2012 after 14 years on tour, was an example of the sport's growth spurt. As further proof to support his argument, he cited Croatia's 2005 Davis Cup championship team, which included Goran Ivanisevic (6 feet 4 inches), Mario Ancic (6 feet 5 inches) and Ivo Karlovic (6 feet 10 inches).

Echoing Ljubicic, Ivan Lendl offered a generational arc from him to Andy Murray, the holder of the Wimbledon and U.S. Open titles.

Tennis players have been getting bigger for years. When Lendl emerged as a force in the early 1980s, rare was the top-ranked man who was more than 6 feet. A decade later, Andre Agassi, at 5 feet 11 inches, and especially Michael Chang, at 5 feet 9 inches, were considered undersize overachievers.

In those days, Boris Becker, at 6 feet 3 inches, contended that men's tennis was not only trending tall but would eventually be dominated by players well over 6 feet. Although part of his prediction has not come true, it may be premature to say he was wrong.

Heading into the U.S. Open, nine of the top 32 men's players were at least 6 feet 5 inches – the tallest being the American John Isner, at 6 feet 10 inches. During this summer's hardcourt season leading into the U.S. Open, del Potro defeated Isner in the finals in Washington. Raonic, a 22-year-old Canadian, made the final in Montreal, where he lost to Rafael Nadal. Isner upset No.1 Novak Djokovic in the quarter-finals in Mason, Ohio, and outlasted del Potro in the semifinals before losing in two tiebreakers to Nadal.

"Every sport is going up and up," Lendl said. "Look at basketball – and I don't understand basketball – but I do know that the guys who were playing centre before are playing wings now, or whatever you call them."

A trend does not necessarily become the rule, however. The Miami Heat won consecutive NBA titles without a conventional centre, and small, creative point guards have been in vogue for several years. In men's tennis, taller players have produced increasingly good results, but the very best or great players have been holding steady in the range of 6 foot 1 to 6 foot 3.

Patrick McEnroe, a broadcaster and director of player development for the U.S. Tennis Association, argued that Roger Federer and Nadal, both 6 feet 1 inch, Djokovic (6 feet 2 inches) and Murray are and will remain the perfect fit for a game that demands the body stay low and coiled.

"Tennis is a movement sport at the highest level, especially now with the technology of racquets and strings," McEnroe said. "A male player from 6 foot 1 to 6 foot 4 is going to move much better in a confined space than someone who is 6 foot 5 to 6 foot 10. Obviously, ball striking is also of primary importance, but in a series of stop-start movements, give me the more agile and mobile player all day."

Nadal, a prime example of what McEnroe was talking about, acknowledged that taller players were here to stay and were becoming more difficult to contend with as they become more athletic. He said he was mystified, in fact, why Isner was not a regular top-10 player given his intimidating serve and enormous wingspan.

"My feeling is if these players have the ability to learn a few things and to understand how to play the points, they have a big advantage," Nadal said. "The dynamic of the game and the evolution of the game are going this way."

That said, after defeating Jerzy Janowicz, the 6-foot-8 Wimbledon semifinalist, in Montreal, Nadal called him "the next player in the top five – a future Grand Slam winner."

More than other tall players, Janowicz has a well-proportioned body that allows him to move around the court, especially forward, with surprising fluidity.

Janowicz, who is from Poland, said he had trained since he was 10 "to play flexible and quick, so now I am moving pretty okay and that allows me to use my huge strokes and serve to my advantage."

Del Potro is the tallest man to win a Grand Slam title, upsetting Federer in five sets to win the 2009 U.S. Open. Injuries, mainly to his wrist, have held del Potro back. But he also has faded in gruelling matches, as he did against Isner under a blazing Ohio sun, looking physically spent.

"Tall guys are normally heavier people, so you don't really want to build up muscle on the weights because then it's even more difficult to move them around," Ljubicic said. "They have to really be balanced because the issue is when the ball is hit really low."

"But in tennis today – and this is very important – we don't have fast surfaces anymore. Even though clay is going to be a problem always because of the long points, the courts everywhere are slower, so the bounce is high and that helps the tall player, incredibly."

For that reason, Ljubicic said it was a matter of time before players such as Janowicz and Raonic follow del Potro's lead and break through at a major, presumably on hardcourt or grass.

"Milos is interesting – he's not only tall, but he has legs that are really high up," Ljubicic said. "His body is not so proportional compared to, say, Janowicz, but he is moving better now because we are working a lot on being low, staying low, which was an issue for him. He would go down, but then he would come up and use up a lot of energy. But in next two or three years, he will have to work really hard physically to be able to move well. If he can do that, he's going to be able to reach his potential."

If Raonic and others like him succeed at the highest level, would bigger all around be better? Based on the early evidence, not so much.

Contemporary taller players are no longer the kind that the 5-foot-9 Jimmy Arias played from 1980 to 1994, like the 6-foot-7 Victor Amaya, "who I could have beaten in a race on my hands," he said. But they typically do not play with the grace of Federer, the inspired passion of Nadal or the quickness and versatility of Djokovic and Murray.

Very tall players may hit paralyzing serves and forehands but often lumber around the court in a way that is antithetical to the athleticism that has created a global groundswell of interest and excitement in men's tennis.

Jesse Levine, a 5-foot-9 Canadian-born pro, likened the service games of Isner and Karlovic to him taking "one of these chairs and serving" while standing on it.

"I wish I knew what that feels like, but I don't," he said, adding that he hoped there would always be room for someone his size.

Much as he also believes in the evolving athlete, Lendl offered the little guys a stay of inevitable extinction. Asked for a prediction on when tennis would be the sole province of the tall, he remembered who he is coaching and flashed a furtive smile.

"Not in my lifetime," he said. 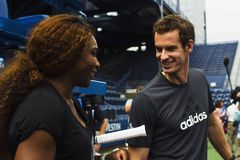