In 2010, former UFC champion Frank Mir was forced to issue an apology after saying he wanted to break Brock Lesnar's neck and make him "the first person that dies due to Octagon-related injuries."

Middleweight title-holder Anderson (The Spider) Silva made headlines this week when he promised to break challenger Chael Sonnen's legs, arms and teeth in their July 7 main event at UFC 148 in Las Vegas.

Instead of asking for an apology, the UFC put out a news release to ensure everyone knew of the outburst.

The release was headlined "The Spider Finally Snaps! Champ Anderson Silva Erupts on Opponent Chael Sonnen During UFC 148 Media Call." A second headline highlighted the quote: "I'm going to break his face and kick all his teeth out."

Silva's exact words are quoted at length in the release.

"This is going to be violent and I am sorry. I'm going to make sure that every one of his teeth are broken, that his arms are broken and his legs are broken. He's not going to be able to walk out of the Octagon by himself. I can guarantee that. He will need a plastic surgeon afterwards."

UFC president Dana White had no problem with Silva's out-of-character threats. His comment on the conference call was simply that he had never heard the champion speak like that.

Speaking later through a UFC representative, White said threatening death is indeed stepping over the line — and the Silva news release headline was worthy in that it was so uncharacteristic of Silva, who is usually more playful than prehistoric.

Because MMA is a combat sport, there is the possibility for over-the-top trash-talking.

And the sport can find itself caught between different emotions. Competitors often touch gloves at the start of a fight to show respect. And occasionally, after savage exchanges, fighters will pause mid-round to touch gloves or even embrace.

On one hand, it developed out of the martial arts, which prides itself on the concept of respect. UFC welterweight champion Georges St-Pierre, for example, emerged from a karate background and says he does his talking in the cage.

"He's a wrestler and doesn't know what martial arts is," Silva, speaking at a news conference in Rio de Janeiro in April, said of Sonnen. "Respect. Respect for country. Respect towards people and respect for human beings."

Speaking at the same news conference, Sonnen said: "I don't have anything against the Brazilian people. I've got something against a Brazilian that's sitting a few feet from me, and maybe a couple of other gentleman. But your women are all OK with me, so feel free to give me a call or pay me a visit.

"But, you know as far as my impression, it's a lot like America. You know when I was a little kid, I remember going outside, I'd sit with my friends, we'd talk about the latest technology, in medicine, gaming and American ingenuity and I look outside and Anderson and the Brazilian kids are sitting outside playing in the mud."

MMA is also an uncompromising combat sport whose promoter is looking for ways to increase viewership. At $59.99 per high definition pay-per-view, every additional purchase can prime profits.

And bad blood sells fights. From Dan Hardy-Marcus Davis to Jon Jones-Rashad Evans, bouts between bitter rivals have proved to be some of the most eagerly awaited.

St-Pierre says Sonnen just got under Silva's skin, with his constant jibes.

"He wants to get into Anderson Silva's head and he did it. That's what he wants, because when you fight with emotion, you don't fight smart.

"That's what Chael Sonnen wants from him."

St-Pierre put up with plenty of trash-talking from Josh Koscheck prior to their UFC 124 showdown in Montreal.

Tired of Koscheck's lip and childish antics during their time as coaches on the recent season of "The Ultimate Fighter," St-Pierre promised "the bully will get bullied."

Koscheck, who had said he didn't like losing especially to "a French guy," absorbed a five-round beating and needed facial surgery.

Sonnen used his wrestling to dominate Silva for the first four rounds when they met at UFC 117 in August 2010. Then the Brazilian submitted him via a triangle choke in the fifth round.

Canadian welterweight Chris (The Menace) Clements wasn't surprised at Silva's recent outburst, given Sonnen's insults to the champion and his native Brazil.

"Anderson's a pretty respectful guy. He stayed quiet for a long time. I think he's just finally got mad," said the native of Chatham, Ont.

"Most fights aren't personal. I'd say 90 per cent of them are just for the sport and it's just our job and we're just doing what we want to do.

"And then the odd guys, they cause trouble."

Sonnen, says Clements, has proved to be a master at promoting fights. And it's worked for his career.

Montreal bantamweight Ivan Menjivar says it takes all types in MMA. But the father of two wonders about fighters talking trash.

"After your sons talk like that? 'My dad said that on TV. Me, I can say it in school."'

In 2010, Mir found himself in hot water after telling a Pittsburgh radio station prior to UFC 111 that he hated Lesnar.

"I want to break his neck in the ring. I want him to be the first person that dies due to Octagon-related injuries. That's what's going through my mind," he said in the interview.

Mir subsequently apologized in a statement issued by the UFC.

"I would like to apologize to Brock Lesnar, his family, the UFC and the UFC fans for my stupid remarks. I respect Brock, all the other fighters, and the sport of mixed martial arts. I'm sorry that I stepped out of line."

At the time, White said he was disappointed by Mir's comments.

"He's been talked to, he regrets what he said, and he won't be saying anything like that again," he said.

Mir later told The Canadian Press he went too far in trying to promote a future rubber match with Lesnar.

"I got a little carried away with trying to make it more enticing and try to add a little bit to it," he said.

He also compared his words to a football player, in the huddle before a game, talking about smashing or crushing the opposing quarterback.

"Those aren't really literal terms they're using, it's a motivational speech, it's a rah-rah-rah-type thing," Mir explained later. "Candidly speaking, maybe I should have saved that more for the locker-room instead of an interview."

White says he expects more than a million pay-per-view buys for the Silva-Sonnen rematch. 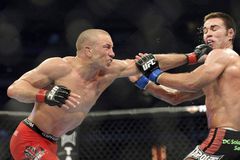