Veterinarian and breeder Garth Henry is planning to inject a humane overdose of a barbiturate – tentobarbitol – into the jugular veins of five of his nine broodmares. His mares – "my girls," he calls them – range in age from 14 to 20 and could live longer than 30 years. The drug will arrest their heartbeats in two minutes or less.

Four of these mares gave birth to colts and fillies this year and are capable of breeding for several more years. The fifth, Plus Package, is 20, and because of her successful track career and breeding career, Henry had planned to give her a home for life. But now, Henry can't justify the cost of upkeep on his farm in Russell, Ont., because the market for their foals is drying up.

"They wouldn't be worth hauling to the sale," he said. "And they'll just be purchased most likely by guys sending them to the slaughter anyway. And it's just not in me to do that."

Seeking sources of funding to address a $15-billion deficit, the Ontario government has decided to terminate a program that sent $345-million from slot-machine revenues to tracks and horsemen in 2011. The decision, announced in March of this year, will result in the loss of 3,600 to 6,300 jobs, according to the draft of a government-commissioned report prepared by McKinsey & Company, and obtained by The Globe and Mail this week. By comparison, General Motors announced plans in June to shut down a consolidated line at its plant in Oshawa, Ont., a move expected to cost 2,000 jobs in June of 2013.

Henry isn't alone in facing the euthanasia dilemma. One of two reports commissioned by the government after its decision estimated that 7,500 to 13,000 race horses in Ontario would be put down if the industry were to be shuttered entirely. The standardbred sector will be hit especially hard, according to the McKinsey draft. "Significant contraction" will reduce races and horses by 57 per cent, as the business isn't sustainable without the slots revenue. At some tracks, slots money makes up more than 90 per cent of purses. Already three of 17 tracks have closed, and McKinsey projects that five or six tracks will remain in operation after the government withdraws support.

Nick Eaves, president of Woodbine Entertainment Group, which operates Woodbine racetrack, says he does not know the fate of next year's $1-million Woodbine Mile or the $1-million Queen's Plate. "The uncertainties are too many," he said. "We are unable to plan for 2013."

About 15 years ago, the province agreed to pay rent of 20 per cent of slots revenues in exchange for the Ontario Lottery and Gaming Corporation placing the machines at tracks. In the win-win deal, a then ailing industry received a cash transfusion as the province gained access to established gambling facilities without having to deal with not-in-my-backyard resistance from neighbourhoods.

After cancelling the deal, the government commissioned two reports to assess the impact on the industry operating in an environment without slots, the first by a three-member panel composed of former government ministers Elmer Buchanan, John Snobelen and John Wilkinson. Few in the industry know of the McKinsey report, which was commissioned as a "third-party check" on the government's own analysis, according to a spokesperson in the office of Ontario Finance Minister Dwight Duncan.

Meantime, the industry is reeling.

"The whole scene is just devastating to breeders," said Hall of Fame thoroughbred trainer Roger Attfield, winner of a record-tying eight Queen's Plates, and last fall a Breeders' Cup race in Louisville. "People don't know whether to breed their mares again, and people who have real estate don't know what it's going to be worth."

At Woodbine's thoroughbred yearling sale a week ago, the average price of the select portion fell by 22 per cent from the year before, and on the final day of the sale, when lesser horses were offered, prices plunged by 50 per cent, according to figures from the Canadian Thoroughbred Horse Society. Gross sales declined by 61 per cent.

Standardbred yearling sales, which are coming up in the next few weeks, promise to be ever worse. Standardbreds outnumber thoroughbreds in the province 18,184 to 7,122, and only 21 per cent of standardbred purses overall are derived from pari-mutuel wagering. The rest is made up of slots money.

"How can you buy, not knowing what's going to happen?" said thoroughbred owner-breeder Eugene George, an international businessman from Breslau, Ont., "There is no guarantee that the purses will be there, and if they aren't there, you lose money."

According to McKinsey, horse racing, including thoroughbred, standardbred and quarter-horse, generated $575-million in revenues in 2011. That will be decreased by $225-million to $350-million. Thoroughbred racing can continue at Woodbine on wagering revenues alone with a modest reduction in race days and costs. For the tracks that survive, the good news is that those left standing would have each race become more profitable for the owners.

The government has announced a $50-million fund over three years to help the industry. The transitional panel responded that the amount wasn't enough to help the industry survive. The Ontario Horse Racing Industry Association asked for $210-million. Duncan said this week that he has an "open mind" about providing financial support for the industry.

A final report, with "fleshed-out recommendations," is due by the end of September, Duncan said. "It's a matter of how much over what period of time," he said. "We think there are five, maybe six tracks that can be viable in Ontario in a commercial way."

A government-commissioned report in 2008 by former Ontario Racing Commission chairman Stanley Sadinsky said the slots deal suffered from one major flaw: The government set no benchmarks as to how the slots money to tracks and horsemen should be used. Some tracks, like Woodbine, Grand River Raceway near Elora, Ont., Western Fair Raceway in London, Ont., and Hanover Raceway in Hanover, Ont., used their share of the money to improve their product and market it, while others did not. The Sadinsky report was shelved.

What emerges is an analogy to addicts in a heroin withdrawal program. But rather than the industry being weaned off its dependancy, the slots program poured increasing amounts into horse racing. Then the government asked the racing industry to quit slots cold turkey. Three tracks, Fort Erie, Windsor and Hiawatha Park in Sarnia, Ont., have already had their slots licences pulled. Windsor, once the toast of the harness set, has shut down.

"As far as I'm concerned, the [government decision] was made too quickly," Attfield said. "There was no warning it was coming. I don't think there was too much homework done on exactly what problems it was going to cause and also what it's actually going to cost the government."

OHRIA president Sue Leslie said the government, by commissioning studies, has at least recognized the industry's large economic impact on the province and the need to sustain it.

The Liberal government – and the interim report – said that awarding the $345-million in slots money to the industry was "poor public policy" and that it would be a mistake to reinstate it.

"I'm optimistic that there is a way forward," said Ontario Agriculture Minister Ted McMeekin, who as a former mayor of Flamborough, benefited from the slots agreement years ago, considering that Flamboro Downs racetrack was in his constituency.

He said the panel found that there has not been a successful horse racing jurisdiction anywhere in the world that didn't get some government support, but that the government does not want to see history repeat itself – with lack of accountability.

"In a lot of ways, if the horse industry is going to be saved, it's really the horse racing industry that's going to save it," McMeekin said.

Nancy O among the fillies aiming for Breeders’ Cup
September 14, 2012 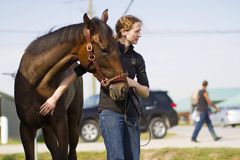 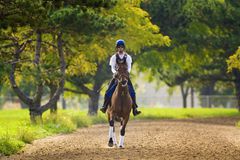 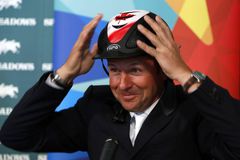 Lamaze insists all is well with Equine Canada
September 5, 2012 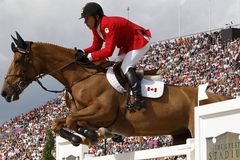