Ian Millar, a 10-time Canadian Olympian, saw his best chance to make it 11 Olympics undermined this past winter when his No. 1 horse, Dixson, required a pair of sinus surgeries, rendering him unfit to compete in the 2016 Olympic Games.

This is the reality of equestrian sport: It isn't enough just for the rider to be fit and top of his game. The horse needs to be as well.

But Millar sees a silver lining in his own misfortune – it could potentially open up the door for either his daughter Amy or his son Jonathon to be chosen for the Canadian Olympic equestrian team in early July.

"When Dixson was unable to go, my son and daughter were both very concerned – in fact, my daughter offered me her horse," Miller explained in an interview. "I said, 'Under no circumstances would I accept.' I told them both to think about something. There would be a big difference between zero Olympics and one Olympics, and 10 Olympics or 11 Olympics.

"At the end of the day, no one's going to remember if I went to 10 Olympics or 11 – but someone will surely remember if you went to one. I said, 'This is your opportunity, you've got the horses, you're ready, you know what you're doing, I'd love you to have the shot.'"

Canada's Olympic team will be chosen by a five-member selection committee that includes Mark Laskin, the chef d'équipe for the Olympic team, and a familiar face at Spruce Meadows where he dazzled on a number of different mounts, including the legendary Damuraz, before he retired from competition.

With less than a month to go in the process, Laskin says there are still "quite a few question marks right now.

"The competitions here and the next two weeks are crucial because there are three or four of about 15 [horse-rider] combinations that are fairly even, so we're looking for someone to step up," Laskin said. "All the riders know what's at stake. And there's a lot of pressure on them, so it'll be interesting for us to see how they respond. We're looking for a couple of riders to elevate and show they deserve to go."

Millar rode his new horse Teddy du Bosquetiau in Saturday's RBC Grand Prix, but took down three rails and finished 29th in a field of 33. The top Canadian was Eric Lamaze on Fine Lady 5, who had a double clear round and finished second in the jump-off behind Ireland's Conor Swail.

Among the young Canadian riders competing, Kara Chad on Bellinda did herself the biggest favour with a sixth-place finish, a single time fault spoiling an otherwise perfect ride.

Amy Millar on Helos wasn't bad either – one of six riders to complete the course with just a single rail down.

Spruce Meadows enlisted Guilherme Jorge of Brazil, who is designing the Olympic course in Rio, to set the course for Saturday's Grand Prix. Barring accident or injury, Lamaze, along with Yann Candele and Tiffany Foster, are favoured to earn three of the five spots on the Olympic team, leaving two more open.

On Sunday, in the ATCO Cup, both Foster and another young Canadian, Ben Asselin, had double clear rounds in an event Swail won again.

Foster competed for Canada in the 2012 Olympics, where officials controversially pulled her horse, Victor, from the competition after she'd successfully completed the first round, citing the hypersensitivity protocol put in place by the sport's governing body.

Back in 2008, Foster broke her back and as a result now rides with what she describes as "a couple of titanium rods and clips and plates and screws in my spine. But it's all right. It could have been worse."

In addition to Victor, Foster also has another terrific mount, Tripple X III, available to ride in Rio.

"Two things are really important in riding – experience and confidence – and both come from having great horses; and great horses come with great owners. There are tons of great riders walking around with jeans on because they have nothing to ride. The reason I'm able to have any success is because of the support of the owners [Artisan Farms].

"You have to have the horses and the people willing to support you – going to Europe, coming to Spruce Meadows – because this is a big endeavour, and an expensive proposition, to do these kinds of shows."

Foster is 31 and in the prime of her career. Millar, at 69, competed for Canada for the first time at the 1976 Olympics in Montreal and is still riding competitively.

How is someone who qualified for his pension four years ago able to compete against riders young enough to be his grand children?

"Riding is more about skill and timing, and when it becomes physical, it means we're in trouble," Millar said. "I work out an hour every morning and my doctor told me just the other day, 'That's your salvation. If you didn't do that, you wouldn't be doing what you're doing.'

"My program is a combination of stretching and strength. In the old days, nobody stretched. Now, most of these young riders, you go down by the end gate, they've got their legs up and they're stretching all their muscles before they get on that horse. That's just something we've learned over time."

If Millar doesn't make it to Rio as a competitor, he's hoping to go as a cheerleader – for one or both of his children.

"I was always passionate about horses from my earliest days – and I'm just as passionate about it today as I was then," he said. "What really makes it fantastic is my son Jonathan and my daughter Amy are also in it with me.

"And so with all the things that have perhaps become a little more difficult over the years, I have someone to share it with, which is very important." 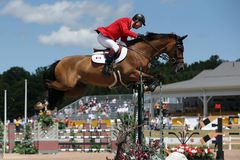 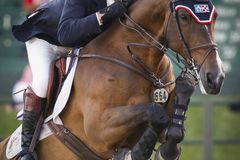 Ian Millar, Hickstead to be inducted into Jump Canada Hall of Fame
September 18, 2012 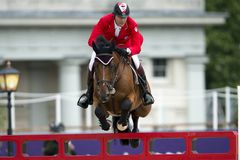