The modern U.S. Open tennis player is a master of racquet minutiae. In pursuit of the tiniest advantage, tennis stars tinker with their racquet's weight, balance, string properties and handle size. The most fanatical adjust their string tension according to the weather.

So when the U.S. Open kicks off in New York on Monday, who will the world's greatest tennis players trust with their long list of specifications?

A world-class stringer, no less.

"Whatever floats your boat, man," says Joe Heydt, one of 15 stringers selected to the Wilson stringing team that will churn out racquets for the majority of players at Flushing Meadows over the next two weeks.

Recent leaps in racquet technology mean that stringers are accommodating an increasingly long list of variables, including width, length, balance, handle dimensions, string type and patterns. Racquets must be freshly strung the day of a match, because the longer they sit, the more strings relax, or lose tension. And because players can detect even the tiniest deviations from their favoured racquet specifications, they use the same stringer for the duration of the tournament in order to eliminate the slightest individual biases.

This also means stringers such as Heydt are front-line witnesses to the most pivotal technical innovations in tennis. As they adhere to players' requests, they see the trends as they emerge. And one innovation that has revolutionized the game most recently is the type of strings that top players are using.

"When [polyester] strings hit the scene, that really changed how aggressive the game could become," Heydt said.

In past decades, most top professionals were using a string category known as "natural gut." Made from the intestine of a cow, the strings are softer and more forgiving than synthetic products, allowing for sensitivity and feel. Their sling-shot properties also generated power. But today, natural gut strings have almost entirely been replaced by polyester strings, which come in a wide variety of shapes, thicknesses, and stiffness. They are stiffer and break less often. Most importantly, they allow for greater topspin, and therefore greater control – unleashing a whole new game dynamic.

"The pros today don't need more power – they need more control. They already hit the ball a ton," explains Dan Kerr, a veteran Canadian stringer who has strung at the U.S. open and numerous Davis Cups, among other tournaments.

Younger players such as 26-year-old Rafael Nadal, who have reached maturity during the age of polyesters, use only polyester strings. Older players are embracing them more slowly: Roger Federer, 31, changed from all-gut strings to a hybrid model. He uses gut on the main (vertical) strings and polyester on the cross (horizontal) strings. In theory, poly strings help him harness and control his power, and cuts down on gut's springiness, while the gut gives him that extra feel.

"Gut is definitely old school, but at the same time, the type of game that Federer plays ... he can handle the gut in his racquet because his style is very smooth and a little more calculated. Whereas Rafa is very explosive and very quick. And that style lends itself more to poly than gut," Heydt says.

Serena Williams switched this year from all-gut to a hybrid string pattern, says Heydt. He remembers watching her dominate Maria Sharapova at the Olympic gold-medal match and wondering if the combination helped give her that extra edge.

But are new string varieties giving players an unfair advantage? Not yet, says Stuart Miller, head of the technical commission for the International Tennis Federation, the sport's governing body. His team tests new products to make sure that they aren't giving players unfair advantages or rendering the game unrecognizable.

New string varieties are part of the reason why professional tennis rallies are becoming more base-line dominated compared to the 1980s and 1990s, he said. With the extra spin, the players can unleash their powerful swings but still keep the balls dropping into the court. That, in combination with the lighter racquets and larger racquet head sizes (which create a larger sweet spot), has made the game faster and more explosive.

Still, he says, the changes haven't compromised the game enough to warrant a ban like the 1978 ban on double-strung "spaghetti-strung" racquets. The dense string pattern added so much topspin, that top-seeded players with traditional string patterns were being upset by virtual nobodies wielding the reviled spaghetti racquets. "Even today it would provide a step-change in the nature of the game," Miller says.

Like in any sport, equipment manufacturers and the players themselves will continue to push the boundaries with new innovations, Miller said. Until another one crosses the line, stringers such as Heydt will continue to field ever more particular requests. 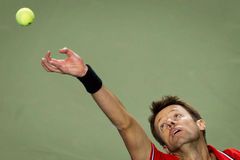